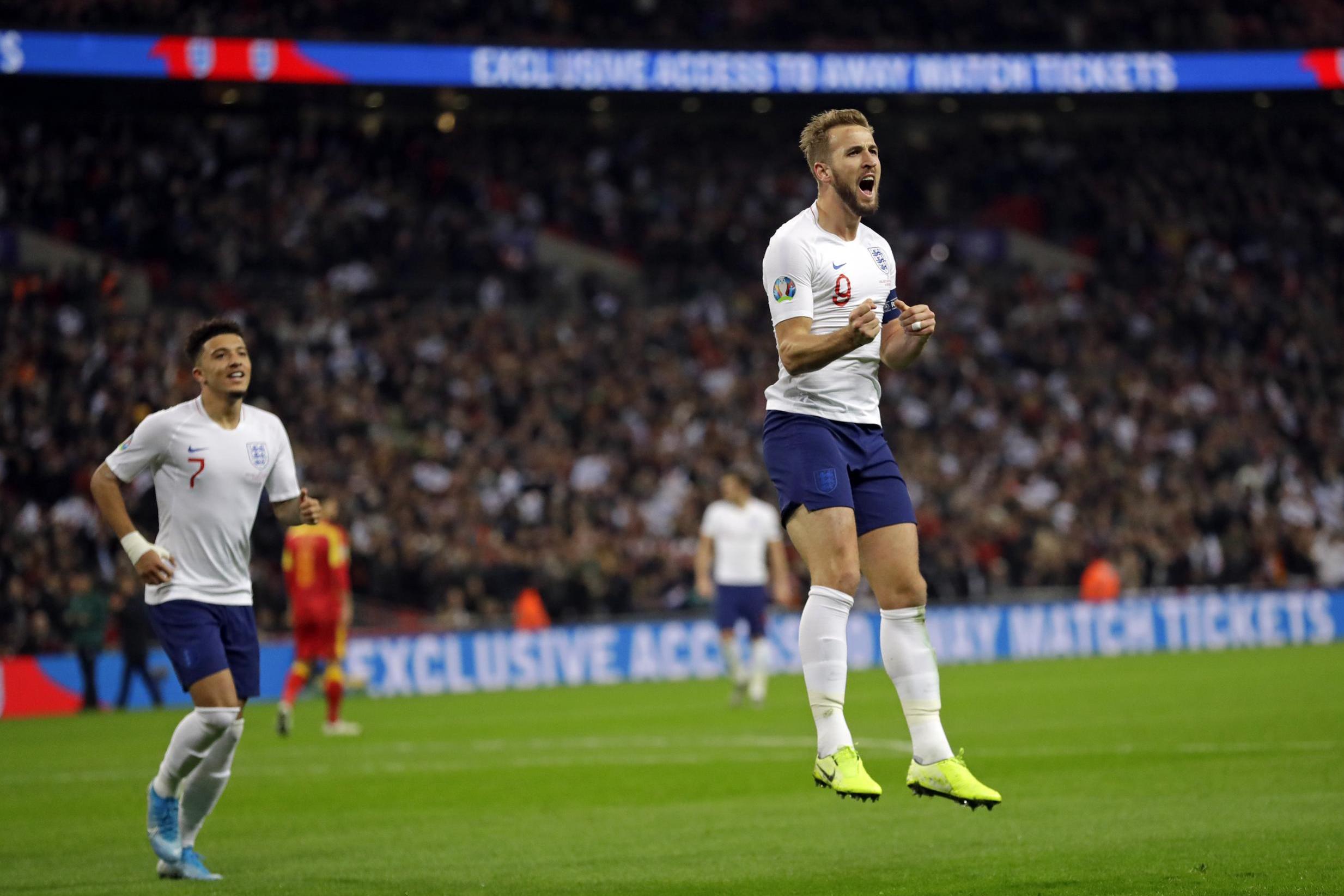 Welcome to the Evening Standard’s live coverage of the Euro 2020 qualifier between England and Montenegro.

Gareth Southgate’s side needed just a point at Wembley tonight to secure qualification to the next summer’s finals, in what was a historic fixture for England: The 1000th match in their history .

Raheem Sterling did not feature after being dropped for the match after confronting Joe Gomez at St George’s Park on Monday – but they hardly missed the forward as they ran out 7-0 winners.

England were 5-0 up by half-time thanks to a hat-trick from Harry Kane along with goals from Alex Oxlade-Chamberlain and Marcus Rashford, while Tammy Abraham scored after a Montenegro own goal after the break to seal qualification in real style.

Follow all the reaction in our match blog below.

Right, that’s it from us tonight.

It was a near-perfect evening for England, celebrating their 1,000th men’s game with a 7-0 win which sealed qualification for Euro 2020 – but those Wembley boos for Joe Gomez have tainted things.

We will be back in the morning with more news, reaction and analysis to tonight’s events.

Thanks for joining us – bye for now.

“No England player should ever be booed. We are a team and Joe has done nothing wrong, I made that clear earlier in the week so I don’t understand that.

Raheem Sterling has leapt to the defence of England teammate Joe Gomez, after the Liverpool defender was booed by fans when coming on as a substitute during Thursday night’s win over Montenegro.

Sterling was dropped for the game, which saw England secure qualification for next summer’s European Championships, after he confronted Gomez in the canteen at St. George’s Park, the day after the pair had clashed on the field during Liverpool’s 3-1 Premier League win over Man City.

The City star has apologised, and the pair are back on speaking terms, with Gareth Southgate stating on Tuesday that Gomez had done nothing wrong and that the squad was ready to move on.

However, when Gomez replaced Mason Mount in the 70th minute of the 7-0 win, a section of the Wembley crowd booed, prompting Sterling to speak out.

“To all the @England fans,” he wrote on Twitter. “I wanted to leave things at it was but tonight I have to speak again : it was hard for me to see my team mate get booed for something that was my fault.

“Joe hasn’t done anything wrong & for me to see someone who keeps his head down and work hard especially after a difficult week for him to be booed when he came on tonight was wrong. I’ve taken full responsibility and accepted the consequence. I felt as though I had to say this get home safe every one.”

Gareth Southgate has been speaking to ITV

What pleased you most? – “The attacking play in the first half – really good movement, super quality of passing and crossing and clinical finishing.”

On winning the group – “We know it’s a group that we should win comfortably, but you can see around Europe there are other countries that struggle to score goals like we have.”

On the attacking talent ahead of Euro 2020 – “We’ll have to get both ends of the pitch right. We conceded a couple of chances tonight that we shouldn’t. There’s still work to do without the ball but we are improving.”

Harry Kane has been speaking to ITV

On moving onto 31 goals, passing Alan Shearer – “We all know how Shearer was at scoring goals – hopefully a few more to come.”

On Sterling missing out – “We made a decision as a group, the gaffer spoke to me and a few other senior players and that was the decision we came to. We’re a group, things happen, and we move on, tonight showed that.”

A thousand games done, and England are off to the European Championships.

90 mins: Just a couple of minutes to be added…

The fans are filing out of Wembley already at the end of an historic and satisfying night for England, their 1,000th men’s senior international marked by emphatic qualification for Euro 2020.

Southgate will have hoped England would produce a performance to consign the Sterling-Gomez spat to history but the response from some fans to the latter’s introduction as a substitute at Wembley means there is more work to do.

88 mins: The national anthem is ringing around Wembley now. The next time England are here for a competitive fixture will be in the group stage of Euro 2020.

And another first on this night of landmarks!

Tammy Abraham slides in to put away Sancho’s cross for his first international goal.

It appeared as though Joe Gomez was booed by some supporters when coming on as a 71st-minute substitute for Mason Mount. I’m really not sure why.

Television cameras showed Raheem Sterling applauding as Gomez walked on and the Liverpool defender has by all accounts behaved impeccably since Monday’s incident at St George’s Park.

77 mins: The Mexican Wave has started, and this one has gone a little flat, perhaps unsurprisingly.

71 mins: A change for England, and a high profile one – Joe Gomez comes on for Mason Mount.

Alexander-Arnold has gone into midfield…

Comical. Rashford is electrifying down the left, and should probably square for Sancho, but his shot is parried, then deflects up off his teammate, into the path of Mount.

His sidefoot effort is heading well wide, until the backtracking Sofranac bullets in off the underside of his own bar.

62 mins: England have looked such a threat at set-pieces tonight, which will encourage Southgate, because it was so key at the World Cup but has fallen away a little since.

Maguire is up best to meet Chilwell’s latest corner, but can only head over the bar.

If this performance will make Southgate feel vindicated in one sense for dropping Raheem Sterling, a lively cameo from James Maddison on debut would be the icing on the cake.

Maddison was embroiled in controversy last month after being pictured in a casino upon his release from the squad due to illness but Southgate included him again regardless and the 22-year-old finally makes his debut with a little over half an hour to strut his stuff.

57 mins: An England debut for James Maddison as he replaces Oxlade-Chamberlain, and a rare bit of time off for Harry Kane, who makes way for Abraham.

Lovely football again from England, Alexander-Arnold cutting back for Kane, and he fires at goal, but it’s well stopped.

Mount puts the rebound in, but the flag is raised – very tight.

54 mins: The tempo has dropped and the atmosphere is a little subdued now.

Tammy Abraham and James Maddison are stripping off to try and come on and change that.

The match will be televised for free on ITV 1, with coverage from 7pm. Fans can also live stream the match online via the ITV Hub and app.