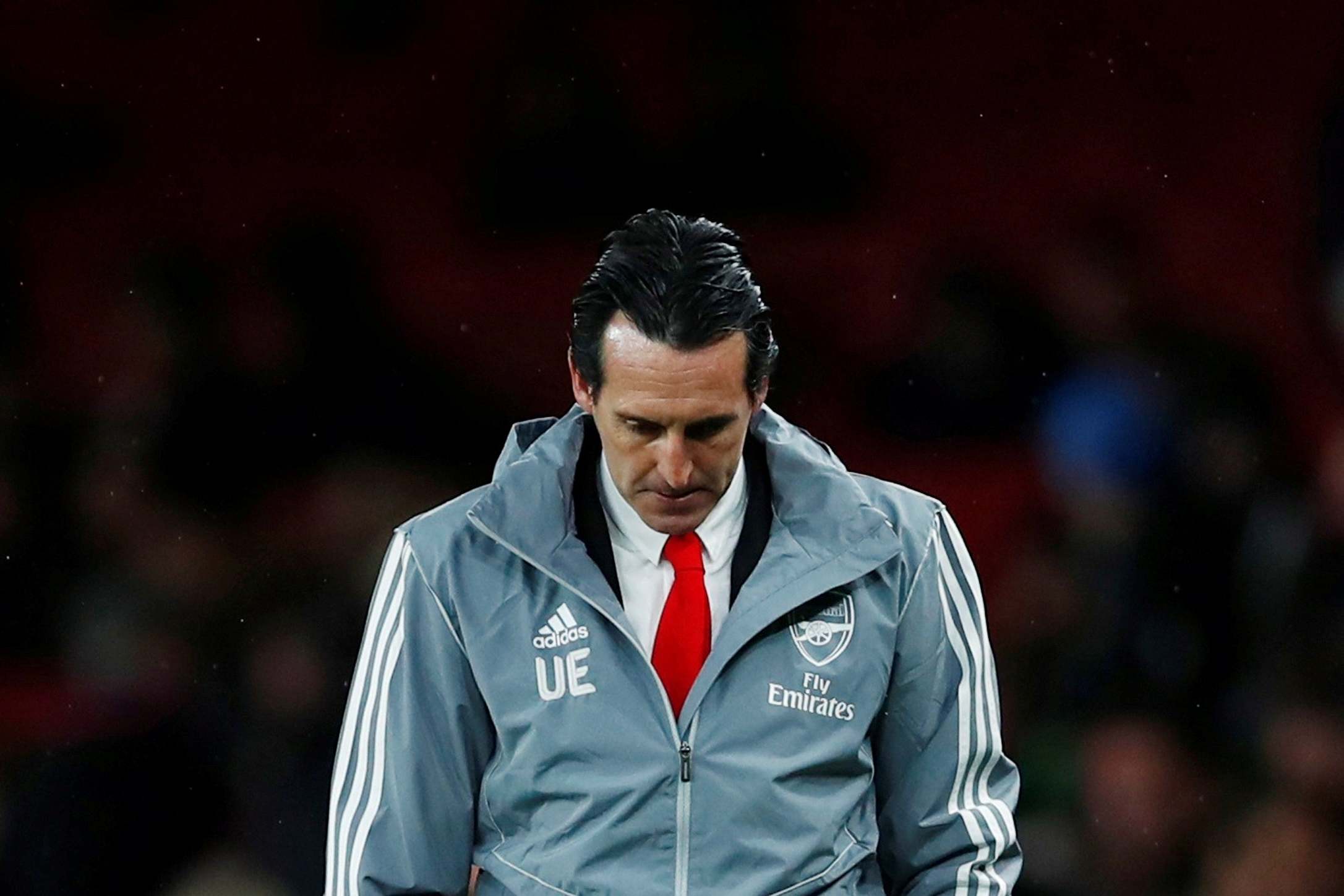 Welcome to the Evening Standard’s LIVE Arsenal coverage as Unai Emery clings to his job after the Gunners’ feeble surrender to Eintracht Frankfurt​ on Thursday night.

The 2-1 loss extended the their winless run to seven and heaped even more pressure on under-fire Emery, with plenty of those who bothered to turn up calling for the manager’s head at Emirates Stadium.

Pierre-Emerick Aubameyang’s first-half strike had Arsenal on course for a much-needed win in front of a sparse crowd in north London.

But Frankfurt rallied and left north London with a win courtesy of Daichi Kamada’s nine-minute brace.

Given the fact no Frankfurt fans were allowed to attend Thursday’s game, and Arsenal placed strict restrictions on ticket sales, this was always going to be a low turnout.

Officially tickets sold stood at 49,419 – but given around 45,000 of that includes season ticket holders – it was actually much lower.

A fair estimate would have the crowd between 25,000 to 30,000, making it one of the lowest attended games at the Emirates in history.

It would certainly rival the crowd that turned up for BATE Borisov back in 2017, which was equally low.

The Arsenal Supporters’ Trust warned Standard Sport before the game around 50 per cent of season ticket holders would not turn up and they appeared to be right as the Gunners’ hierarchy were sent a message about the mood among fans at the moment.

Like the attendance, Emery needs circumstances to improve – and fast.

You were beginning to wonder if there was ever a way back for Granit Xhaka at Arsenal.

After his public falling out with fans on October 27, the midfielder was stripped of the captaincy and left out of all the subsequent match-day squads.

In fact, until Thursday night, it had been two months since he had pulled on an Arsenal shirt.

Emery, however, finally brought him back in from the cold for this match with Eintracht Frankfurt. It was a telling selection by the Spaniard – not least because the Emirates was half full – but more so due to the fact he is fighting for his job.

If Emery is, as he says, taking things day by day at the moment then he cannot afford to not play his strongest team. Thursday night was perhaps an indication that Xhaka falls into that category once again after his exile.

Who said he doesn’t know what winning feels like? The Arsenal boss is the massive 2/13 favourite to go next on the Betfair Exchange.

The Gunners face Norwich at Carrow Road on Sunday and it remains to be seen if he’ll get another game to spark a reversal in fortunes.

Senior figures at Arsenal are due to meet this morning and discuss the club’s alarming run of form.

The Gunners are winless in seven and, having led in five of those matches, have repeatedly failed to close out games.

The Times report that Arsenal are sounding out candidates to replace Unai Emery after Thursday night’s defeat to Eintracht Frankfurt.

Emery’s assistant Freddie Ljungberg is said to be a strong contender, while former Gunner Mikel Arteta and Nuno Espírito Santo have also been strongly-linked.

Frankfurt offered very little, ending with four shots on target. Still, Emery felt his below-par side were unfortunate to lose.

“I think we deserved more,” he said.

“We controlled the game in the first half, we scored one goal. In the second half we started the same, we needed to score a goal but we lost the control of the game after 15 minutes and they scored two goals.

“I think we improved in the first half and we improved also some things to make sure of our improvement and take the three points.”

Keown: Everything was missing – this is relegation form

Winless in seven… Arsenal never experienced as poor a run across 1,235 games under previous manager Arsene Wenger, whom Emery replaced in May 2018, after the Frenchman’s reign of 22 years.

Emery had “taken the team as far as he can”, said former Arsenal defender Martin Keown.

“We witnessed an absolute shambles of a performance in that second half,” Keown, now an analyst, told BT Sport.

“The team selection, the team motivation, the substitutions, the performance — everything was missing. This is relegation form. Do the club realise how tricky this will now be?

“There are football people at the top of the club that need to make the decisions… because otherwise Arsenal will plunge even further down the table.”

Officially, 49,419 tickets were sold but in truth it was the lowest attendance for a first-team game in the history of a stadium that opened in 2006.

With the sparse crowd unable to create any sort of meaningful atmosphere it was up to the Arsenal players to bring the game to life – and they failed to do so once again.

By the end, it was a crop of Frankfurt supporters – officially banned by UEFA for attending the game – who were being heard over the home fans, plenty of whom were airing their grievances towards Emery, calling for him to leave and unveiling printed posters criticising his approach.

Arsenal needed a point to qualify…

Where does this leave their Europa League campaign?

Despite the defeat, Arsenal are all but through to the Europa League knockout stages and would need to lose by five goals at Standard Liege next month to fail to qualify.

Arsenal ‘better than we are showing’

“Now our moment is not good,” Emery said.

“We need to win and we need to gain confidence. I think we are better than we are showing; everybody, the players, the coaches and me.

“Now we lost some confidence and we need to win. I can understand the criticism about the team, about me. We are not in a good moment and also as a coach, I had that moment also in my career.”

Let’s have a quick recap.

Arsenal have now gone seven matches without a win and feels like the manager is on borrowed time at the Emirates.

Once again, it was his defence that proved to be his downfall here as Eintracht Frankfurt were able to run out 2-1 winners.

Midfielder Daichi Kamada scored both the goals to extended Arsenal’s run without a clean sheet to nine games and pile more pressure on Emery.

The last time the Gunners kept their opponents out was against Bournemouth back at the start of October and, if Emery does finally get the boot, he will undoubtedly look back at his leaky defence as being a major part of his downfall.

That’s all from us for tonight.

Be sure to head over to the homepage for plenty of post-match reaction from tonight’s matches.

Emery on his job security:

“I am in that situation. I am positive, but also realistic. We lost but there were positives tonight. We improved on the last match here. We are in the Europa League. We have the possiblility to qualify, not tonight, but we are going to take it from there.”

Will he be sacked/concerned about future?
“I see [after] watching the match [I’m thinking about the next match].”

Emery on the fans:

“They help the players. At the last moment we were working, they [the fans] were angry and disappointed. The players were tired. We lost control of the game at 50 minutes and we lost it in that moment.”

“Yes OK but we had some injuries with David Luiz and we had the same with Mustafi. Two injuries means we could not [bring them on].”

Xhaka injury/performance
“But he was good to continue playing [after half time]. His match today was good, he helped the team. He’s playing well.”

“Tonight wasn’t our moment but we won a lot of matches to be top of the group. Our aim is to win away to Standard Liege to finish as first. We want to do that to build our confidence and connect with the supporters.

“We have the last match [to qualify]. We showed we improved in the first half, but then in the second half we conceded a lot of opportunities to score. We had 5-10 minutes which were not so good and they scored two goals. We tried at the end but couldn’t change the result.

“We proved that we had control of the game but the second half 5-10 minutes were positive, the way we were playing. At 50 minutes, we lost control of the game. We tried to change, to come back in the last 20 minutes. But we didn’t push [enough] in that moment.”

Former Arsenal players Martin Keown and John Hartson have not held back in their assessment of Arsenal’s performance tonight.

Keown labelled it “an absolute shambles”, Hartson said the players had “no direction” from Emery.

More on that a little bit later.

But hold on Arsenal fans… THERE IS GOOD NEWS!

Arsenal are still top of the group, a point ahead of Eintracht, after tonight’s result.

Better still, Standard Liege were held to a 1-1 draw away at Vitoria tonight. If the Belgian club won, they would be in with a chance of knocking out Arsenal.

Now, they must beat the Gunners by five goals to progress.

Nicolas Pepe cost Arsenal a club-record £72 million fee this summer. He was an unused substitute tonight.

Alexandre Lacazette, a £52m buy and with five goals in the Europa League last season, was an unused substitute tonight.

Surely, the board won’t be happy with that.

Former Arsenal John Hartson, speaking as a pundit for BT Sport, says the performance was “woeful”.

Loud chants of support from the 0 (officially) Frankfurt fans inside the Emirates tonight.

They might be excluded after tonight but they’ve seen their side beat Arsenal in London – and they will be delighted with that.

“I think we deserved more,” he said after Thursday’s 2-1 loss to Eintracht Frankfurt. “We controlled the game in the first half, we scored one goal.

“In the second half we started the same, we needed to score a goal but we lost the control of the game after 15 minutes and they scored two goals.

“I think we improved in the first half and we improved also some things to make sure of our improvement and take the three points.”

Mark Noble column: When Yarmolenko was put through I knew –...