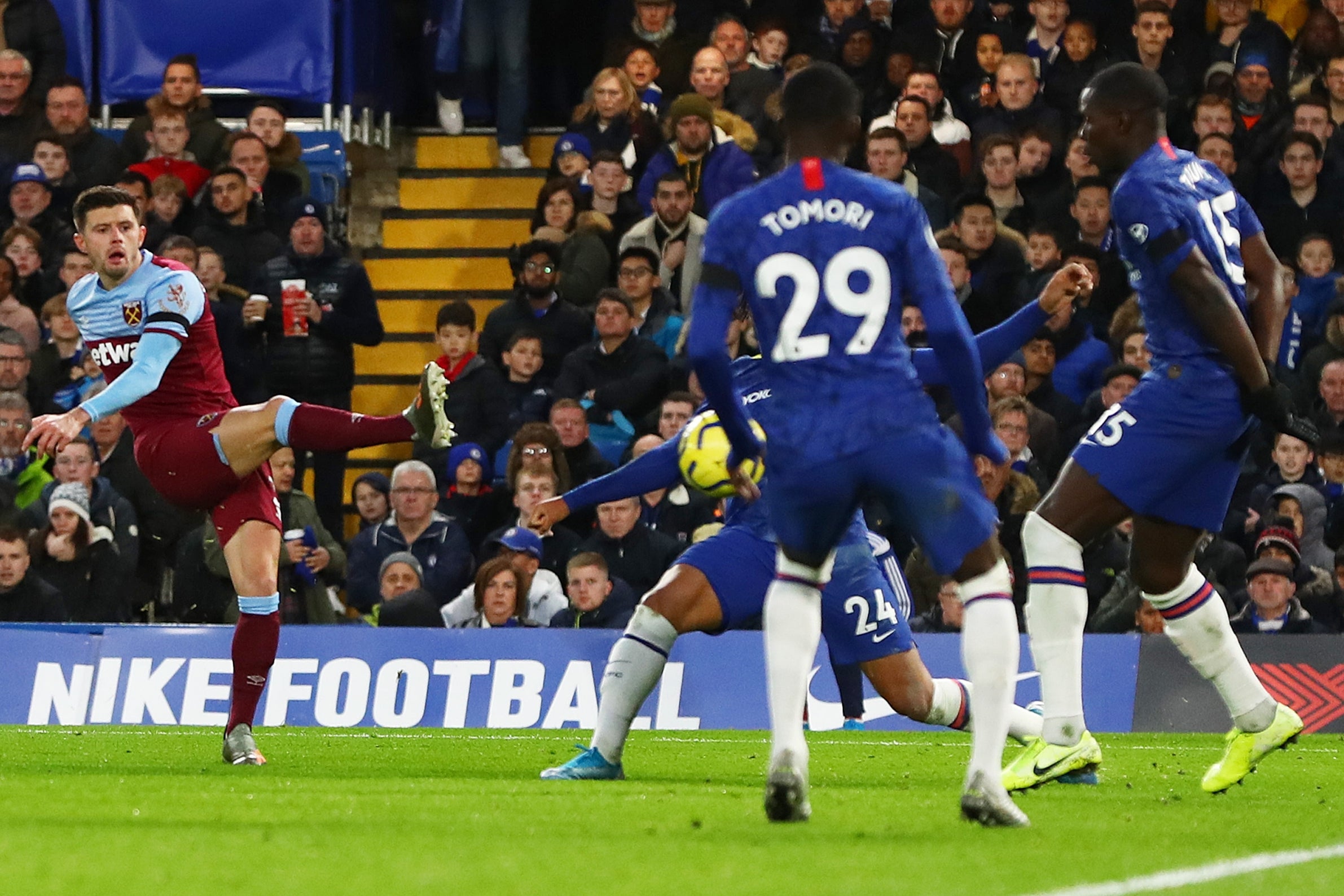 Cresswell’s third league goal of the campaign sealed the 1-0 Stamford Bridge triumph, ending West Ham’s streak of eight matches without a win in all competitions.

The left-back turned Reece James inside out before whipping past Kepa Arrizabalaga to condemn Frank Lampard to defeat in his first match as Chelsea boss against old club West Ham.

The Hammers sealed their first win since the 2-0 home victory over Manchester United on September 22, as Chelsea struggled without injured England striker Tammy Abraham.

Relive the action with Jack Rosser at Stamford Bridge on our LIVE match blog.

What a day for David Martin.

The West Ham goalkeeper was in tears on the pitch at full-time as he was mobbed by his team-mates, and then made his way up to the press box to hug his father (and West Ham legend) Alvin.

90+5 mins: Cresswell booked for thumping the ball away when the Hammers were awarded a free-kick.

88 mins: Yarmolenko goes into the book for a cynical challenge as Chelsea look to break.

71 mins: First change for West Ham as Anderson is replaced by Yarmolenko while Lampard makes his final sub, Giroud off for Hudson-Odoi.

68 mins: West Ham think they’ve doubled the lead but in step Stockley Park and chalk off an Antonio goal for handball in the build-up.

63 mins: Double change for Chelsea, Jorginho and Pedro replaced by Kante and Willian.

60 mins:  Two huge saves from Kepa! From two Snodgrass corners the keeper has to deny a thumping header from Balbuena before managing to smother the ball before Antonio could double the lead.

48 mins: Just what this game needed! Fornals rolls the ball into the path of Cresswell down the left of the Chelsea box.

Cresswell cuts inside onto his weaker right foot and bends it past Kepa into the far corner.

Chelsea get things going once more.

45+2 mins: Pulisic! James’s cross is missed by Giroud but Pulisic meets it at the far post and manages to miss when it looked easier to score.

43 mins: England’s No1? David Martin saves from Kovacic, Giroud and Pedro one after the other – suspect a Giroud goal could have been ruled out for offside.

35 mins: A long break in play here as Ogbonna is treated, Pellegrini using the time to berate his midfielders. They’re doing well at the back but struggling to get out on a regular basis.

24 mins: So close for the Hammers! Snodgrass whips in a dangerous ball from the right and Antonio drives through and meets it with a diving header, fine stop from Kepa to keep it at 0-0. That’ll give the visitors a shot in the arm.

21 mins: Some neat play from Mount and Pulisic on down the left sees the American win a corner after his effort is put behind at the near post. Chelsea slowly getting closer.

16 mins: After an encouraging start by the Hammers, Chelsea are starting to tighten their grip a little. Pulisic cuts inside and slides an inviting ball in towards Pedro, who comes up just short allowing Martin to collect.