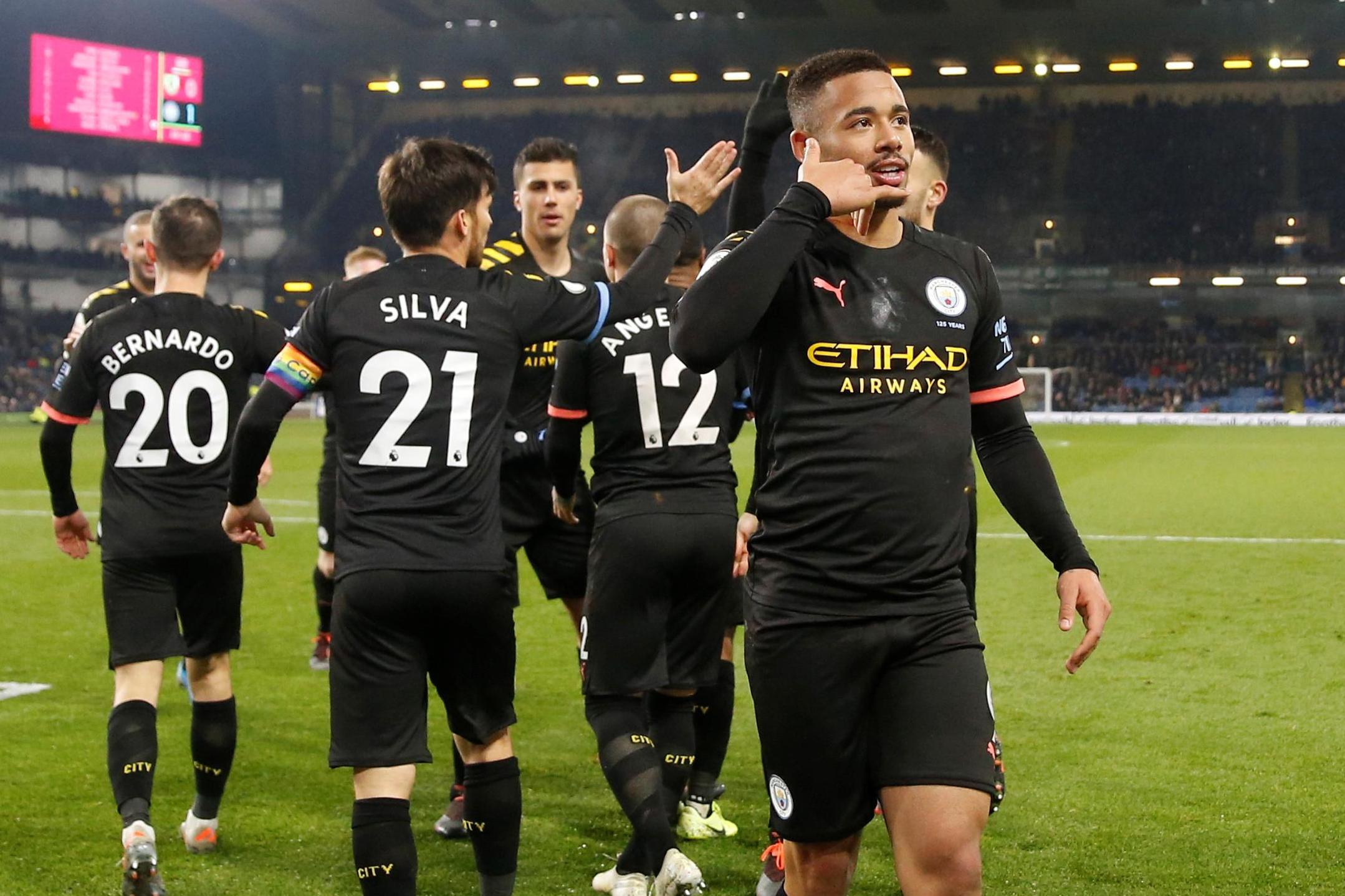 Gabriel Jesus brought his eight-game goal drought to an end in emphatic fashion to help Manchester City return to winning ways with a 4-1 triumph over Burnley at Turf Moor.

The Brazilian’s expertly-taken double, along with a thunderbolt from Rodri and a late Riyad Mahrez strike, saw the defending champions go second in the Premier League and close the gap – temporarily at least – on runaway leaders Liverpool to eight points.

Guardiola made four changes to the side that had drawn at Newcastle on Saturday, holding true to his vow to stick with Fernandinho at centre-half, but bringing in Nicolas Otamendi and Angelino either side of him, while Rodri replaced the suspended Ilkay Gundogan and Bernardo Silva was preferred to Riyad Mahrrez.

Sean Dyche, meanwhile, opted to go with Chris Wood as a lone front man, while handing Danny Drinkwater his first Premier League start for the club, and first for anyone since March 2018.

Even before opening the scoring, Jesus had the ball in the net with a wonderful improvised backheel to turn Angelino’s volley beyond Nick Pope, but he was rightly denied by the offside flag.

When the real thing came on 24 minutes, it was even better, finishing a superb City break with a stunning curled effort into the far corner that left Pope no chance, after Phil Bardsley had stood off.

Kevin de Bruyne had been clattered in the build-up, putting a concerned dampener on the celebrations, but he was soon back on his feet and back running the show, as he would all night, tormenting the hosts with his driving runs from deep and incision from that familiar right-hand position.

From the Belgian’s low cross, Raheem Sterling thought he’d made it two, only to be denied by a terrific point-blank save from Pope, before the England stopper also used his feet to keep out Bernardo Silva at the end of another lightning City counter.

Guardiola would have been pleased with his side’s first half display, but some breathing space on the scoreboard was still needed, and just five minutes after the interval Jesus provided it with another clinical finish, volleying into the top corner from Bernardo’s cross after more patient City build-up.

Jesus almost sealed the match ball moments later, curling past the far post after brilliantly turning James Tarkowski, but the points were made safe on 68 minutes, when Rodri capped an outstanding display with a rocket of a half-volley that left Pope no chance.

The job done, Guardiola took the opportunity to withdraw Sterling and ensure he would not pick up the booking that would incur a suspension for Saturday’s Manchester derby, a game which City will go into with some of their mojo rediscovered, and their centre forward back in form.

Substitute Mahrez continued a fine week that has already seen him named in the top ten of this year’s Ballon d’Or voting by adding City’s fourth with a low right-footed strike, before Robbie Brady gave the home fans something to cheer with a late consolation.