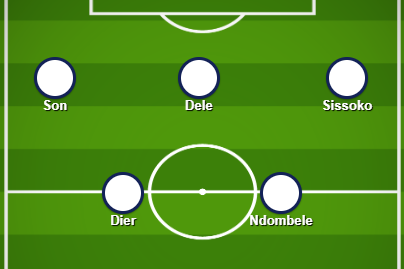 The big question for Tottenham manager Jose Mourinho is who to pick as his midfield two against Burnley after a loose and imbalanced effort by Harry Winks and Moussa Sissoko in the 2-1 defeat to Manchester United.

Mourinho has since said that he does not view Sissoko as a holding midfielder  but was forced to play him there because Eric Dier and Tanguy Ndombele were not in a condition to start.

The pair can, however, expect to return to the side against the Clarets, while Sissoko may replace Lucas Moura in front three. His physicality is likely to be an asset against Sean Dyche’s side, a consideration which could count against Winks.

Dele Alli, with four goals in the four games since Mourinho’s arrival, will keep his place, with Christian Eriksen getting used to life as a substitute.

There are few other options for the Spurs manager, who will likely want to stick with Jan Vertonghen at left-back to counter the threat of Burnley’s old-fashioned front two.

Vote in our poll above.