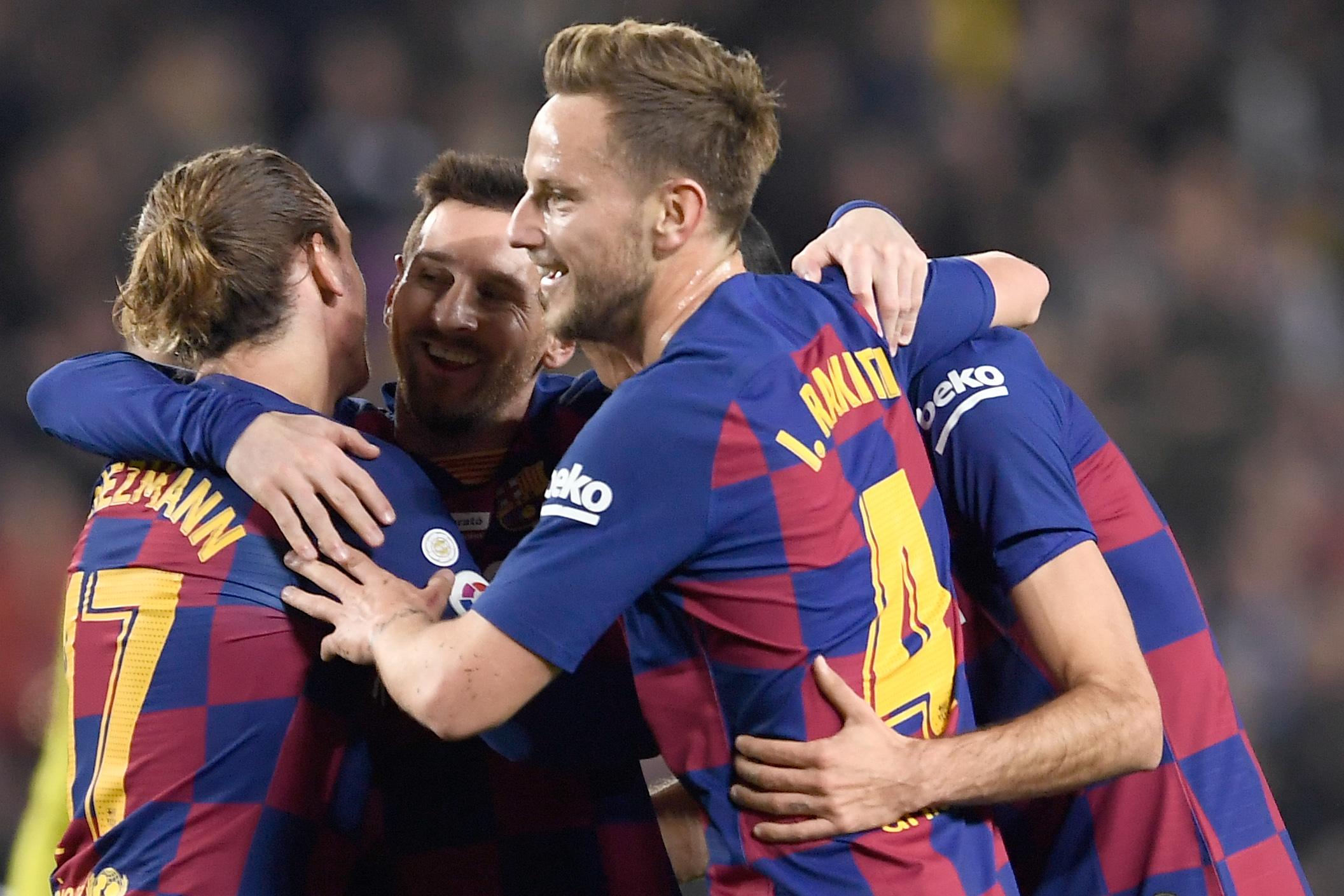 This one was never in doubt. Barcelona beat Mallorca 5-2 at Camp Nou on Saturday night to return to the top of La Liga and make it five wins in a row in all competitions.

Since losing to 2-1 at Levante on November 2 and drawing at home to Slavia Prague in the Champions League three days later, the Blaugrana have defeated Celta Vigo, Leganes, Borussia Dortmund, Atletico Madrid and now Mallorca.

This win arrived thanks to an Antoine Griezmann opener, a superb hat-trick by Lionel Messi and a special strike from Luis Suarez. More about that later.

It was Barca’s third of the season by a 5-2 scoreline, having also secured that same result in the home games against Valencia and Real Betis. The Camp Nou remains a fortress, despite some struggles on the road – and performances have started to improve along with results over the past couple of weeks.

Done anything exciting this week? Lionel Messi has. The Argentine struck a wonderful winner to seal victory for Barcelona at Atletico Madrid last Sunday. On Monday, he flew to Paris to receive his sixth Ballon d’Or. On Tuesday, he was applauded by his team-mates in training.

On Friday, he won La Liga’s Player of the Month award for November. And on Saturday, he hit a brilliant hat-trick after showing off his latest Golden Ball with his three sons on the pitch at Camp Nou. Not bad.

Holding up the Ballon d’Or with his three sons present will have meant a lot. But with his family watching on, there was a special show to follow as well. There usually is, but this one was even better than average: two stunning strikes from outside the area and a third which was rocketed into the top corner which Mallorca goalkeeper Manolo Reina had looked to be covering.

A tremendous treble to round off a spectacular seven days.

“It was a great celebration for the Ballon d’Or,” coach Ernesto Valverde said afterwards. “It’s a demonstration of why they give him the Ballon d’Or.” And he added, with incredible understatement: “It’s difficult to do that every day. And we’re speaking about the same things every day. He doesn’t stop.”

Was Luis Suarez’s back-heel his best ever goal?

While Messi hit a hat-trick and all three were superb strikes, the goal of the night belonged not to Leo, but to Luis Suarez. And the Uruguayan’s brilliant back-heel before half-time, which followed an excellent team move, might just be the finest goal of his career.

“I knew that I didn’t have much of an angle,” Suarez told Movistar after the match. “The only option I had was to try and connect as strongly as possible with my heel to try and limit the goalkeeper’s chances of saving it. It’s one of the best goals of my career.”

The Uruguayan had his back to goal and not only generated power by bringing down his right foot onto the ball, but also kicked it into the turf to lift it above goalkeeper Manolo Reina’s right arm en route to the corner and it even curled a little as well. Simply stunning.

After starting only one of Barcelona’s first 17 matches this season, Ivan Rakitic has been restored to the XI in the last three games and his inclusion in the side has coincided with the Catalans’ best moment of the campaign so far.

Rakitic confidently predicted in the summer that Frenkie de Jong had not come to fill his role. “My place is occupied,” he said. And his place has been occupied ever since, but not by him. Later, he said he felt like his daughter when her toys are taken away and added recently that he did not understand his situation.

His return to the side has been more steady than spectacular, but he brings balance and tactical intelligence to the midfield and Sergio Busquets is able to play his more natural game when Rakitic is alongside him.

“I’m trying to repay the coach’s trust,” he said afterwards. “I’m going to work hard every day. These last few months have not been easy, but I wanted to work and gain confidence. In the last few weeks I have shown I have a lot to give.”

De Jong is improving with every game

While Rakitic faces a fight to prove he should be back as a starter for Barcelona, there is one position in the midfield which is definitely occupied – that of Frenkie de Jong.

The Dutch midfielder has added pace and dynamism to Barca’s midfield this season and he is the box-to-box player the Catalans needed, Against Mallorca, he produced another top performance, assisting Suarez for the fourth goal, setting up Griezmann for a chance he should have buried and tracking back to help out with the defensive duties.

“I like his attitude,” Valverde said afterwards. “The way he brings the ball out from the back, his ability to win it back.”

De Jong can do everything and has boundless energy. Best of all for Barca, he is just getting started.

When Barcelona kicked off their La Liga campaign away to Athletic Club at San Mames on August 16, Carles Alena was in the starting line-up. But after an indifferent first half, he was hauled off and apart from featuring in a friendly fixture against Segunda B side Cartagena last month, he has not been seen since.

Left out altogether, cut from matchday squads on the day of the game or just left on the bench, Alena has been harshly treated and may yet leave on loan in the January transfer window, with Getafe interested in taking the midfielder on a short-term deal.

But he finally received some playing time on Saturday night, replacing Rakitic in the second half and spending just over 20 minutes on the pitch as Barca beat Mallorca – 114 days after his last appearance in an official game for the club.

“It has been hard for me,” he said afterwards. “I have tried to approach the situation as a professional and work twice as hard to be back.” And asked about a possible move, he replied: “I’m not thinking about any team at the moment. We’ll see.”

Premier League: six summer signings who are struggling to fit in...