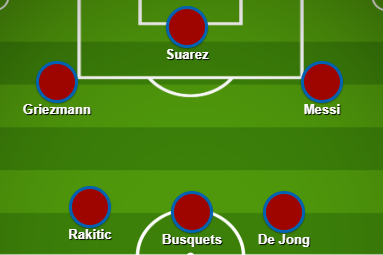 Lionel Messi will be back for Barcelona away to Real Sociedad in La Liga on Saturday as Antoine Griezmann returns to his former club.

With Barca already assured of top spot in Group F, Messi was left out of Barca’s squad for Tuesday’s Champions League clash away to Inter Milan.Youngsters Carles Perez and Ansu Fati were on target in the 2-1 win at San Siro, but the La Masia graduates are expected to be on the bench on Saturday as Messi returns to the XI.

Ousmane Dembele is still sidelined, so the Argentine attacker should be joined by Luis Suarez (who was a substitute in Milan) and Griezmann at Anoeta.

The French forward spent the first five seasons of his professional career at Real Sociedad, scoring 53 goals in 202 appearances before moving to Atletico Madrid in 2014.

Elsewhere, Jordi Alba and Nelson Semedo are unlikely to start after injury, but the two could be involved in the Clasico clash at home to Real Madrid on Wednesday.

Sergio Busquets will return to the XI after he was left on the bench in Milan to avoid a possible suspension for the last 16, while Ivan Rakitic is set to keep his place after coming in and doing well in Barcelona’s last four matches.