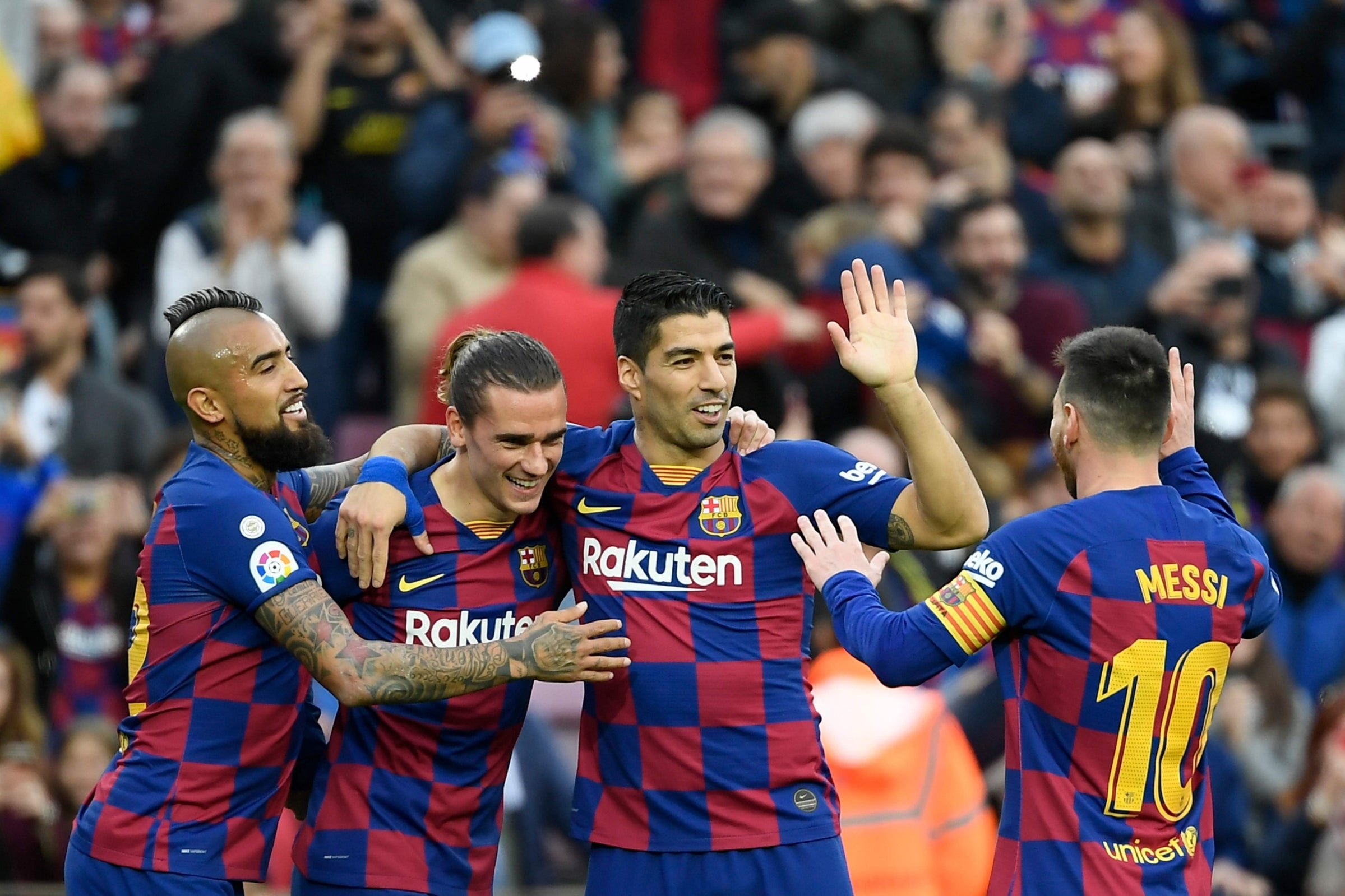 Barcelona put the disappointment and the negativity of Wednesday’s 0-0 draw against Real Madrid behind them with a comfortable 4-1 win at home to Alaves on Saturday afternoon.

Antoine Griezmann, Arturo Vidal, Lionel Messi and Luis Suarez scored the goals to hand victory to the Spanish champions in their final fixture of 2019.

Pere Pons pulled a goal back early in the second half to give Alaves hope of a comeback at 2-1, but the Argentine quashed those hopes with a special strike soon afterwards.

The result sees Barca move three points clear of Real Madrid at the top of the table after 18 games, with Los Blancos in action at home to Athletic Club on Sunday night.

Barcelona have finished the year unbeaten at Camp Nou for the first time since 2011, winning 24 of their 28 fixtures at home and drawing the other four.

And unless Real Madrid beat Athletic Club by six clear goals at the Santiago Bernabeu on Sunday, the Catalans will also end a tough 2019 as winter champions in La Liga.

That might mean little at this point, but for all their problems, the Blaugrana head into the New Year in pole position in the league, albeit only on goal difference if Los Blancos win on Sunday.

Asked what he wanted from 2020, Valverde said: “I want to win all the matches and all the trophies. Then we will all be more relaxed.”

Griezmann has knack of scoring first

“Griezmann opens the can again,” said Barcelona-based newspaper El Mundo Deportivo after the team’s win on Saturday, when the French forward hit his side’s first goal at Camp Nou.

It is becoming a knack. Griezmann now has seven goals for Barca in La Liga and six of them have been his team’s first of the game (against Real Betis, Villarreal, Eibar, Mallorca, Real Sociedad and now Alaves).

The other one was also against Betis and saw the Catalans move 2-1 in front after he had equalised in a fixture which the Spanish champions went on to win 5-2 at Camp Nou.

Griezmann linked up well with both Messi and Suarez on Saturday. “It seems to be more simple for him now,” Valverde said. The Frenchman is adjusting after a tough start and scoring the all-important first goal is not a bad habit to have.

Loan Alena to Getafe? He should be playing

Carles Alena was a surprise starter for Barcelona against Alaves, having also featured from the outset in the 2-1 win over Inter Milan in the Champions League recently.

The midfielder, who was frozen out in August after playing the opening 45 minutes against Athletic Club on the first weekend, gave another assured display and he looks like a Barca player.

Confident and composed in possession, the 21-year-old is adept at carrying the ball forward, has excellent technique and also works hard defensively.

Getafe are interested in taking Alena on loan in January, but Valverde seemed to confirm he would be staying. “When we meet again (after the winter break), both [Alena and Vidal] will be with us,” he told reporters after the game.

Vidal shows his worth

Arturo Vidal will never be the purists’ choice at Barcelona, but he is popular with the fans at Camp Nou because of his aggression and work rate.

The Chilean was reportedly furious to be left out of the side for the Clasico on Wednesday and has recently threatened to leave if he is not playing for the Catalan club.

He scored a fine goal on Wednesday and was a constant threat in the Alaves area. In the right game, against teams defending deep and in numbers, he can be a real asset.

“He’s our player, he scored a goal and I’m not thinking he could leave,” Valverde said. And that should be that.

Barcelona’s win was emphatic in the end, but after Alaves pulled a goal back 11 minutes into the second half, there were some nervy moments for the Blaugrana as the Basques threatened to score a second.

Enough, Messi seemed to say. The Argentine attacker waltzed through a crowd of rival players after 69 minutes and unleased an unstoppable shot from outside the area which gave Fernando Pacheco no chance. Game over.

It was an extraordinary goal, but for Messi, an ordinary one. And it killed off the hopes of Alaves because at 3-1, there was no way back for the visitors. He also gave Suarez the ball for the Uruguayan, who finished with three assists, to make it 4-1.

Messi had been presented with La Liga’s Player of the Month award for November by former team-mates Carles Puyol before kick-off and is now top scorer in the competition with 13 goals, despite having missed the start of the season through injury.