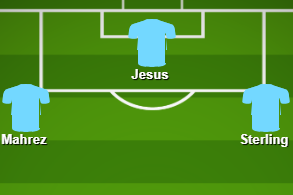 A brace by Raheem Sterling ensured Carabao Cup holders Manchester City remain on course to win the competition for a third consecutive year after a 3-1 victory over Oxford sent them through to the semi-finals.

Matty Taylor cancelled out Joao Cancelo’s first-half opener 21 seconds into the second period, but that was as good as it would get for Karl Robinson’s side against Pep Guardiola’s men.

The Spaniard had shown the hosts plenty of respect with his team selection and despite a few scary moments, saw his players come through unscathed.

Relive all the action with Standard Sport’s LIVE blog.

Sergio Aguero is set to hand Manchester City a boost by returning over the Christmas period.

The Argentina international has been out for nearly a month with a thigh strain, but is ready to step up training as he reaches the final stages of his recovery.

Tonight’s Carabao Cup quarter-final against Oxford is likely to come too soon for the striker, while David Silva is also out following a knock sustained in the derby defeat to Manchester United.

“Aguero is coming back. He did a big part of the training. The next step is to take part in the training session with the team.

“David is not ready. We will see after that on Thursday or Friday whether he can train for Leicester, we will see.”

Leroy Sane has also stepped up his recovery from knee ligament damage, but Guardiola could not give a time frame for the German winger’s return.

“It’s the next step to get to the pitch and the next round will be to start training with us and be part of the training session,” he said.

“A full training session is incredibly good news for him and for all of us. This is good.”

How will Manchester City line up?

Here’s how we have it…

Arsenal are finalising their plans to appoint Mikel Arteta as their new head coach on a three-and-a-half year contract.

The 37-year-old Spaniard has held extensive negotiations with senior club officials in the past 72 hours and he could be in place for Saturday’s game against Everton at Goodison Park.

The Manchester City No2 is due to be in the dugout for their Carabao Cup quarter-final at Oxford tonight and his return to Arsenal is expected to be finalised by the weekend. Arteta has concluded talks with ­Gunners director Josh Kroenke, the son of owner Stan Kroenke, who is now thought to be back in the US.

It would now take a drastic U-turn for Arteta (right) not be appointed to succeed compatriot Unai Emery. He wants the job and is prepared to leave his City role to return to the club for whom he made 149 appearances between 2011-16.

City are unhappy with Arsenal’s approach for Arteta, but they will not stand in his way should an agreement be reached for him. Pep Guardiola said yesterday he is hoping for a quick ­decision on his assistant’s future.

It’s a youthful centre-back pairing for Pep Guardiola tonight with Eric Garcia and Taylor Harwood-Bellis at the heart of defence.

There is a second start in four days for Phil Foden with Raheem Sterling wearing the captain’s armband, starting through the middle it looks like with no recognised centre forward on the pitch.

Gabriel Jesus is among the subs.

Arteta in the house

Is his mind elsewhere? Widespread reports claim he has agreed to take over at former club Arsenal.

The weather isn’t looking too nice at all at the Kassam Stadium but the crowd are in good spirits as kick-off approaches.

A big night for Oxford United. If they can beat the holders tonight, it would be one of their greatest-ever victories.

A minute’s silence for the late and great Jim Smith, who died last week at the age of 79.

A fondly-remembered football man and a lovely tribute from the fans and players.

We’re underway at the Kassam Stadium.

3 mins: As expected it’s been a fast start from the Premier League champions who are knocking it about nicely in midfield with Sterling looking keen in these early moments.

6 mins: City win a free-kick about 30 yards out and it’s Sterling who decides to take it. He takes a 10-yard run-up but the strike is poor and it sails into the stands.

9 mins: Sterling’s runs in behind are causing Oxford problems but Moore deals with the danger superbly and wins a free-kick in the process.

13 mins: The crowd are getting behind Oxford every time they burst into City’s half but so far every attack has broken down.

17 mins: Mahrez is found at the far post by Bernardo and he’s trying to pick out Sterling with a low cross, but it’s a fine intervention from Gorrin to clear for a corner.

A brilliant passing move from City with one-touch passes from their own goal is finished off by Cancelo, who’s deflected strike beats the helpless goalkeeper Archer.

26 mins: City are looking to put the game beyond doubt but the whistle blows against Mahrez for offside.

28 mins: This game is starting to become a one-sided contest as Bernardo comes down the left and is cross nearly finds Sterling, but the block from Dickie proves to be vital and Oxford clear.

Guardiola showed last season he has no qualms deploying his big names against lower-league opposition – we expect more of the same this time around.