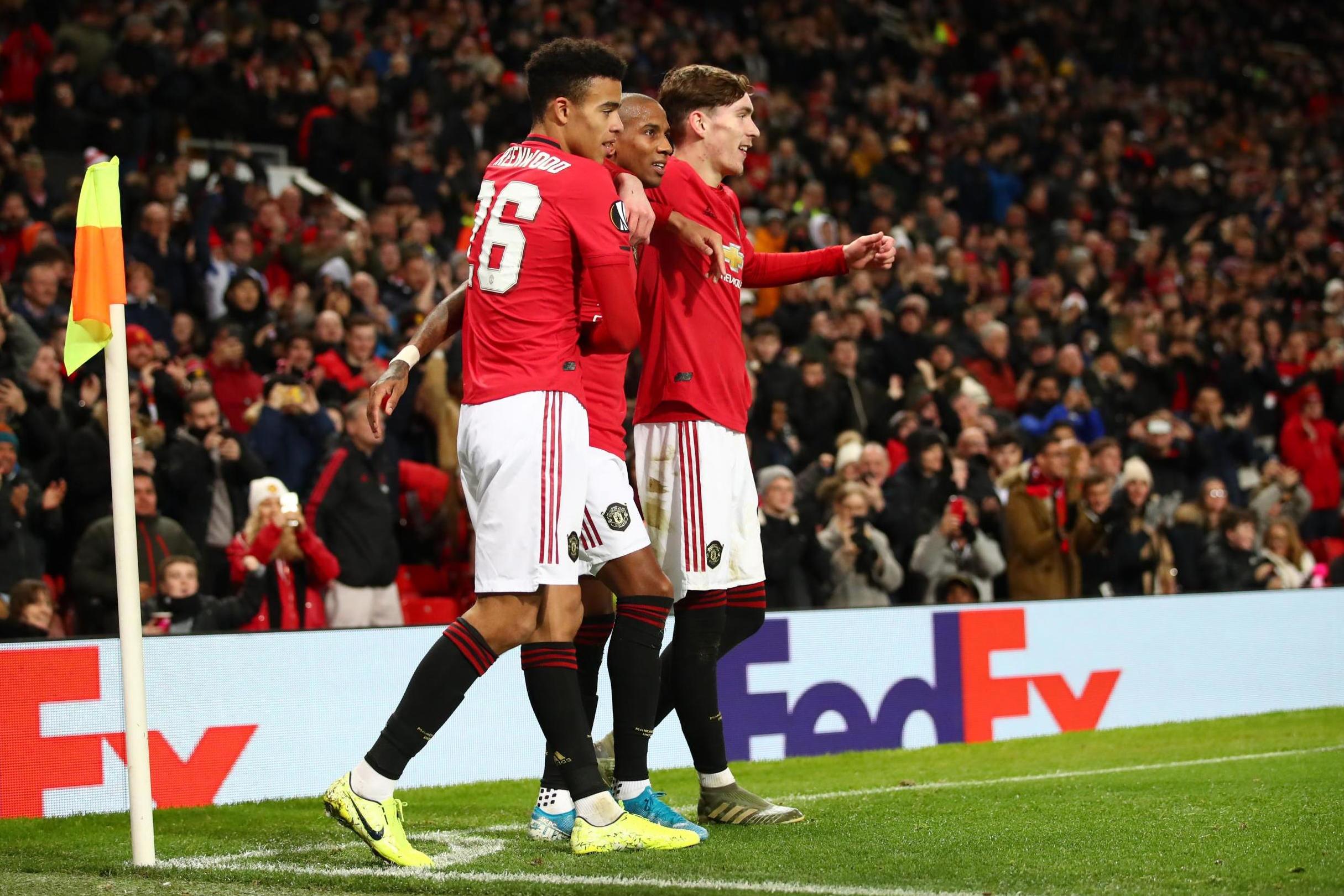 Manchester United rounded off their Europa League group-stage with a 4-0 win over AZ Alkmaar tonight to finish top of Group L.

The Europa League has offered Ole Gunnar Solskjaer respite in what was a tough start to the season, though United are on the up now after wins against Tottenham and Manchester City last week to revitalise their Premier League top-four hopes.

With qualification for the Europa knockout stages already secured after matchday 4, Solskjaer took a young squad to Astana – and the Red Devils were taught a lesson as they let a lead slip to fall 2-1 in Kazhakstan.

United knew they would finish top of the group as long as they avoided defeat to Alkmaar at Old Trafford, and a brilliant second-half performance decided things.

The first half ended goalless as a much-changed United struggled for inspiration, but the hosts soon raced into a four-goal lead thanks to goals from Mason Greenwood (two), Ashley Young and Juan Mata.

Hello and welcome to our LIVE match coverage of Manchester United vs AZ Alkmaar LIVE at Old Trafford!

Ole Gunnar Solskjaer is expected to rotate his squad again tonight as Manchester United gear up for the top of the group clash against AZ Alkmaar at Old Trafford.

The youngest-ever United side to play a European game lost 2-1 to Astana in Kazakhstan last time out but with qualification already wrapped up, there was no danger of going out.

United only require a draw against AZ to top the group, something they achieved when the two sides met in Den Haag back in October. The Dutch side, however, will clinch top spot with a win.

And as there’s still something to play for, it should be an intriguing contest as the Red Devils prepare for their final Europa League group match.

Jesse Lingard is set to be sidelined for the hosts after missing training with a knock sustained during the Manchester derby.

Paul Pogba is still out, along with Eric Bailly and Timothy Fosu-Mensah as they continue their recovery from long-term problems.

The match is also likely to come too soon for full-back Diogo Dalot, with the Portuguese building match fitness.

How we expect to Man Utd to line up

Marcos Rojo and Nemanja Matic are in contention to return for Manchester United’s Europa League clash with AZ Alkmaar.

The pair are both back in training following injuries and are likely to be part of a much-changed line-up from Ole Gunnar Solskjaer.

Manchester United face a straight shootout against AZ Alkmaar on Thursday evening as they aim to top their Europa League group and swerve a possible meeting with Ajax or Inter Milan.

The Red Devils sit top of Group L ahead of the Dutch outfit and know they will progress as group winners if they avoid defeat at Old Trafford.

AZ Alkmaar, who held United to a goalless draw at the AFAS Stadion in October, must win to leapfrog their hosts, but are already assured of their place in the last 32 regardless.

Ole Gunnar Solskjaer will be keen to avoid the top-seeded Champions League dropouts, with last year’s semi-finalists Ajax among a quartet of possible opponents if United finish second in their group.

If Solskjaer’s men avoid defeat and win their group, Bayer Leverkusen, Shakhtar Donestsk, Olympiacos and Club Brugge are among the toughest possible opponents in the round of 32.​

Solskjaer: We’re on the right track

Manchester United boss Ole Gunnar Solskjaer believes his side are finally on the right track in terms of results after coming through a difficult period at the club.

“Inside we’ve always had belief what we’re doing is the right thing,” he said.

“Might change the perception outside, but you can’t control that, could’ve been two draws, 4-0 wins, that’s the nature, sometimes you’ve got the margins and the decision sending a young team to Astana made the players stayed here have more energy and be really ready for a hard week.

“Results are the proof in the end, but inside we’ve always believed what we’re doing, it’s ups and downs, but we are on the right track.

“I see these boys every single day in training with the attitude, skills and quality they’ve got, I’m not worried.

“Consistency is vital if you’re going to win trophies and this young team need to learn. It doesn’t happen that you feel great every time you walk onto the pitch.

“We’ve had some games where we’ve not been able to perform as we’d like and that’s a learning curve.

“The young boys will improve that in the coming years and rest of the season. We’ve come through a sticky patch and looking brighter now.”

It’s only 13 days until the festive period and there’s no doubt Solskjaer would love a win tonight as an early present.

Team news will be arriving shortly, so stay tuned!

Manchester United boss Ole Gunnar Solskjaer has made NINE changes from the side that won in the Manchester derby on Sunday.

Harry Maguire and Anthony Martial are the only players to keep their places as the Norwegian gives chances to a number of fringe players.

Ashley Young captains the side from right-back while James Garner lines up alongside Nemanja Matic in the central midfield two.

Mason Greenwood leads the line having scored against Astana and Partizan earlier in the group stage.

Manchester United have scored two goals or more in their last four home matches, having only struck once in each of their previous six home games.

And in the Europa League, the Red Devils are unbeaten in their last 11 home games (W9 D2), registering five wins out of five at Old Trafford in the group stage including the two this season against Astana (1-0) and Partizan (3-0).

They were on a run of 14 matches in the competition without defeat – four shy of the all-time record set last season by domestic rivals Chelsea – until their Matchday 5 reverse in Kazakhstan.

If they extend their unbeaten run tonight, they will top Group L.

Manchester United have only lost once at home this season – a 2-1 defeat to Crystal Palace – and that will give Solskjaer’s side the confidence to get over the line tonight.

But they will need to be wary, given that AZ are particularly handy on the road having won four in a row without conceding, scoring 15 goals in the process. Indeed, they haven’t lost away since a 2-1 loss at Vitesse in September.

So, we already know Manchester United are through. But what’s at stake tonight?

Solskjaer’s men will advance as group winners if they draw or win tonight.

If AZ manage to take a win back to the Netherlands, they will leapfrog United. With some difficult teams dropping down from the Champions League – namely Ajax, Inter and Shahkhtar – that could be crucial in forming their opponents for the last-32.

Nemanja Matic knows he’s got a point to prove tonight.

The Serbian midfielder has barely featured under Solskjaer this season and makes his first start since the reverse of this fixture on October 3.

United will do well to keep an eye on Calvin Stengs tonight.

The 20-year-old has scored nine goals and registered 11 assists in 27 appearances this season. He is the main creator the Dutch side and will be given a main role tonight, especially with Myron Boadu suspended.

It’s packed at Old Trafford tonight. Regardless of what you think about United’s fall from the top of the English game, they can still attract huge crowds – even on a Thursday night when they’ve already qualified.

A club with gigantic support.

And we’re off at Old Trafford.

Can confirm that Jordy Clasie, the former Southampton *midfielder* who stands at 5’7, is playing at centre-back tonight for AZ.

3 mins: A steady start from United, who are being pushed back into their defensive third by a high-pressing AZ side.

Indeed, the Dutch side are already on target with a shot from Sugawara, but it’s held by Romero.

With qualification already secured, Solskjaer has the luxury of being able to focus on Sunday’s game against Everton.

We may earn commission from some of the links in this article, but we never allow this to bias our coverage.​