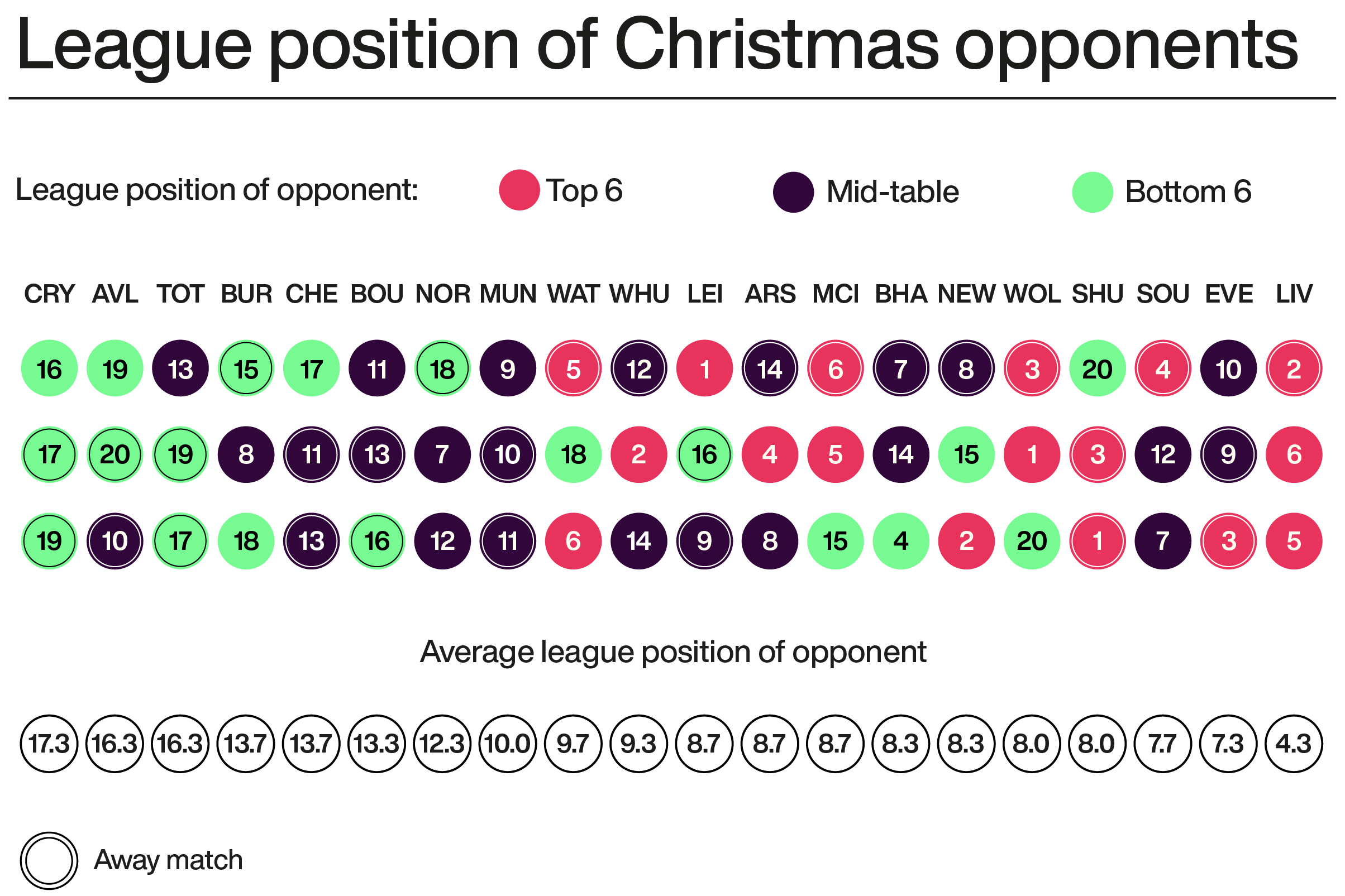 Being a Fantasy Premier League manager at Christmas is hard, so why not make it a lot easier on yourself by picking players with the ‘easiest’ run of fixtures?

All 20 Premier League sides have a number of games in quick succession after Christmas day, but some teams have got off lighter than others.

So which teams should you be buying from to see you through to 2020?

They might have lost their most recent game, but Roy Hodgson’s Crystal Palace side have the perfect chance to bounce back at the end of the year.

The Eagles have the easiest set of fixtures (according to the average position of their upcoming opponents) with West Ham, Southampton and Norwich all set to take them on.

Between them, those three sides have just two wins from a cumulative nine games, so who should you bring in to make the most of it?

Wilfried Zaha is perhaps the most obvious FPL choice at Palace, having started scoring after a long drought at the start of the season.

The Ivory Coast forward has notched three goals in six games since, and could be well placed to grab a few more after Christmas – at £6.8m he will surely tempt many.

Elsewhere, James Tomkins is one of Palace’s less popular FPL picks at just 0.5% ownership, but has turned a few heads since his return to the team.

Tomkins has accrued 26 points in five games – including an assist – in the festive build-up. If Palace get clean sheets, the 30-year-old will rack up the points.

While Aston Villa are themselves enduring a torrid run of form – winless in five – they have the chance to turn it around with a run of fixtures against beatable opposition.

One player is emerging as the standout FPL candidate at Villa Park, and that man is Jack Grealish.

Grealish looks to be finally fulfilling his potential in the top tier of English football having notched five goals and two assists in his last nine starts – with his ownership (12.7%) still reasonably low, now could be the time to jump aboard before the Grealish bandwagon starts to roll.

Grealish is by far and away the most in-form Villa player, but if you’re looking for someone yet to emerge, Tom Heaton could be worth your consideration.

The goalkeeper has yet to hit the heights of 2014/15 and 2016/17, and with three clean sheets to his name this season hasn’t turned many heads.

But with experience and pedigree in the FPL world, having the £4.5m goalkeeper in your squad might be the wisest investment you make this Christmas. Could the England international come good for Villa?

Nearer the top of the table, Tottenham have endured a mixed run of form lately, but might be able to launch an assault on the top four with a tantalising run of games.

Jose Mourinho’s side face Brighton before taking on Norwich and Southampton, and who would bet against them taking nine points from nine?

Dele Alli will certainly be hoping his improved form continues. The England midfielder has enjoyed something of a personal resurgence under Mourinho, with six attacking returns in the first four league games under the Portuguese.

Dele has scored 41 FPL points since Mourinho’s arrival compared with 22 before that – expect his price (£8.8m) and ownership (14.2%) to rocket if he adds to that before the year is out.

If it’s a differential you’re after however, Moussa Sissoko could be the man for you.

At just £4.9m and 2.3% ownership Sissoko is flying under the radar despite two goals from five consecutive starts.

But if you’re hoping for a massive FPL points payout, Harry Kane is still one of the biggest hitters in the game despite 2019/20 proving stop-start for the England captain.

Kane scored his highest points total of the season (16) against Burnley recently, as well as adding a brace in the Champions League against Olympiacos shortly after Mourinho’s arrival.

Kane has blanked in four of his last five gameweeks, but with favourable fixtures to come, is always capable of scoring heavily in a short space of time.