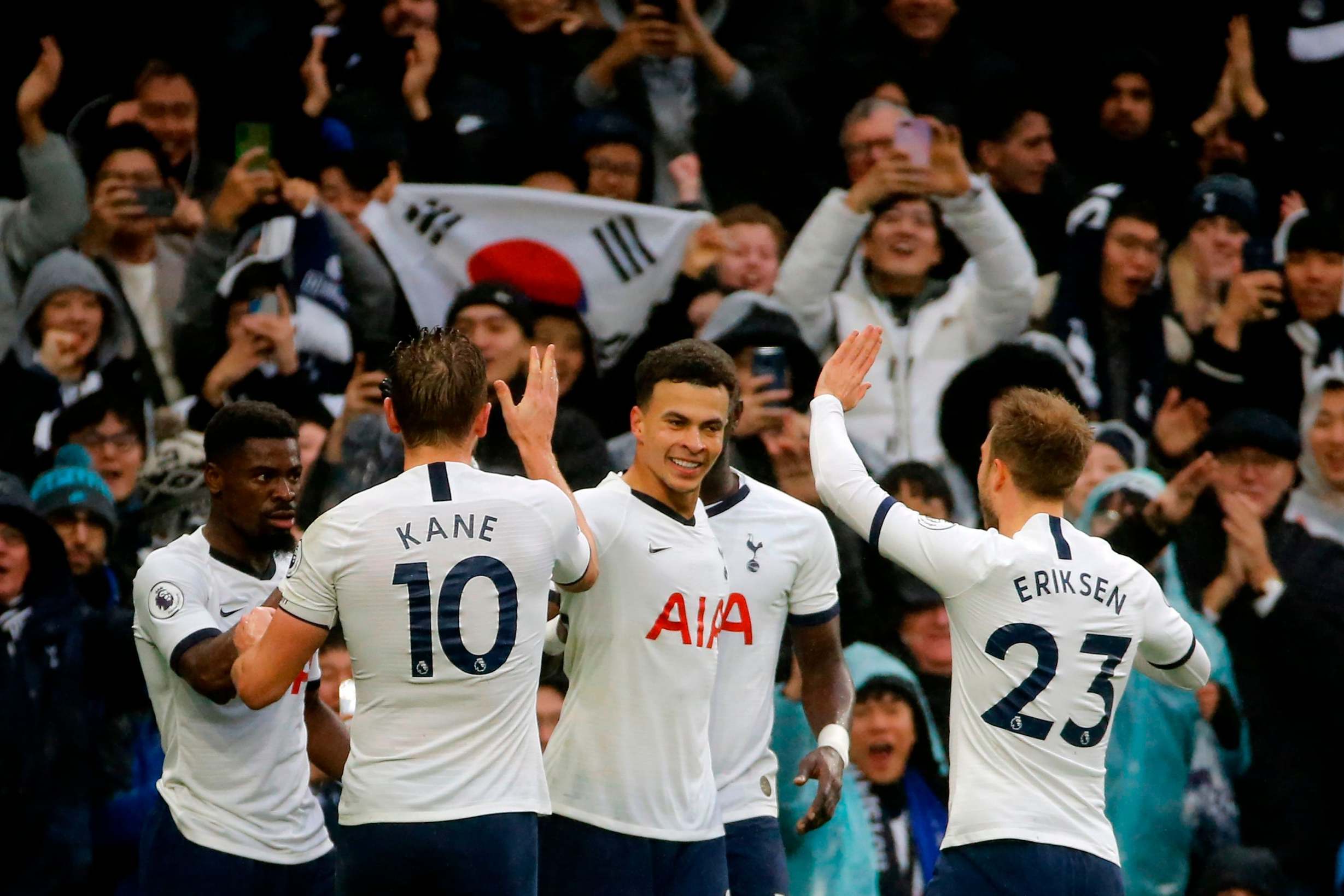 Dele Alli scored a sublime winner as Tottenham responded from the defeat to Chelsea with a Boxing Day win over Brighton, taking them fifth in the Premier League.

Dele’s wonderful dink on 72 minutes completed a second-half turnaround after Harry Kane, who had an opening goal ruled out by the VAR, had cancelled out Adam Webster’s header. Spurs moved to within three points of fourth-placed Chelsea, who host Southampton later on Boxing Day.

Reeling from the 2-0 defeat to their rivals four days ago and with an investigation into alleged racism against Antonio Rudiger still ongoing, Spurs needed a pick-me-up in the first of a relatively kind-looking trio of fixtures against the Seagulls, Norwich and Saints.

Manager Jose Mourinho made two changes from the defeat to his former club, with Harry Winks for Eric Dier in midfield and Ryan Sessegnon replacing the suspended Heung-min Son, who began the first of a three-match ban for kicking out at Rudiger.

It was 19-year-old Sessegnon’s first Premier League start and he nearly made an immediate impression, narrowly failing to connect with Kane’s inviting cross after four minutes, shortly after Steven Alzate had fired wide from 20 yards for the Seagulls.

Sessegnon threatened again, racing beyond Brighton’s back-five and steering Toby Alderweireld’s pass onto the base of the post, albeit with the offside flag raised.

Spurs’ early promise soon dissipated amid familiar problems, including a lack of creativity and bite in a midfield two of Winks and Moussa Sissoko. Tanguy Ndombele, the club’s £65million record-signing, was left out of the 18 altogether.

Having thrashed Spurs 3-0 in October, during the deaththroes of Mauricio Pochettino’s reign, Brighton had nothing to fear and they were happy to allow Spurs possession and try their luck when possible, with Alzate and Aaron Mooy both going close in the opening 21 minutes.

The contest was in need of a touch of finesse and after 24 minutes Winks delivered. In possession on the halfway line, he clipped a perfect pass behind the Brighton defence and Kane raced onto it to steer first-time past Mat Ryan.

It looked a tight offside call against the striker and, sure enough, the VAR ruled Kane to be fractionally ahead of Shane Duffy. It by no means the closest call in the Premier League this season but nonetheless another fractional decision was predictably greeted by boos from the home fans.

Winks has struggled to win over Mourinho and 12 minutes later the England international showed why, going from possible hero to villain. Caught the wrong side of Ezequiel Schelotto, Winks raced back and flew into a challenge on the wing-back, who went down theatrically. If the decision to award a foul was harsh, it was compounded firstly when Winks was booked, ruling him out of the trip to Norwich, and again when Webster rose to head home Pascal Gross’ subsequent free-kick.

The defender was barely challenge as he rose above Toby Alderweireld and found the bottom corner.

Spurs’ ongoing vulnerability from set-pieces was underlined again before the interval, when Bernardo rose to head another Gross ball wide.

Mourinho, who had introduced Christian Eriksen at half-time against Chelsea, resisted the temptation to make changes at the interval but any expectations that Spurs would immediately improve were dampened when Aaron Connolly was left completely unmarked after the restart, only to head Bernardo’s cross wide.

In the end, Spurs’ break was a lucky one. Lucas Moura, who was scatty all afternoon, tried to weave forward but found the way blocked by Webster. The Brighton defender’s tackle ricocheted off teammate Dale Stephens into the path of Kane, who saw his first left-footed effort well-saved by Ryan before finishing the rebound on the volley with his right.

There were no doubts about his 10th League goal of the season, which prompted a collective sign of relief from the Tottenham Hotspur Stadium.

Mourinho immediately responded with the introduction of Giovani Lo Celso for Sessegnon and the Argentine made a difference, adding some much-needed composure and zip to the hosts.

Having got it badly wrong against Chelsea, Mourinho deserves credit for his changes, not least because his second substitute, Christian Eriksen, created the winner. Winks’ came close to a second booking with another reckless slide – resulting in Gross stinging Paulo Gazzaniga’s palms from 20 yards with the resulting free-kick – and was promptly hooked for the Dane.

Within just three minutes, Eriksen’s sublime diagonal found Aurier, who showed good composure to set-up Dele’s superb first-time finish over Ryan. With Sissoko also suspended for trip to Norwich on Saturday, one of Eriksen or Lo Celso will surely make a first League start under Mourinho at Carrow Road.

Mourinho’s next sub was, predictably, Eric Dier but if Spurs hoped to seamlessly see out the match, there were still some sticky moments to come. Webster emphasised the ongoing lack of protection from midfield – a theme of the afternoon – by striding forward and testing Gazzaniga from 25 yards.

Spurs, though, looked more likely to add to their leads, with Dele and Eriksen both going close late on as Graham Potter urged his side forward in the dying minutes.

90 mins: That would have sealed it!

Great pass from Kane, and a brilliant first touch from Alli because he was off balance and the ball just behind him, but he chooses to take it early and Ryan sticks out a hand to push it over the bar.

88 mins: Sensible stuff from Alli, who keeps it in the corner rather than clip into a sparsely populated penalty area, but Spurs soon surrender possession as Dier miscontrols in midfield.

84 mins: Jose Mourinho will be doing his nut here. With Harry Winks already suspended for Norwich, Moussa Sissoko has just gone and picked up a ban of his own –  a fifth yellow of the season for a petulant reaction to Burn’s foul.

82 mins: Not the most convincing bit of work from Gazzaniga, who needs two attempts to hold a Gross effort that is pretty much straight at him, but no harm done.

80 mins: Can Brighton rally then? We’ve barely seen Neal Maupay since he came on, but he only tends to need one chance.

76 mins: Shut up shop time. Eric Dier is on in place of Lucas Moura.

Dan Kilpatrick is at the Tottenham Hotspur Stadium

Spurs have largely been below bar but they lead through a goal of sublime quality by Dele Alli. Substitute Christian Eriksen was the architect, hitting a sweet diagonal to Serge Aurier, who touched it back to Dele. The England midfield finished first-time with a superb, instinctive dink.

Eriksen makes it with a cracking clip for Aurier, who cushions inside delightfully for Alli, who in turn lifts a stunning first-time finish over Mat Ryan. Beauty.

68 mins: And that is Graham Potter’s signal to get his top scorer on. Neal Maupay replaces Aaron Connolly.

Jose Mourinho, perhaps sensing what we all have re: Winks, decides he’s better get him off, and Christian Eriksen is on.

67 mins: Absolutely hammered ‘keeper side by Gross, but it’s pretty much straight at Gazzaniga, and he punches clear.

66 mins: Harry Winks will do well to stay on the pitch, the way he’s flying into some of these challenges, already on a yellow. His latest sees him concede a free-kick right on the edge of the box.

64 mins: This is the best spell of pressure Spurs have managed in the game, and it’s been a lot to do with Lucas Moura, who is buzzing around everywhere, winning the ball back and causing problems.

Dan Kilpatrick is at the Tottenham Hotspur Stadium

Harry Kane’s goal and the introduction of Giovani Lo Celso for Ryan Sessegnon have given the whole stadium a lift and suddenly Spurs look full of life again. Sessegnon did not have many openings after the first ten minutes but he put in a shift down the left flank.

57 mins: Almost a carbon copy! This time Webster’s clearance is charged down by Sissoko and again falls straight to Kane, but there’s more pace on it this time and he can’t keep it under control.

56 mins: After that bright start, Ryan Sessegnon has been pretty quiet, and his afternoon is done. Giovanni Lo Celso is on in his place.

You just can’t keep Harry Kane out of the goals on Boxing Day!

There’s a bitt of good fortune as the ball breaks off Moura after Webster’s clearance and back into the path of Kane. He hammers across goal, but Mat Ryan makes a cracking low save, only for the rebound to be put away by the skipper with an acrobatic finish.

Bernardo floats a lovely ball into the near post where Aaron Connolly has broken free, but he makes an absolute hash of his header. So much of a hash, in fact, that it comes off his shoulder and goes behind.

48 mins: Spurs start the second half with a lengthy spell of possession that breaks down as soon as someone tries an adventurous pass.