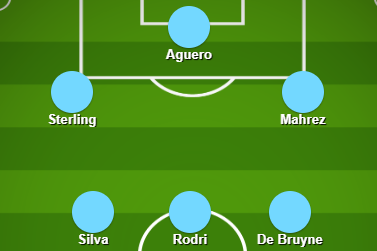 Both players have missed the Premier League champions’ Christmas schedule so far, but Pep Guardiola has confirmed they are in contention to face Carlo Ancelotti’s side at the Etihad.

It is a major boost for Guardiola, who has repeatedly complained about the congested fixture list over the festive season.

More good news is the imminent return of Aymeric Laporte, who has returned to training after serious knee ligament damage.

Guardiola said: “He is getting better. He is training alone, but is already on the pitch and I think it is the last part (of his recovery).

“I think in one week or maybe 10 days be can come back and can start to train with us.”

City’s manager reiterated his concerns about the Christmas schedule, which saw his side play twice in less than 48 hours last week.

“We think about that (injuries),” he said. “We have five games in 12 days so it is quite similar for the other teams, but in this period they have one more day or two more days to recover.

“We take a risk. The same last game. We played 80 minutes with 10 against 11 in a difficult test against Wolves and then after two days come back and play again. It is a risk but you have to take it.”

Guardiola also hailed new Everton manager Ancelotti and backed him to be a success at Goodison.

“Everton is Everton, one of the biggest and traditional and historical teams in England, with incredible quality in these players,” he added. “They struggle a bit for the points this season, but the quality is there and with a new manager with incredible experience.

“A manager like Carlo and with his incredible capacity. Carlo is one of the smartest guys he is always able, it doesn’t matter the team he takes, to make them work, good results in the last two games so difficult test for us.

“We play against him a few times, not much. Always his teams beat our teams.

“He is an incredible gentleman. He managed some of the greatest and more experienced teams in Europe. The list is huge and when that happens it is because you are an incredible manager.

“I think it is incredible news for English football, he is back and I think he can make an incredible job there.”

Predict the gameweek 21 results above!