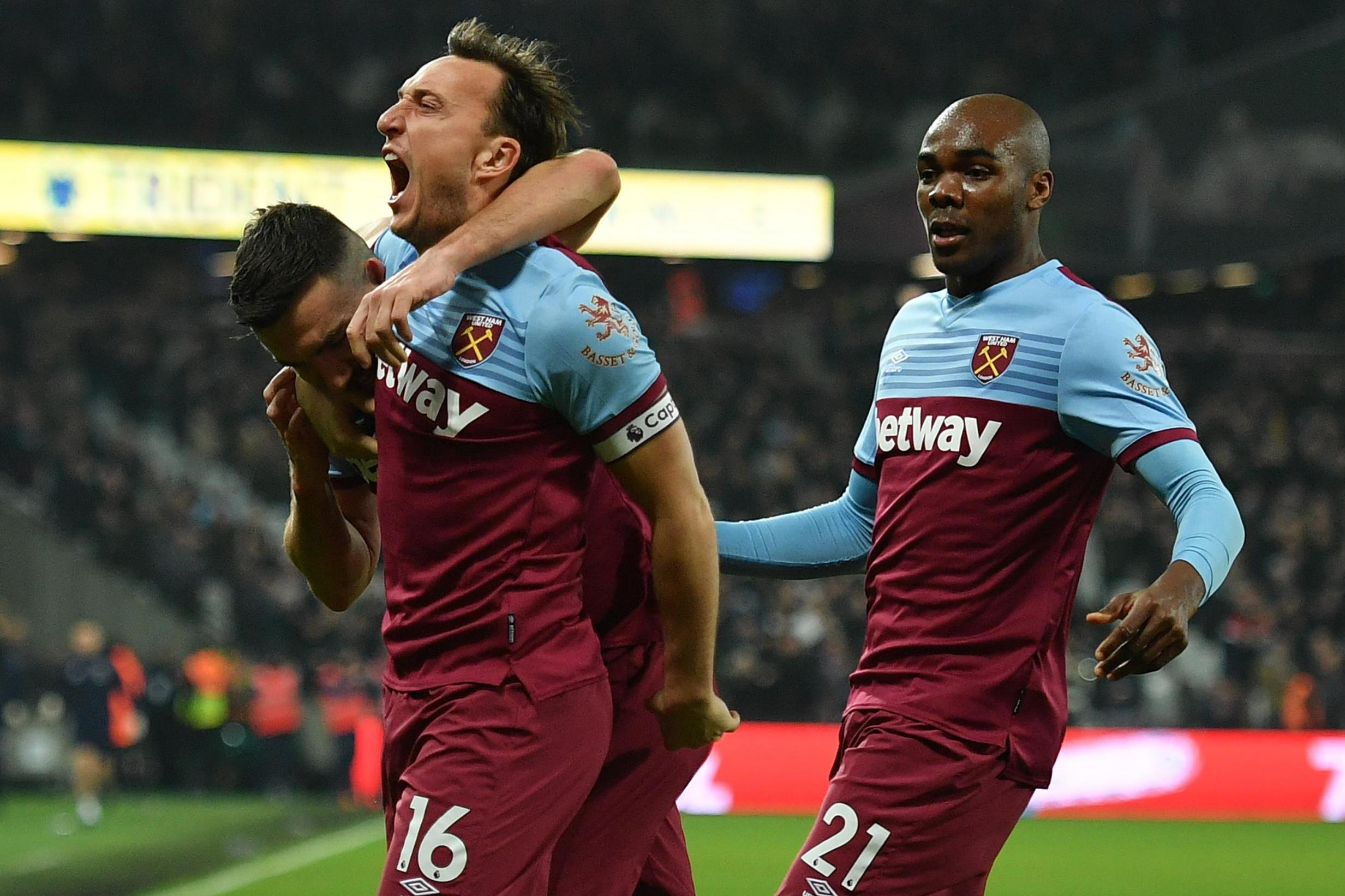 David Moyes made a flying start to his second spell at West Ham as the Hammers crushed Bournemouth to move out of the relegation zone.

Mark Noble scored a brace, Sebastien Haller netted a stunning bicycle kick and Felipe Anderson added a fourth as Moyes made an instant impact on his return to the London Stadium.

“The good times are back,” said the West Ham pitch announcer. “The Moysiah has returned.”

Some fans have criticised the appointment of Moyes as a backwards step but this was the perfect way for the Scot to get the new era at West Ham up and running.

The Hammers had dropped into the bottom three after Aston Villa won earlier in the day but their first victory since Christmas moves them up to 16th.

Bournemouth slip into the relegation zone and there is already a completely different feel around West Ham following the appointment of Moyes.

Captain Noble led by example and West Ham were vastly improved from their poor displays under Manuel Pellegrini.

West Ham fans got a performance full of commitment and the Hammers were even playing “Ole” football by the end.

Moyes said at his unveiling earlier this week that it was time for the players to step up and West Ham never looked back from the moment Noble gave them an early lead.

It took just 17 minutes for the Moyes era to get up and running when Robert Snodgrass picked out Noble on the end of the area and his shot deflected off Lewis Cook and past Aaron Ramsdale.

Haller doubled the lead on 25 minutes with a stunning bicycle kick to challenge Brighton forward Alireza Jahanbakhsh for best goal of the opening weekend of the decade.

It was 3-0 and West Ham were cruising when Noble won and then converted a penalty to leave the Hammers in dreamland before the break.

Anderson scored a brilliant fourth in the second half when he controlled a long diagonal with an exquisite touch before running into the box and slotting home.

Aaron Cresswell had a red card downgraded to a yellow following a challenge on Bournemouth midfielder Ryan Fraser and West Ham ran out comfortable winners.

“Before we can talk about challenging higher up the table, we have a lot of work to do,” said Moyes in his programme notes before the game. This was an ideal start.

“That couldn’t have gone much better for Moyes.

“There has been fair bit of criticism around his appointment this week but that was an ideal way to get the new era at West Ham up and running. There is still plenty of work to do but all of a sudden things look a bit rosier.”

What a day it’s been for David Moyes in his first game in charge. Four goals, a home win for the first time since September and a clean sheet to go with it.

A much-improved performance from the Hammers, while Bournemouth slip to an eighth defeat in 10 games.

90+3 mins: Another chance for the fifth goes begging when Fornals fires up and over the bar from the edge of the box.

90 mins: Masuaku fancies a crack at goal and it’s a good hit, but again Ramsdale does well to pull off the save.

Bournemouth go straight up the other end in search of a consolation but it’s a tame effort from Fraser.

87 mins: Lewis Cook goes into the book for a wild lunge on Masuaku.

Cresswell very nearly rubs more salt into the wound, crossing back to Fornals only to see his effort palmed away by Ramsdale.

Without him, it could have been six or seven today.

82 mins: Snodgrass has put in a big shift today and rightly gets a big ovation from the home supporters.

Arthur Masuaku is the man to replace him, perhaps just to make sure that clean sheet stays in place.

Of all the people to rise to meet a cross, you wouldn’t expect Lanzini to be there. But the Argentinian climbs above Mepham and heads at goal, forcing Ramsdale to make a decent stop.

Giuseppe Muro thinks VAR has got that decision spot on…

“There is no doubt Aaron Cresswell got a foot on the ball and I think that’s the right decision to downgrade the red card to a yellow. Everything is going West Ham’s way this evening.”

Nothing is going Bournemouth’s way today as Wilson gets his head to the cross from Fraser but it bounces back off the woodwork and into Fabianski’s hands.

But wait… it’s been downgraded to a yellow!

Oh dear. It seems a perfect afternoon for the Hammers has been tarnished when Cresswell is shown a straight red card for a challenge on Fraser.

The left-back makes an attempt to win the ball and does get it, but he’s gone in dangerously and caught Fraser’s leg while out of control. But VAR looks at it and recommends a yellow card instead.

72 mins: Callum Wilson tries to work an opening down the right but finds the towering presence of Ogbonna gets in the way to take away possession.

The Hammers have looked much more solid and hard-working at the back today – two pillars of Moyes’ management style.

67 mins: Moyes responds by taking off the goalscorer, with Manuel Lanzini coming on in his place. A round of applause from his manager.

Bournemouth also make a change: Jack Simpson on for Gosling.

He’s finally off the mark! A wonderful cross-field pass from Rice finds the Brazilian and his touch is velvet to take it past Mepham. With only Ramsdale to beat, he slides it underneath and that’s game over.

Giuseppe Muro at the London Stadium

“It’s been a quiet start to the second half but that will suit West Ham fine. Bournemouth haven’t looked like getting back into the game at all. They’ve been so poor today and really they’ve been the ideal opponents for Moyes in his first game in charge.”

62 mins: West Ham are just going through the motions now with that three-goal cushion certainly giving them confidence to knock the ball around in some style.

If Pellegrini’s watching this, he’ll be wondering what took them so long. But it seems by doing the simple things, the Hammers are back on form.

58 mins: Snodgrass rolls Lewis Cook with a sublime turn and wins a free-kick about 30 yards from goal.

Cresswell takes responsibility for the effort but it might be the last time he does that after blazing it far, far over the bar. That wasn’t pretty.

54 mins: It’s all too comfortable for the Hammers at the moment. Even when Bournemouth piece together a good move, the final pass lets them down and it takes them a while to retrieve possession.

50 mins: It’s getting desperate for the away side.

Haller skips past Steve Cook’s challenge and picks out Fornals at the far post, but it’s a superb piece of defending from Lewis Cook to clear at the last moment.

And we’re back at the London Stadium where Moyes is working miracles. Are there more to come?