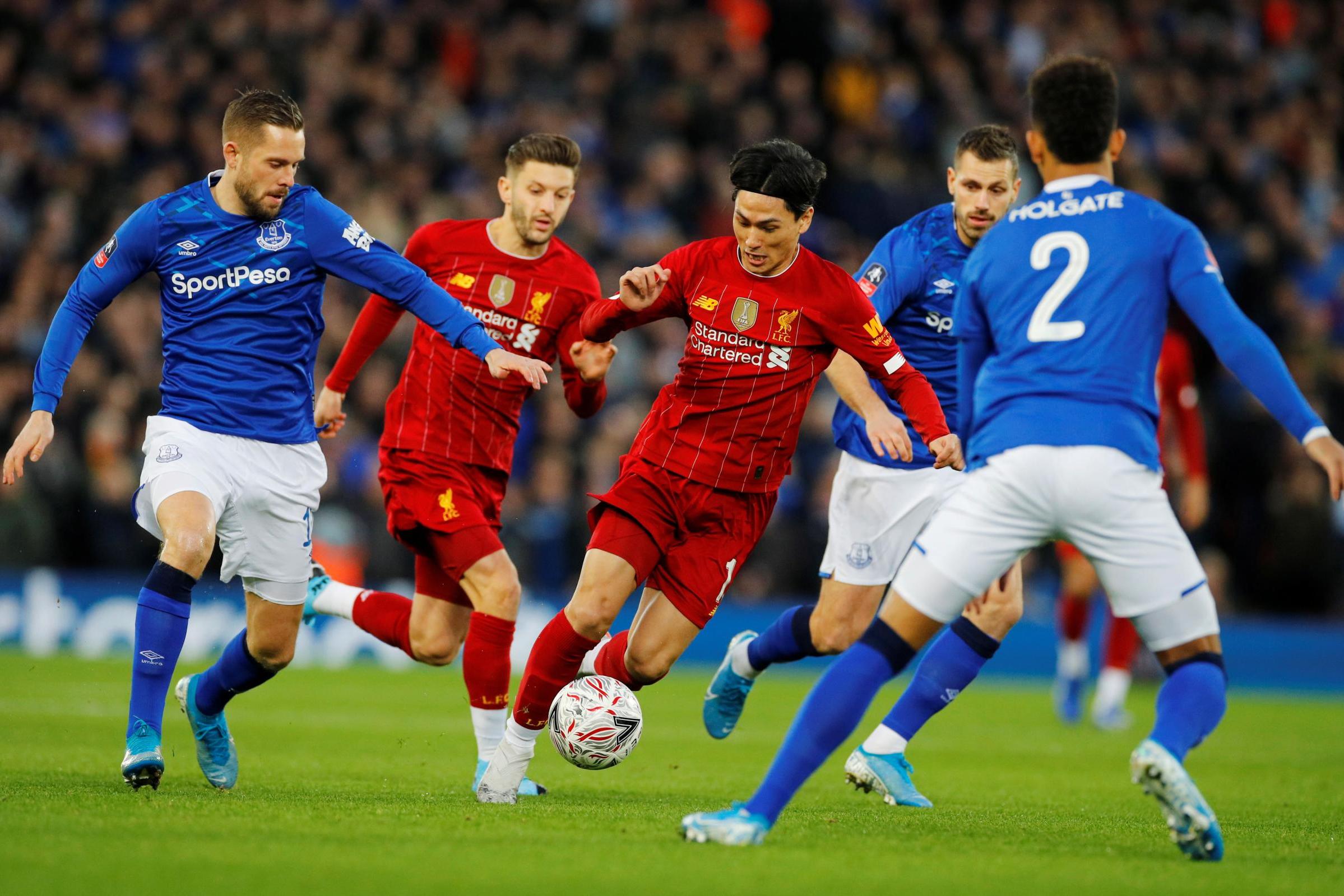 Welcome to the Evening Standard’s LIVE coverage of the FA Cup third round tie between Liverpool and Everton.

Carlo Ancelotti gets his first taste of the Merseyside derby this afternoon as he attempts to halt a Liverpool side in rampant form.

The Italian has two wins and one defeat – that one coming at the Eithad – since arriving at Goodison Park and against what could be a much-changed Liverpool side this afternoon, he could deliver a huge statement.

Today’s match kicks off at 4:01pm GMT, with a 60-second delay coming as part of the FA’s ‘Heads Up’ campaign.

An entertaining Merseyside derby with the visitors having the better chances but Adrian has stood firm. It’s goalless at the break.

45+2 mins: Great chance for Everton to take the lead just before the break but Walcott fluffs his lines in setting up Richarlison.

45 mins: Minamino looks full of energy and chases down Mina, but Pickford is off his line to grab the ball.

Two minutes of added time will be played.

My word… what a stop from the goalkeeper!

Origi, who looked offside, gets the shot away from inside the area and he’s squeezed it through Mina’s legs. But out of nowhere, Pickford stretches out a glove and gets a fingertip on it.

38 mins: Ancelotti has got Everton playing some lovely stuff and it’s a brilliant move. Sigurdsson into the feet of Walcott, who lays it off to Calvert-Lewin and the striker drags his shot wide.

Sidibe screams at his team-mate after finding himself in acres of space.

36 mins: A poor clearance from Adrian puts Liverpool in a spot of bother and it’s another dangerous cross from Walcott, and Lallana nearly diverts it into his own net!

He’s starting to make an impact now, isn’t he? Origi whips in a peach of a cross and Minamino glances wide of the far post.

This is end-to-end stuff and it’s very enjoyable to watch.

30 mins: Brilliant play from Everton out from the back and it’s a sumptuous cross from Walcott.

Calvert-Lewin busts a gut to get there but mistimes the flight and heads wide!

28 mins: Elliott is getting more involved with every minute and this time he sets up Lallana, who fires wide on his left foot.

Lovely work down the right from Walcott, who cuts back the cross and Richarlison anticipates it before striking low and hard, but Adrian’s legs make the save.

25 mins: Neco Williams has certainly shown he’s not daunted by the occasion so far and the young full-back strikes wide from the edge of the box.

An even contest here.

22 mins: Elliott is showing flashes of his ability down the right and it’s so easy to forget he’s just 16 years of age. He’s playing with a lot of confidence and causing problems for Digne.

“A ridiculously frenetic start to proceedings at Anfield and Everton have had the best of it.

“The visitors have gone close through both Calvert-Lewin and Holgate – who really should have scored – and they certainly don’t seem to be carrying on of the baggage associated with their long wait for a win here.”

20 mins: Lallana lines up the shot from 25 yards out but spurns his effort wide.

Klopp will be satisfied with what he’s seen from his much-changed side so far.

17 mins: This definitely has the feel of a derby as Phillips flies in a with forceful challenge on Richarlison and the crowd roar in delight.

If Everton were expected to dominate this game, it hasn’t quite gone that way so far.

Phillips crashes into the back of Calvert-Lewin with a “welcome to the game” kind of foul and Everton have a free-kick.

Sigurdsson whips it in and Holgate is absolutely free, but the defender heads straight at Adrian!

“Looked like you could see Milner saying “hamstring” there. Liverpool could really do with some midfielders back soon if that’s the case.”

8 mins: Worrying times for Liverpool as Milner goes down with an injury and his body language suggests it might be the end of his afternoon.

What a blow this is for Klopp with his lengthy injury list. Young full-back Yasser Larouci comes on for his debut.

6 mins: Save from Adrian!

First scare for the Reds’ backline as Sigurdsson finds Walcott with a ball over the top. It falls to Calvert-Lewin, who strikes at goal from 10 yards and Adrian saves it with his feet.