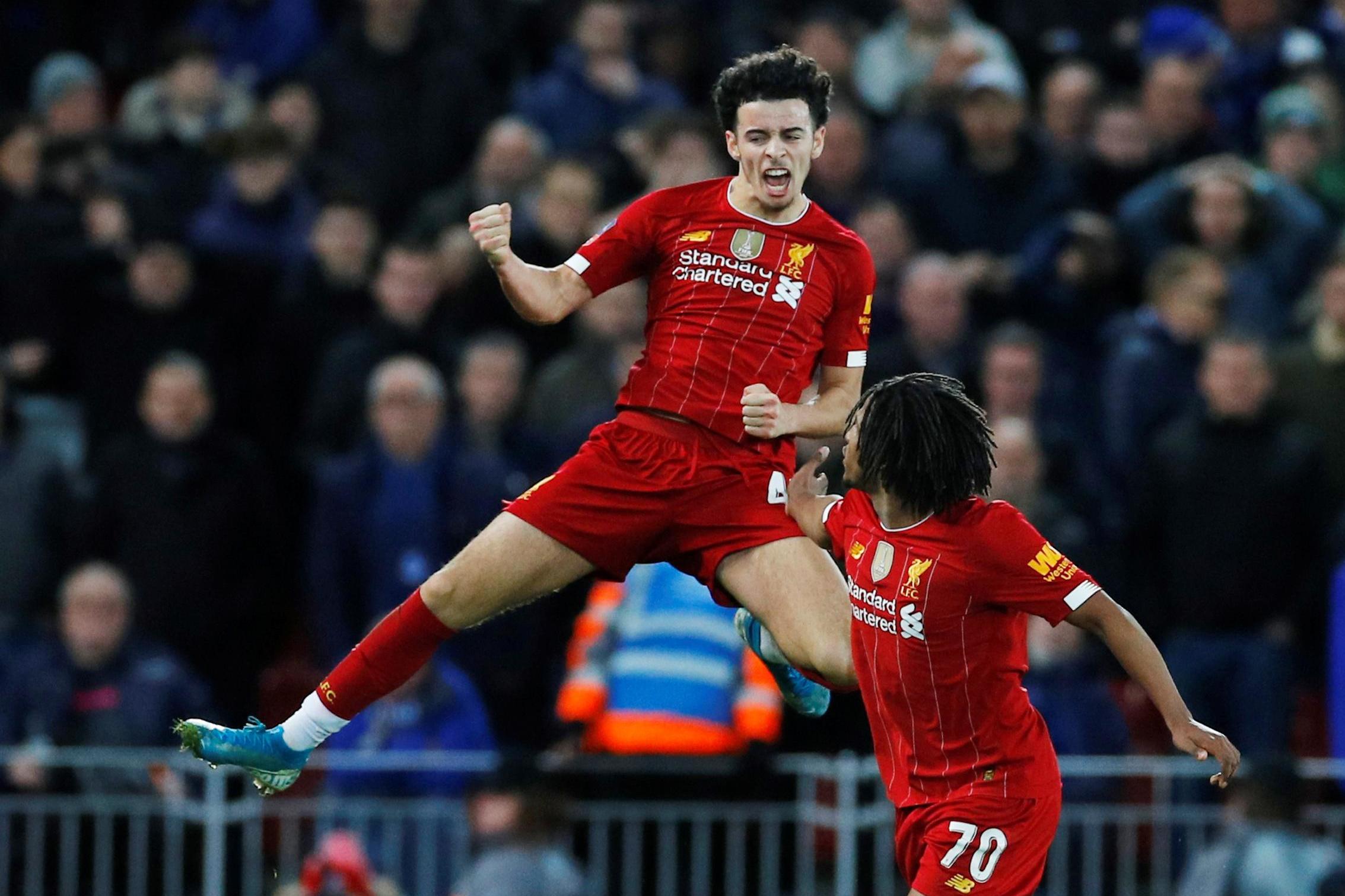 Curtis Jones struck a stunning winner as a youthful Liverpool side defeated Everton 1-0 in the Merseyside derby to seal their place in the FA Cup fourth round.

Jurgen Klopp made nine changes to his side to show that the FA Cup was perhaps not his top priority, with Harvey Elliot becoming Liverpool’s youngest-ever player in the competition at the age of 16 years and 276 days.

Mohamed Salah was rested while Sadio Mane was on the bench as the Reds rotated, while Everton sent out a strong starting line-up as Carlo Ancelotti took charge of his first Merseyside derby.

It was no surprise to see the Toffees start on the front foot with Dominic Calvert-Lewin denied by Adrian, who saved with his feet.

The Reds were forced into an early substitution, with James Milner adding to Klopp’s growing injury list, and on came 19-year-old Yassine Larouci for his debut.

Everton kept throwing men forward and from a free-kick, they should have taken the lead. Gylfi Sigurdsson’s free-kick found Mason Holgate at the far post but the defender headed straight at Adrian.

Liverpool’s young side began to find their feet after a difficult opening with Neco Williams firing wide before Elliott showed glimpses of ability up against Lucas Digne.

Adrian was the hero again, this time to deny Richarlison and once again, with his feet, after the Brazilian’s powerful low strike from Theo Walcott’s cross.

The second half was slightly less frenetic with Everton struggling to maintain the same frequency of chances they had in the first half.

Carlo Ancelotti threw caution to the wind with a double change, sending on Moise Kean and Fabian Delph, but neither had the desired impact.

With the game needing a moment of magic, it was 18-year-old Curtis Jones who provided it. Receiving the ball from Divock Origi on the edge of the area, the youngster curled a stunning effort and it nestled into the top corner off the bar.

It was Jones’ first senior goal for his hometown club and the fans were sent into raptures with the 8,000 or so Everton fans silenced for the first time.

Everton’s efforts to find an equaliser were severely lacking as the under-strength Reds, against all the odds and without their attacking triumvirate, qualified for the fourth round at the expense of their city rivals thanks to the local boy Jones.

Good morning and welcome to Standard Sport’s LIVE coverage of Liverpool vs Everton in the FA Cup third round.

And the Everton side Carlo Ancelotti has picked today…

NINE changes from Jurgen Klopp this afternoon – in comes Takumi Minamino for his Reds debut.

Carlo Ancelotti makes just two changes from the side that put up a decent fight at Manchester City last time out – Theo Walcott and Morgan Schneiderlin are back in the team.

Harvey Elliot will become Liverpool’s youngest ever FA Cup player and their youngest ever player to appear for the Reds in a Merseyside derby at 16 years and  276 days.

What a day for Takumi Minamino to make his debut.

The Reds fans have been excited about the Japanese star making his bow for some time and the day has finally arrived.

Jurgen Klopp’s priorities may be clear but he will still be demanding a win over Merseyside rivals Everton today.

The German clearly has a lot of faith in the Reds’ youngsters and leaving Mohamed Salah at home proves that. Sadio Mane is on the bench if things go haywire, mind.

David Lynch is at Anfield for us to take in the action today. Here’s his first update:

“A fine atmosphere building here at Anfield with the teams in the tunnel. What must those young players in the Liverpool side be feeling right now? And how about the debutant Takumi Minamino? You couldn’t ask for a better setting to make your bow.”

It’s a packed house at Anfield and of course it is – it’s derby day!

You’ll Never Walk Alone reverberates around the stadium as we approach kick-off.

3 mins: A bright start from the home side as Digne whips in a super cross on the volley but Sibide just miscontrols it at the vital moment.

4 mins: It seems Klopp’s pressing methods have rubbed off on the younger players as Elliott and Williams hunt to get the ball back.

The latter crosses to the back post, but Origi can’t get a foot on it.

6 mins: Save from Adrian!

First scare for the Reds’ backline as Sigurdsson finds Walcott with a ball over the top. It falls to Calvert-Lewin, who strikes at goal from 10 yards and Adrian saves it with his feet.

8 mins: Worrying times for Liverpool as Milner goes down with an injury and his body language suggests it might be the end of his afternoon.

What a blow this is for Klopp with his lengthy injury list. Young full-back Yasser Larouci comes on for his debut.

“Looked like you could see Milner saying “hamstring” there. Liverpool could really do with some midfielders back soon if that’s the case.”

Phillips crashes into the back of Calvert-Lewin with a “welcome to the game” kind of foul and Everton have a free-kick.

Sigurdsson whips it in and Holgate is absolutely free, but the defender heads straight at Adrian!

17 mins: This definitely has the feel of a derby as Phillips flies in a with forceful challenge on Richarlison and the crowd roar in delight.

If Everton were expected to dominate this game, it hasn’t quite gone that way so far.

20 mins: Lallana lines up the shot from 25 yards out but spurns his effort wide.

Klopp will be satisfied with what he’s seen from his much-changed side so far.

“A ridiculously frenetic start to proceedings at Anfield and Everton have had the best of it.

“The visitors have gone close through both Calvert-Lewin and Holgate – who really should have scored – and they certainly don’t seem to be carrying on of the baggage associated with their long wait for a win here.”