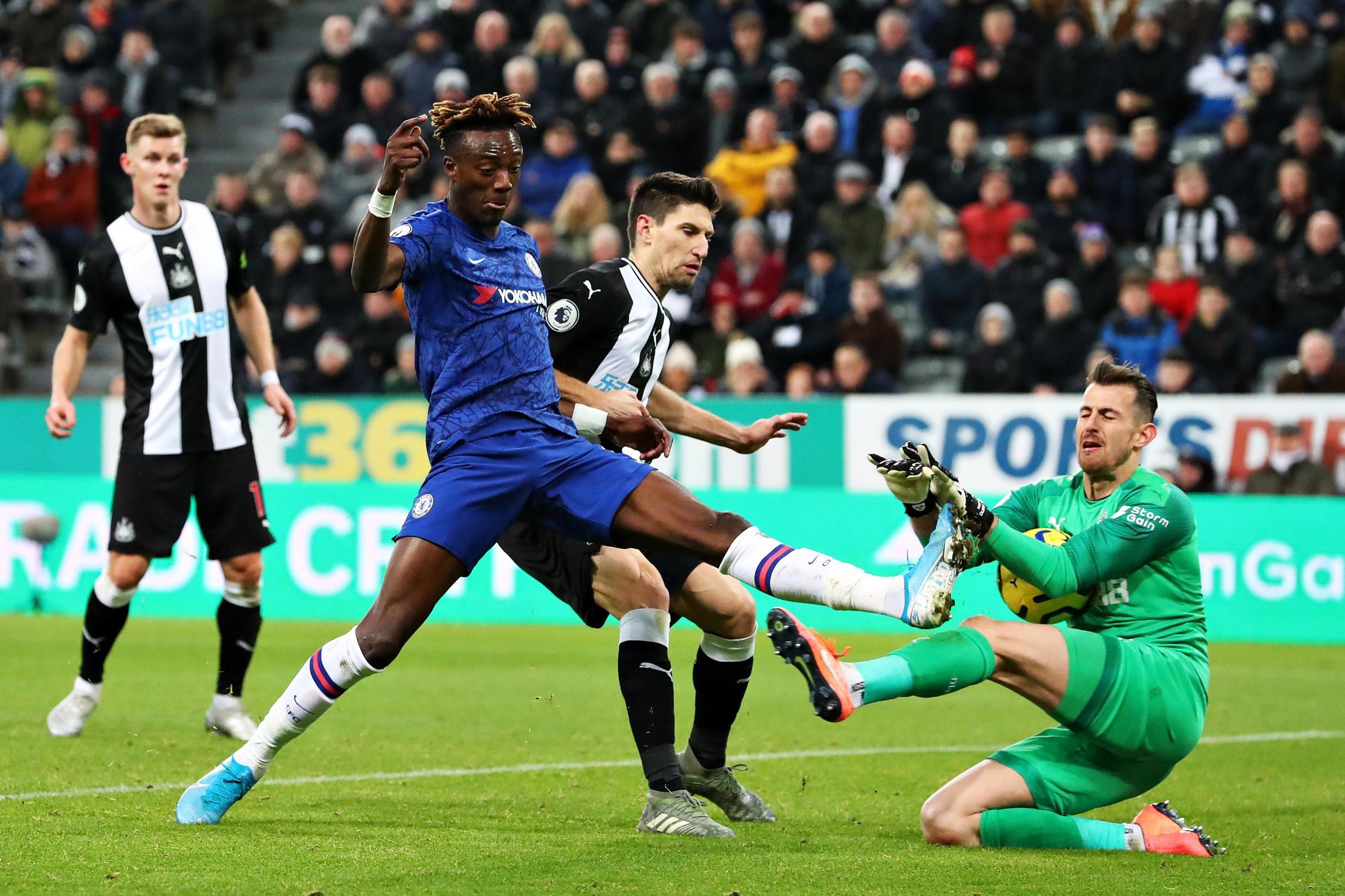 The Blues dominated possession for long periods but failed to capitalise and were undone in the 94th-minute when Hayden climbed above Antonio Rudiger to meet Allan Saint-Maximin’s cross to head past Kepa Arrizabalaga.

With Sheffield United, Arsenal and Tottenham all dropping points earlier in the day and both Manchester United and Leicester not in action until tomorrow, the Blues had a chance to cement their place in the Champions League places.

However, Frank Lampard’s side failed to create many clearcut openings and the sting in the tail here leaves Chelsea only five points above fifth-placed United having played a game more.

Lampard made just one change to the team that beat Burnley last weekend with N’Golo Kante replacing Ross Barkley in midfield, something of a gamble given he had been continuing to manage a hamstring problem.

Newcastle were content to sit deep with a five-man defence when not in possession with the Blues left to probe for a way through.

Jetro Williams was stretchered off injured inside the opening 15 minutes at the end of a long delay which only contributed further to the truncated feel, the Blues only sporadically able to cause problems despite monopolising the ball.

Newcastle’s ambition was limited but they almost took the lead after 21 minutes when Joelinton met a cross from the right eight yards out with a firm header which cannoned back off the crossbar.

Tammy Abraham fired over a few minutes later as Chelsea continued to try and engineer a clear opening. That eventually came from Reece James, who curled an excellent pass in behind the Newcastle defence for Kante but his low drive was turned behind smartly by Martin Dubravka.

Federico Fernandez headed over as another cross from the Newcastle right, this time from Jonjo Shelvey, exposed weaknesses and although Chelsea began to up the tempo before the interval, they only had a Mason Mount free-kick deflected wide to show for it.

Chelsea briefly improved more tangibly at the start of the second period. Willian dragged a shot wide to waste a promising counter-attack before Cesar Azpilicueta drilled a 20-yard effort straight at Dubravka.

Space was beginning to open up but they struggled to capitalise, allowing Newcastle to regroup, prompting Lampard to replace Mount with Barkley for the final 23 minutes.

Moments after coming on, Barkley’s pass was intercepted by fellow substitute Sean Longstaff but into the path of Abraham, who failed to steady himself in steering a low shot off target with Dubravka sprawled at his feet.

Abraham almost found the breakthrough with 11 minutes remaining as Azpilicueta turned Jorginho’s pass into his path but his effort was scrambled clear.

It would be Abraham’s final contribution as Lampard sent on Michy Batshuayi but another substitute, Emerson Palmieri, almost won it when his low drive was deflected just wide after Willian’s cross had been cleared into his path. Instead, it was Hayden and Newcastle who had the last laugh.

Bruce has confirmed it looks “serious” for Jetro Willems after coming off injured and hinted they will need to sign a left-back in January.

“Talk about smash and grab! The one thing we did do was defend very well. We showed great resilience and when you defend against the big boys, the way they’ve done it, you can’t fault their effort and endeavour.”

A massive blow for Chelsea there.

They pushed hard, had some glorious chances to win the game themselves and then, with seconds to go until the final whistle, concede from a set piece.

Frank Lampard might just be considering a U-turn on his comments about making a signing in January after his side’s eighth defeat of the season.

Unbelievable drama right at the end. Chelsea dominated this contest but go back to west London empty-handed after Hayden’s header in the final seconds of stoppage time.

RIGHT AT THE DEATH! Hayden heads home from a short corner and there will be question marks about the defending and Kepa’s goalkeeping.

But Newcastle won’t care – they have somehow secured all three points!

90+3 mins: Joelinton wins a late corner off Christensen and the crowd cheer in anticipation.

Will Chelsea defend it as valiantly as Newcastle have?

90+1 mins: Hudson-Odoi has looked a threat but, leaning back, shoots over from the edge of the box.

90 mins: There will be four minutes of added time to be played.

Is there enough time for a winner?

87 mins: A rare opportunity for Newcastle as Almiron clips one to the far post, Saint-Maximin cuts it back and Joelinton blazes wide.

84 mins: Emerson goes into the book, apparently for simulation, after going down in the box. The replay shows that was a tad harsh.

83 mins: Another incisive breakaway from Chelsea is led by Willian and his cutback evades everyone but Emerson, who strikes it from distance and Fernandez crucially heads it wide for a corner.

82 mins: Hudson-Odoi switches to the left and cuts it, spotting the run from Batshuayi, and his cross is inches away from reaching the striker.

The pressure is building now.

81 mins: That was Abraham’s last action in the game as Lampard brings on Batshuayi.

Will the Belgian make an impact?

That was the chance!

Jorginho’s floated ball finds Azpilicueta as the most advanced man. He wins his duel with Clark and nods it down to Abraham, who tries to prod it past Dubravka but it’s another fine stop from the Czech.

“This has become somewhat attritional now. Lampard has Batshuayi warning up and he won’t wait much longer if it stays like this.

“Newcastle have tightened up again defensively and Chelsea are struggling with their combination play in the final third. They still have the majority of the ball- time to do something with it.”

78 mins: Newcastle are having to defend deep on the edge of their box but it’s working a treat. Chelsea just can’t find a way through.

74 mins: Bizarre. James takes a throw-in but then collapses to the ground, indicating he needs to come off. But the referee says Chelsea must play with 10 men.

Finally, Emerson is stripped and ready to come on. Azpilicueta will move to right-back.

The Chelsea striker’s eyes light up after Jorginho’s dink through isn’t dealt with and he takes it round Dubravka, he gets his feet muddled up and fires wide.

A big chance for Chelsea.

71 mins: James has made it back onto the pitch but doesn’t look too comfortable.

Lampard may be forced into a change here.

70 mins: Newcastle use the break in play to send on Sean Longstaff for Krafth.

That could mean a switch to back four now.