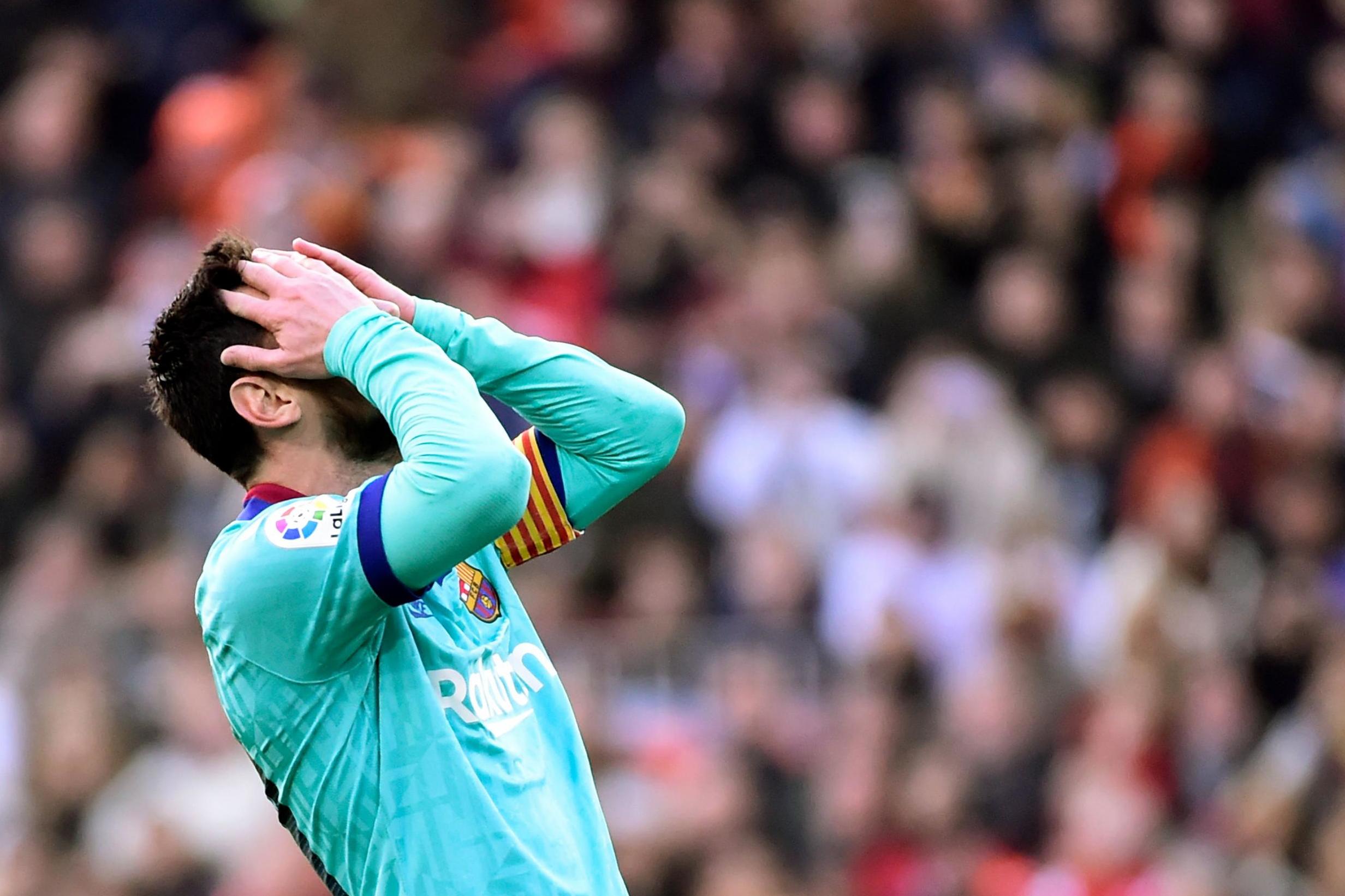 Barcelona’s loss away to Valencia on Saturday was their fifth defeat of the season in all competitions and, more significantly, a first under new coach Quique Setien.

LaLiga losses at Athletic Club, Granada and Levante had increased pressure on Ernesto Valverde and the 55-year-old was sacked after Barca went down to Atletico Madrid in the Spanish Supercopa earlier in January.

And at Mestalla, where Barca had not lost to Valencia since 2008 and were unbeaten in LaLiga in 13 years, Setien suffered his first setback.

Setien has a clear idea of how he sees football and how he wants Barcelona to play. Right now, though, his players are struggling to get to grips with the new vision.

Previous coach Valverde was unpopular with fans and should have been removed in the summer. That created a problem for the board and the mid-season change to a new man and a different style of play was always going to present difficulties.

After some encouraging signs in last Sunday’s 1-0 win over Granada, Setien’s side scraped past Segunda B outfit Ibiza on Wednesday night and lost to a Valencia team without two of their best players on Saturday as Dani Parejo sat out through suspension and Rodrigo Moreno came off the bench late on after his recovery from injury.

“Maybe there are some things the players aren’t interpreting well,” Setien said after the game. “Or perhaps we aren’t explaining them well enough.”

Clearly that will take time, but talk of a transitional period from some observers is unrealistic. Setien was employed to save the side’s season, not simply to play pretty football.

Problems on the road continue

All of Barcelona’s defeats in 2019-20 have come on the road, and away from Camp Nou, the team continues to look vulnerable. That was evident once again on Saturday.

“We played passes without depth and we don’t work for that,” Setien said. “There are things we have to correct. We improved in the second half, but it wasn’t enough.”

Following the scare in Ibiza and the loss at Mestalla, the 61-year-old will be relieved that two home games are up next, with Leganes in wait in the Copa del Rey on Tuesday, before a LaLiga match against Levante next Sunday.

After that, a trip to his former club Real Betis awaits on February 9, with a visit to Napoli in store later in the month and the Clasico away to Real Madrid on March 1. Improvement is needed – and soon.

Setien’s sides have always been better in attack than they are defensively and that is one concern as the new coach looks to bring about a change of fortunes at Barcelona. Away from home especially, the team continues to look vulnerable at the back.

When the Catalans conceded away to Ibiza early in Wednesday’s game, it was the 15th time this season they had gone behind after their rivals’ first shot of the entire match. And on Saturday, although that did not happen, the Blaugrana did give away a penalty from Valencia’s first attack.

Marc-Andre ter Stegen saved the spot-kick and also pushed a fierce shot from Maxi onto the bar, but was unfortunate as the Uruguayan’s effort deflected off Jordi Alba for the first goal and was given little chance when the striker was left all alone by Barca’s defence for the second.

“We have to improve in a lot of aspects,” Ter Stegen said afterwards. And for Barca to have any hope of competing in the Champions League’s latter stages, some solidity at the back will certainly be needed.

For all the criticism of Luis Suarez from fans in recent times, and especially his failure to score away from home in the Champions League since 2015, Barcelona still rely heavily upon the Uruguayan.

Without him, Lionel Messi’s influence is also restricted and on Saturday, the Argentine missed that almost telepathic understanding he shares with the former Liverpool striker.

Messi had 11 of Barca’s 14 shots at Mestalla and came close to scoring. Never has he had that many attempts without converting and at times, it seemed he was the only one willing to have a go.

Ansu Fati, Frenkie de Jong and substitute Ivan Rakitic each had an attempt, but Barca badly missed Suarez and a focal point in attack. With the Uruguayan out for four months after knee surgery, signing a striker should be a priority this month.

Too much strain on Ansu Fati

Ansu Fati has started all three games since Setien’s arrival and while the youngster will be pleased at being central to the coach’s plans, the forward is also under too much pressure for a 17-year-old.

With Suarez sidelined, Ousmane Dembele not ready to return and Carles Perez seemingly heading to Roma on loan, Fati’s importance has increased and he offers a quality which is lacking in the rest of the team – real pace.

But Saturday was a disappointing afternoon for Ansu. According to Sport, he passed backwards 26 times out of 30, while he failed to track Gaya for the penalty and for the opening goal. He also wasted a good opportunity early in the second half.

Most worrying of all, he seemed to lack any kind of spark. Perhaps it is too much, too young for the teenager. Earlier this season, Barcelona were careful to manage the youngster and shield him from publicity. Maybe it is time to take him out of the firing line for a while.