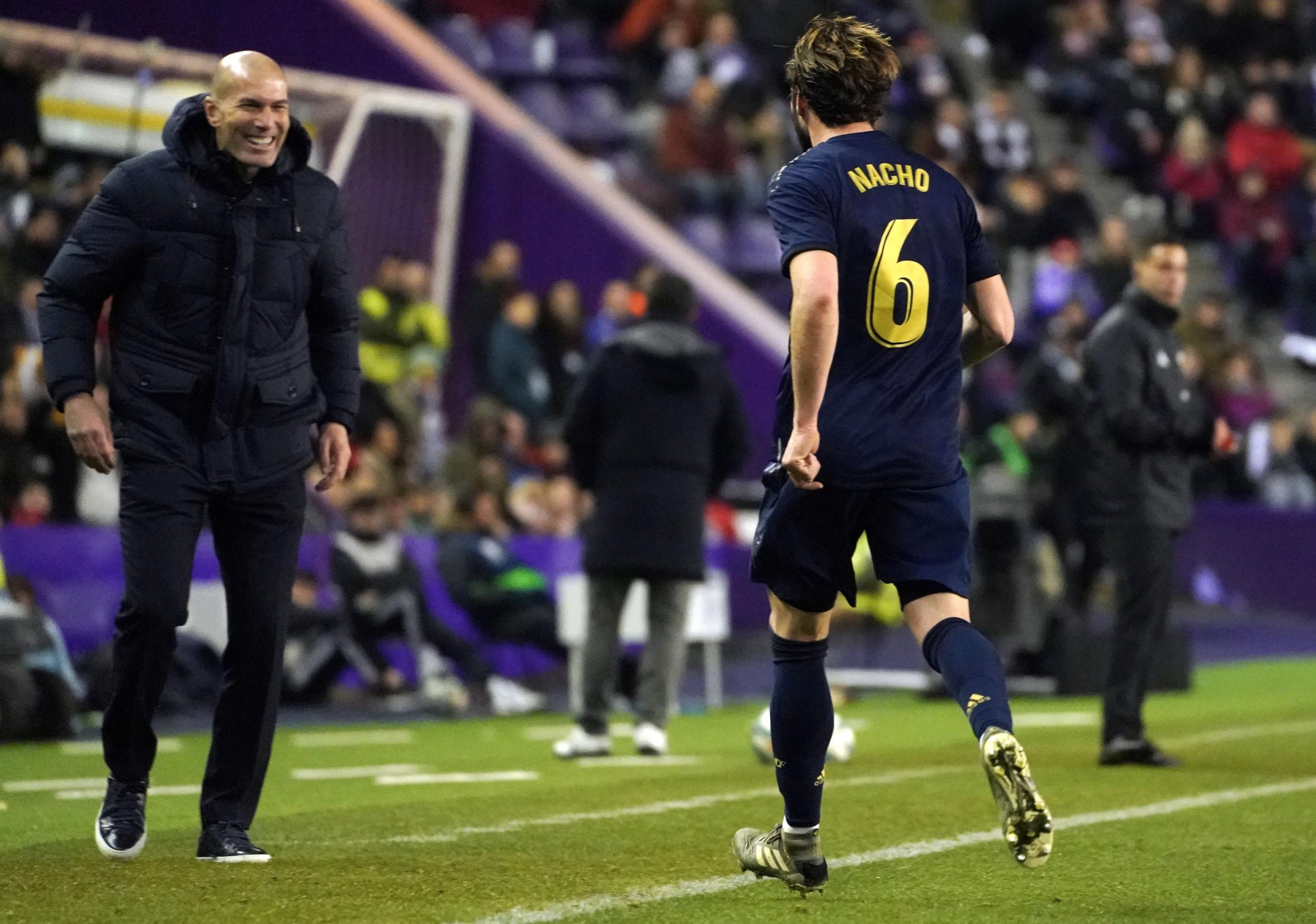 On Real Madrid’s last visit to the Jose Zorrilla, the lights went out. The power cut before kick-off seemed an appropriate metaphor for Los Blancos at the time and it turned out to be just that.

Solari’s short spell in charge was bookended by wins against Real Valladolid. But the problem was what came in between and, in particular, in the week prior to that second game.

Madrid lost back-to-back Clasico clashes in LaLiga and the Copa del Rey and were thrashed 4-1 by Ajax in the Champions League.

There was no way to recover and as the Argentine departed, Zinedine Zidane returned. Back in Valladolid on Sunday, 10-and-a-half months later (322 days in total), the Frenchman’s side secured a win which takes them to the top of the table – three points ahead of Barcelona.

Madrid did just about enough to seal victory.

Nacho Fernandez, in the team thanks to the suspension of right-back Dani Carvajal and because Alvaro Odriozola has moved on loan to Bayern Munich, glanced in the winner with 12 minutes left after Toni Kroos had put the ball back in from a corner of his which had been initially cleared.

“Before his goal I told him to go up and attack the near post,” Zidane said afterwards.

It worked. And the defender ran over to the side of the pitch to hug his coach. “He told me to go up and in one of life’s coincidences, the ball fell to me,” he said.

Zidane has a knack of producing this type of thing and so often over his two spells as coach, players who have ended up coming into the team because of injury have ended up delivering.


Nacho’s goal takes Madrid to the top after Barca lost in Valencia on Saturday and with only Karim Benzema scoring prolifically this season, help from elsewhere has been invaluable in recent weeks.

Away to Getafe in early January, centre-back Raphael Varane chipped in with two goals (although one was given as an own goal). Then, last Saturday at the Santiago Bernabeu, a double from defensive midfielder Casemiro clinched a 2-1 win. On Sunday, it was Nacho’s turn.

“He is very professional,” Zidane said. “When he has to compete, he does so and really well. He’s from the youth system. I’m happy for his goal and happy we have different players who can score for us.”

Nacho also helped Madrid to keep a clean sheet and with just 13 goals conceded this season in LaLiga, their defence is the meanest in Europe’s top five leagues.

“Defensively, what we are doing we are doing really well,” Zidane said. “It’s our strength. We are strong and we all defend. When we lose the ball, we win it back high up the pitch.

“If we don’t concede, we have a lot more chance of scoring a goal [and winning] and that’s what happened today.”

Solidity at the back has not always been associated with Zidane’s sides, but the Frenchman has favoured the use of more midfielders or harder-working forward players in his second spell (Cristiano Ronaldo’s presence had made that more difficult before, despite his many other qualities).

And in Kroos, the team has a player capable of finding team-mates with pinpoint passes and set-pieces into the area. Earlier, the German had set up Casemiro for a header which was disallowed for a marginal offside.

“Kroos, Isco, Rodrygo, Lucas [Vazquez] when he comes on… we have players with that quality and we have others who can finish when we cross,” Zidane said. “It’s part of football and in that aspect, we know we can score.”

It is another detail which has helped to transform Madrid’s fortunes since their last visit to the Jose Zorrilla in March.

Zidane has his Real back on top and if they can stay there after next weekend’s derby and the Clasico at home to Barca on March 1, LaLiga will be theirs to lose.