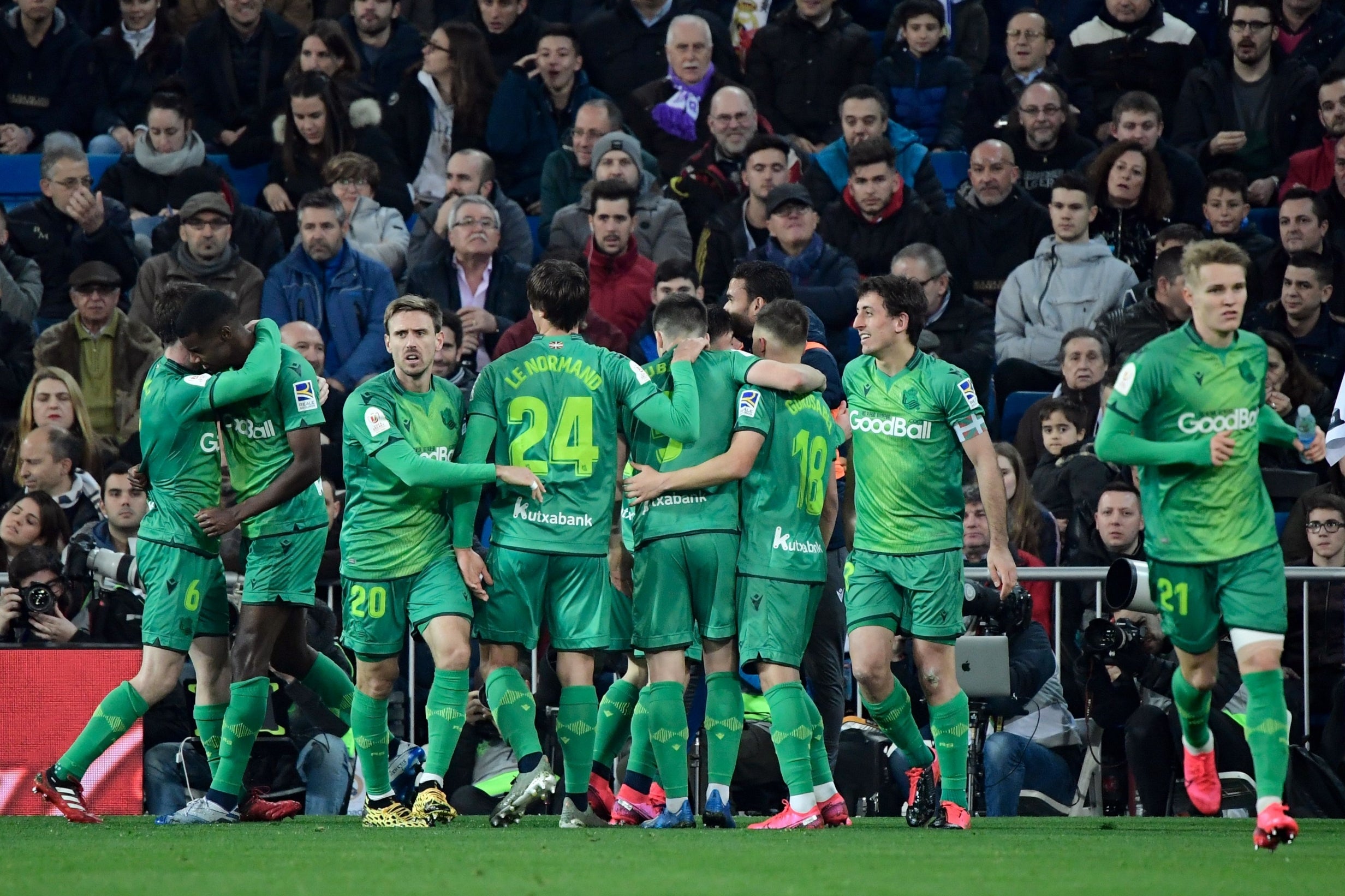 Real Madrid were knocked out of the Copa del Rey as 20-year-old Swedish striker Alexander Isak inspired Real Sociedad to a thrilling 4-3 win at the Santiago Bernabeu.

Isak scored twice and set up another for substitute Mikel Merino to end Madrid’s 21-game unbeaten run and book the visitors a spot in the semi-finals.

Zinedine Zidane made seven changes to the side that had beaten Atletico in the Madrid derby at the weekend, with Sergio Ramos, Toni Kroos, Fede Valverde and Karim Benzema the only survivors.

Reserve goalkeeper Alphonse Areola was among those to come into the side, but was at fault when Real Madrid loanee Martin Odegaard opened the scoring on 22 minutes, letting the Norwegian’s tame effort squirm through his legs.

Vinicius Jr. looked Madrid’s most lively attacking outlet, while James Rodriguez and Valverde both tested Alex Remiro from range looking for an equaliser, before Ramos headed against the crossbar, though his effort would have been ruled out for offside in any case.

However, the visitors could easily have been two to the good before the interval, as Isak wasted two good chances on the counter-attack, blazing over on both occasions.

Zidane’s response at half-time was to send Luka Modric on in place of James, but before he had had chance to make an impact the hosts were very further behind as Isak slotted home from Odegaard’s terrific pass, only for VAR to rule it out for offside.

The away side did not have to wait long though, as Isak scored twice in four minutes to stun the Bernabeu, first finding the net with an acrobatic volley from substitute Ander Barrenetxea’s cross and then lashing a terrific finish high into the roof of Areola’s net from a tight angle.

Marcelo provided an immediate response, drilling in off the base of the near-post with question marks over Remiro’s goalkeeping, but the three goal cushion was restored when Isak turned provider, steering across goal for Merino to add his name to the scoresheet.

Still the drama was not done though, as Vinicius had a header ruled out by VAR for offside, only to set up substitute Rodrygo to make it 4-2 seconds later, but there was to be no late comeback as Madrid were beaten at home for the first time all season.

Still the drama was not done though, as Vinicius had a header ruled out by VAR for offside, only to set up substitute Rodrygo to make it 4-2 seconds later, and when Nacho headed into the corner in stoppage time it teed up a grandstand finale, but the underdogs held on to inflict Madrid’s first home defeat of the season, despite the late sending off of Andoni Gorosabel.

Madness. What a game.

90+6 mins: Carnage! Andoni Gorosabel is sent off for a ruthless foul on Vinicius down on the near touchline.

Wow! Nacho heads into the corner and Madrid are alive and kicking!

90 mins: Six minutes of added time after those VAR delays…

This one counts, a simple finish from Vinicius’ cut back. Still time?

We’ve had one at each end now – Remiro’s blushes are spared by VAR after he pushed the tamest of headers from Vinicius into his own net.

76 mins: Zizou has to go for it now. Rodrygo and Luka Jovic are on in place of Brahim Diaz and Fede Valverde.

Game over? Isak turns provider this time, steering across the face of goal and Merino turns it home!

64 mins: Odegaard gets a decent ripple of applause as he makes way for Ander Guevara.

Game on! Remiro shouldn’t really be getting beaten from here, but Marcelo’s shot his the near post and squeezes in.

They’ve got another! Real Madrid are in big, big trouble as Isak cannons home another wonderful finish at the near post!

This one will count!

The half-time substitute Barrenetxea gets to the byline and chips back for Isak who finishes brilliantly with an acrobatic volley!

What a let off for Madrid. They’re cut apart by a brilliant Odegaard pass and this time Isak is clinical but VAR shows he’s just offside.

46 mins: Changes afoot for both sides at the interval. James Rodriguez has made way for Luka Modric, while Ander Barrenetxea is on in place of Adnan Januzaj.

So work to do for Real, who trail to a 22nd minute goal from one of their own, Martin Odegaard. A reminder of course that this is a one-off tie rather than the two-legged affairs we are familiar with in this competition, after the format was changed to help accommodate an expanded Spanish Super Cup.

45 mins: What a chance! Brilliant distribution from Remiro sets Sociedad away and Isak looks to be in on goal. Credit the covering defender for getting across to put him under some pressure, but he should still do better than blasting high.

43 mins: Would’ve been controversial, this one, because Real Madrid are sure there’s a handball on halfway but play is waved on and later in the move Isak is not far away from finding the net, firing just over.

38 mins: Miles better from Madrid. More good work from Vinicius tight to the byline, and though Remiro nudges his cross away it’s only as far as Valverde, who lashes back towards him and the ‘keeper tips over.