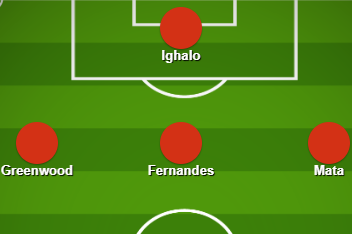 Odion Ighalo could start his second straight game for Manchester United despite admitting he is not yet fully fit.

Anthony Martial is a doubt for the clash with Everton on Sunday, meaning the deadline-day loan signing could lead the attack at Goodison Park.

Ighalo scored on his first start for United in their 5-0 win against Club Brugge on Thursday.

Ole Gunnar Solskjaer will hand Martial a late fitness test over the weekend to see if he can recover from a knee injury, but insists Ighalo is ready and waiting to take the France striker’s place.

He said: “Odion has definitely shown what type of striker he is. He’s ready for that game on Sunday.

“I don’t know about Anthony, to be honest. I’ve not asked. He tried this morning (Thursday) so he wasn’t that bad, but we’ll have to do a scan tomorrow (Friday) probably.”

Ighalo is still building match sharpness after his move from Shanghai Shenhua, and despite scoring on Thursday, admits he still to get fully up to speed with English football.

“I’m getting better,” he said. “I know I’m not 100 percent fit. My last game I played was December 6. That’s when I played in the Chinese league, in the FA Cup final in China.

“So I’m getting there bit by bit. The league is faster, stronger, you need more strength. I’m getting better every day, but I’m not 100 percent fit.”