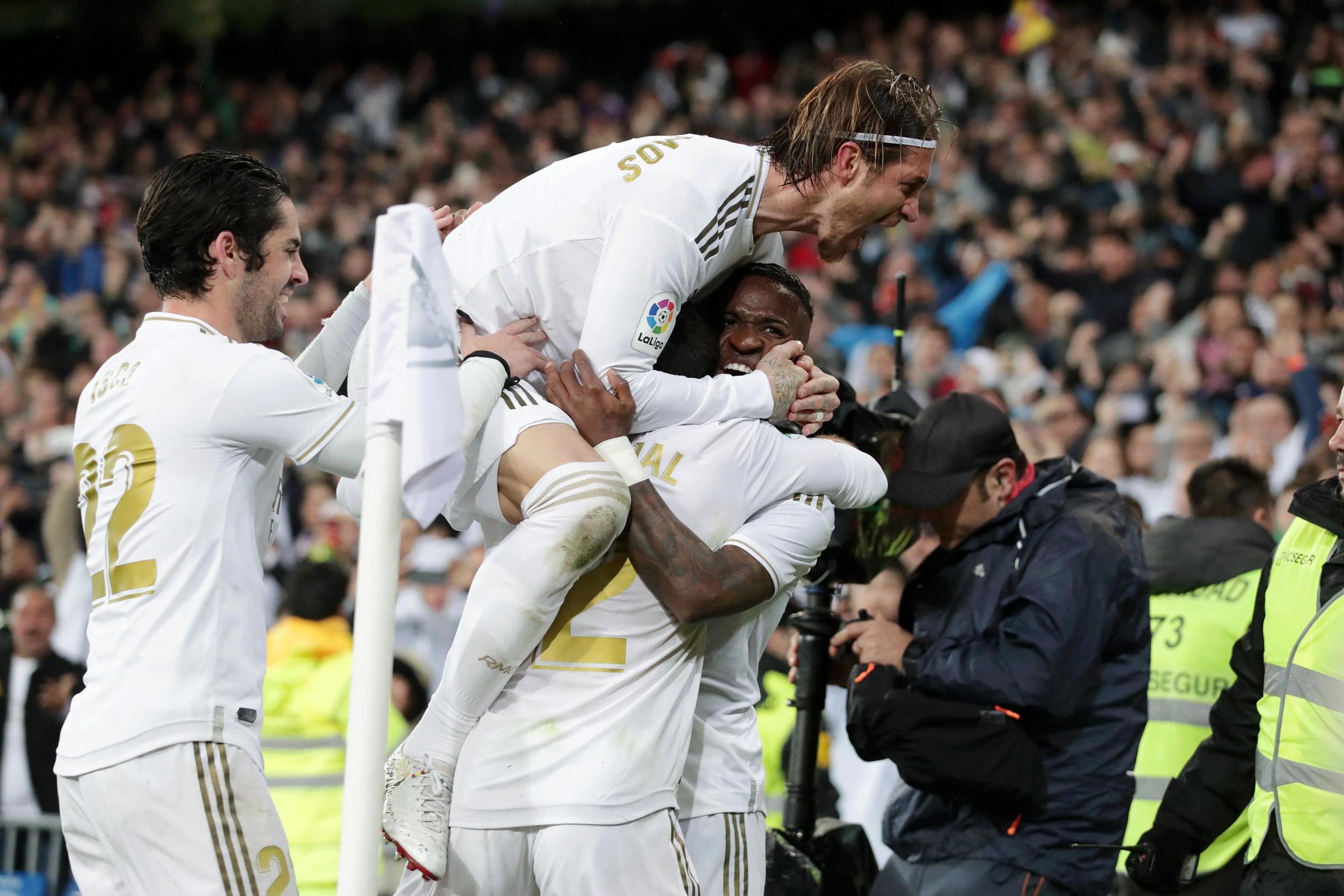 Real Madrid earned a first Clasico win over Barcelona at the Bernabeu in six years as Vinicius Junior and Mariano settled an end-to-end derby.

Was alert to come out of his area early on, made a comfortable save from Messi after 30, before an amazing stop to deny Arthur when the Brazilian was one on one late in the first half. Key to this victory.

Was booked for a spat with Alba early on, but this was hugely improved after a poor performance against City on Wednesday. Got across to make a vital interception to block a Vidal shot late in first half, won ball back brilliantly and set up Benzema for a chance after 62 minutes. Defended well and contributed in attack. His quick throw-in set Mariano away for the clincher.

Made one good early interception, headed away Messi free-kick early in the second half. Sent a cross out of play at the other end, but his positioning was intelligent as he snuffed out a number of Barca attacks.

Helped Varane clear up at the back after a dangerous Barca beak. One or two lapses in concentration, but was solid overall and led the back line with authority. Late free-kick hit the wall

Linked up well with Vinicius on the left and gave Madrid another outlet in attack. Also got back to defend well. Was beaten by Braithwaite late on, but much improved then in recent matches. Turned out to be a good call by Zidane.

Earned applause for a clever turn in the first half. Linked up well, was lucky not to be booked for foul on Messi in second half, had a wild shot over the bar after 58 minutes and made a super tackle at feet of Busquets later on.

Worked hard on his return to the team and his quick passing allowed Madrid to break from deep positions. Well off target with a couple of long-range efforts.

Whether he plays well or not, his running and energy is so important for Madrid. Chased and won the ball back all night and left the pitch to an ovation late on.​

His header back almost found Benzema early on in the game. Tracked back and worked extremely hard. Almost scored with a super curler after 56 minutes, which Ter Stegen pushed over. Had a header saved from the German shortly afterwards and cleared off line by Pique. Was replaced by Modric and left the pitch to an ovation.

Volleyed over bar from edge of box early on. Linked up extremely well as he dropped deep. Crashed a volley over from a great position in the second half when he should have at least hit the target. Was replaced by Mariano in added time.

Caused Barcelona problems all night with his pace. His final ball was so erratic, but his persistence paid off in the end as his shot went in off Pique and gave Madrid the all-important breakthrough.

Misplaced a couple of passes early on which allowed Madrid to attack. Made a super save from an Isco curler after 56 minutes. Saved an Isco header after that and was grateful as Pique cleared off his line. Went up for late free-kick. Unlucky as Vinicius shot wrong-footed him for the first goal and could do little about the second.

Got forward down the right whenever possible, but was forced back by Marcelo and Vinicius and endured a difficult night.

Was charged with bringing the ball out form the back for Barca. Intercepted a Vinicius cutback after 52 minutes, made a great sliding tackle to deny the Brazilian later on, then cleared Isco header off his line. Was unlucky to deflect Vinicius’ shot into his own net, got his header all wrong when unmarked after 82 minutes.

Carried the ball forward from the back early in the second half. Linked up well and was solid overall alongside Pique. Getting back to the player he was before all the injuries.

Looked to get forward but was pushed back on a number of occasions. Booked for a skirmish with Carvajal and struggled against his international team-mate. Set up Griezmann for a good chance after 20 minutes.

Pulled the strings for Barca in midfield. Played some super passes from deep positions, including a delightful ball through to Messi in the area after 66 minutes. Probably Barcelona’s best player on the night.

Dropped very deep early on. Played lovely through-ball for Vidal after 30 minutes. Saw a one-on-one chance with Courtois saved by the Belgian when he should have done better.

Got to the area early on but was pushed back. Still seems unsure of his role and despite showing plenty of energy, he was not really effective in dangerous areas. Worked hard defensively.

Was caught in possession on a number of occasions. Worked hard and got into a couple of decent shooting positions, but one effort was weak and another blocked. Went off in the second half.​​

Whistled early on, he laid off some good balls to team-mates, but was way below his best. Saw a shot easily saved by Courtois in the first half and hit another straight at the Belgian. Was booked for a foul on Casemiro late on.

Almost got in after 17 minutes, but was crowded out. Curled a good chance over the bar, but had one of his ineffective nights. Offered little and was substituted in the second half.