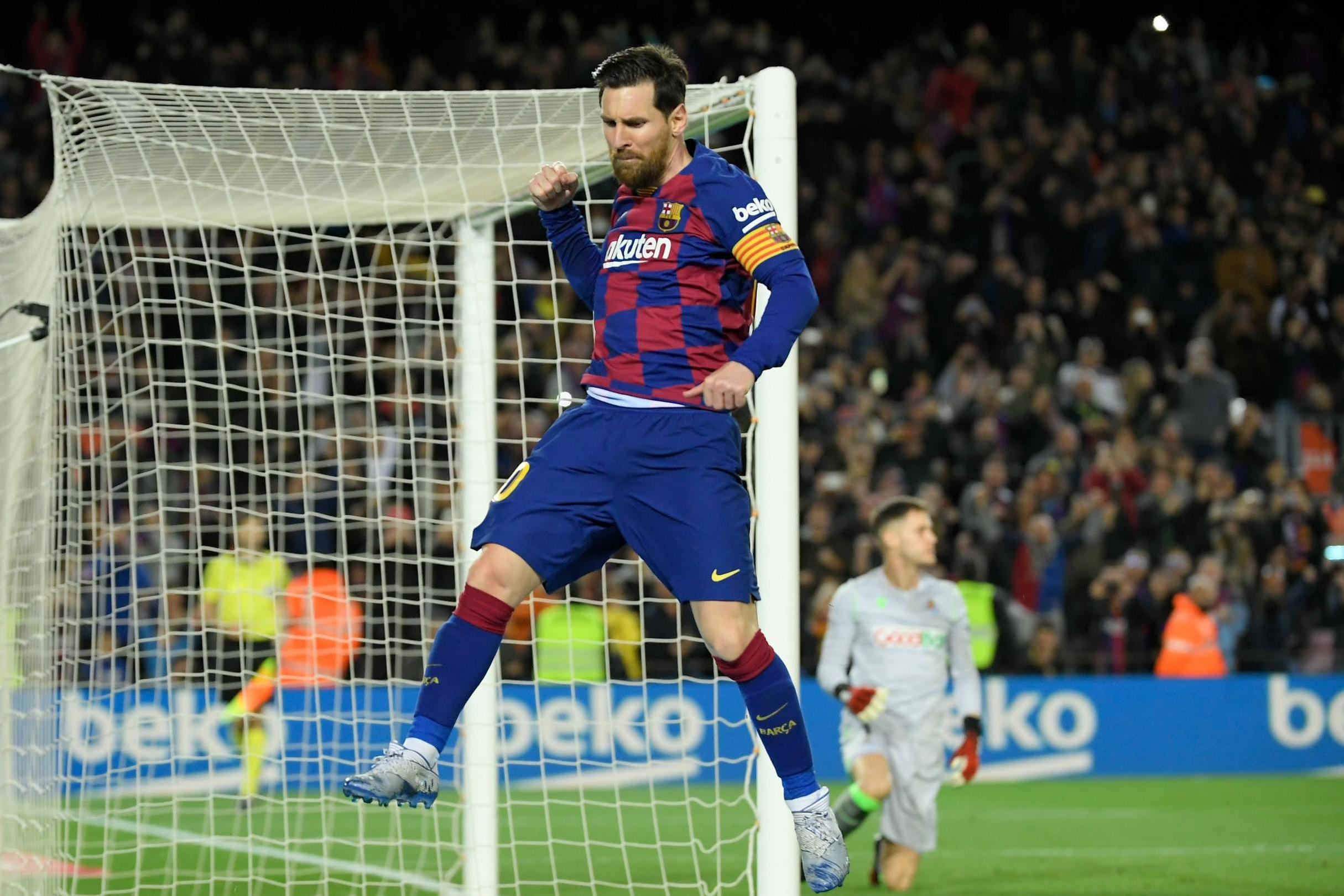 It took 81 minutes, but Barcelona found the breakthrough in the end and claimed all three points in their LaLiga clash at home to Real Sociedad.

The Basque side had lost their last 23 league games at Camp Nou and were without even a draw here since 1995, their last win at Barca’s home having come almost 30 years ago.

But Imanol Alguacil’s side were on a high after making the Copa del Rey final earlier this week and it looked like the visitors might frustrate Barca until Lionel Messi’s late penalty.

Jordi Alba saw a second ruled out deep into added time, but Barcelona’s 1-0 win sees the Catalans move provisionally two points ahead of Real Madrid, who are in action away to Real Betis on Sunday night.

Messi and VAR save sluggish Barca​

Barcelona struggled to play the ball out from the back and were second best to Real Sociedad in some phases of the match, conceding several chances to the Basques and looking vulnerable on the counter.

But the victory arrived from a familiar source in the end: Lionel Messi. The Argentine hit home a late penalty after VAR intervened and penalised Robin Le Normand for handball.

Was it the correct call? It was certainly not clear and obvious and appeared unlucky from Real Sociedad’s point of view as the ball hit the player on the upper arm, but is one of those which are often given. The problem is the consistency: sometimes they are awarded and other times, not.

Some also pointed to Arturo Vidal being in an offside position in the build-up, but the Chilean did not touch the ball nor interfere in the move. In the away fixture at Anoeta, Barca had reasons to feel hard done by after a dubious penalty was given against them and a seemingly clear one not awarded, so perhaps they deserved their luck with VAR this time around.

Barcelona’s assistant coach, Eder Sarabia, has been in the spotlight this week since a video of the 39-year-old in last Sunday’s Clasico defeat to Real Madrid emerged. In it, he was seen shouting furious instructions and amid a string of expletives, was complaining that the players were not doing what they were supposed to.

The video, which was broadcast by Movistar and used lip readers to decipher his words, supposedly did not go down well with Barca’s dressing room and Setien even took the unusual step of apologising for his assistant’s actions.

But the fans were clearly on his side, with those behind Marc-Andre ter Stegen’s goal singing Sarabia’s name for the first seven minutes of Saturday’s match.

“It seems like he has killed someone,” Jordi Alba said afterwards. “Now it seems the coaching staff can’t express themselves as they want to and it’s not true. He hasn’t disrespected anyone. In his place, I would have done the same or worse. We are not annoyed.”

Gerard Pique also denied there was a problem. “These things appear when the club is in a moment of weakness,” he said. “It’s totally normal that he expresses himself that way. He said sorry and we told him that for us, he didn’t have to.”

Given Barcelona’s recent problems on and off the pitch, Josep Maria Bartomeu is under even more scrutiny than ever at Camp Nou and before kick-off, fans waved white handkerchiefs to protest against the president. There were also chants of ‘Bartomeu, dimisión’ (Bartomeu, resign).

Barca’s fans whistled Real Sociedad on occasions when the Basque side played the ball around at the back and in midfield, while those same supporters also directed some of their frustrations at their own players.

And Alba celebrated his strike in added time (which was subsequently ruled out for offside) by covering his ears in a gesture aimed at the Barca fans.

“Nothing, all good,” he said afterwards. “Nobody likes it when the fans are against you. I respect the crowd, but they also have to respect me. I don’t like it when they whistle in the 15th minute when it’s 0-0. I’m angry in general, not with the fans.”

Pique holding Barcelona together at the back

Gerard Pique receives a lot of criticism from the media and even his own fans, but the Catalan defender continues to be one of the club’s most consistent performers.

The centre-back was unfortunate last weekend in an otherwise excellent display as Vinicius Junior’s shot deflected off him and in for Real Madrid’s opener in El Clasico and he was outstanding for the Blaugrana on Saturday.

Pique recovered nine balls, brought the ball out effectively from the back and there was a sense that he was holding Barca’s entire back line together. Not for the first time, either.

“He played another extraordinary match,” Setien said afterwards. “Just like last week. Both with the ball and without it. Also with how he talks.”

Real Sociedad are a spectacular team

Real Sociedad held Barcelona to a 2-2 draw at Anoeta earlier this season and knocked Real Madrid out of the Copa del Rey with an amazing 4-3 win at the Santiago Bernabeu in early February.

On Saturday, the Basques left with nothing, but shone again with almost 46% of the possession (very high for a visiting team at Camp Nou) and nine attempts at goal (to Barca’s 13).

“A draw would have been a fair result,” coach Imanol Alguacil said. And he added: “The team is young. We have 10 or 12 players who were playing in Segunda B four years ago. That says much about how la Real work with the youth system.

The Basques reached the Copa del Rey final earlier in the week and Setien was impressed with their play on Saturday. “La Real have three or four players who could perfectly play for Barcelona,” he said.