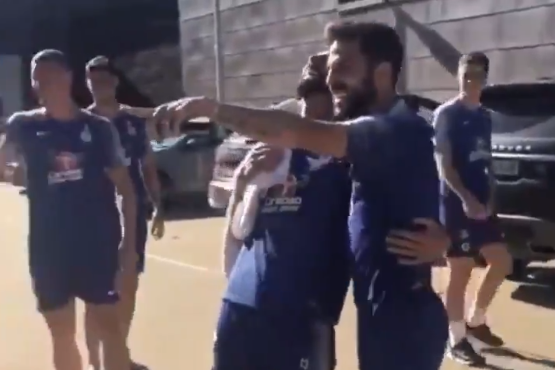 Cesc Fabregas has explained how he ended up buying a Range Rover for former Chelsea team-mate Willy Caballero in 2018 after a training ground bet went wrong.

With most top-level European football suspended as a result of the coronavirus pandemic, the Spanish midfielder – who now plies his club trade in Ligue 1 with AS Monaco – attempted to provide some comic relief on social media by hilariously recounting the circumstances which led to the purchase after the story was first mentioned by former Blues youngster Marcin Bulka during an interview last month.

After receiving no shortage of questions in the aftermath of the tale coming to light, Fabregas confirmed how his overconfidence from the penalty spot came back to haunt him – and why there wasn’t much of an impact on his bank balance despite losing the wager.

“So, after a player already told the story to the press of what happened one day in 2018 and many people asked me if it’s true, there we go,” Fabregas – who made 198 appearances in a four-and-a-half year stint at Chelsea that ended in January 2019 – wrote on Twitter.

“Many times for many years after training, I stay a little bit longer to take some penalties. I always made little bets with the goalkeepers to put a bit of spice into the challenge.

“For some reason, I never really missed one. So one day I got too confident & it got a of out of hand. It was Willy Caballero’s turn and I told him that if he saved it I’d get him a Range Rover.

“Unfortunately for me, he saved it in front of the whole team so u can imagine how it went… I went from feeling the most confident, to feeling the most stupid guy on earth Smiling face with open mouth and cold sweat.

“Everybody obviously was shouting and laughing that I had to pay my debt. I went to a scrapyard and I found a destroyed Range Rover that couldn’t be used at all for £950 so I said, you know what? I’ll get that.

“The next day they they brought to the training ground and well… I’ll show you the rest on a video. The lesson of the story is: Don’t bet at all at any cost.”

Fabregas ended the thread by posting an amusing video of the moment he presented Argentine ‘keeper Caballero – who is led into the car park with a towel over his head – with his new set of wheels, complete with a neat bow on the bonnet and crack in the windscreen.