Rennes midfielder Eduardo Camavinga is now being followed by Liverpool. 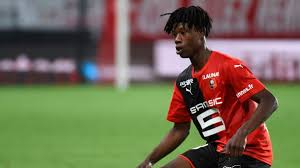 Sport says Liverpool have joined Barcelona and host of clubs in pursuit of teenager Camavinga.

Manchester United and Arsenal have already been alerted by the 17-year-old’s form since becoming a regular in Ligue 1.

Barca are considering bolstering their midfield with the €50m-rated Camavinga but could face competition for his signature from Liverpool.

Camavinga has emerged this season as one of the hottest teenage transfer properties in Europe this season.