Achraf Hakimi insists there ‘has been no change’ to his situation at Real Madrid amid reports linking him with a move away from the club.

The Moroccan international arrived at Borussia Dortmund on a two-year long loan deal in the summer of 2018 and is now entering the final months of that arrangement.

It is unclear where his future lies – he appears to have regular game-time at Dortmund while at Madrid, his preferred position of right-back is already occupied by Dani Carvajal with Alvaro Odriozola and Nacho Fernandez also in that position.

Chelsea, Tottenham and Arsenal all want to sign the player, according to a report in El Mundo Deportivo, who also claim that Paris Saint-Germain, Juventus and Bayern Munich are also interested with Dortmund also eyeing a permanent deal.

“My contract with Real Madrid? My agent deals with that it, I’m not very aware of that – I don’t know how much I have left,” Achraf told Cadena Ser.

“It is still the same contract that I signed in 2017, there has been no change.”

Last month, a report in Diario AS said Madrid want Achraf back at the club for next season but are aware they would not be able to guarantee him first-team football and were in a dilemma over his future.

“Real Madrid are the club I call home,” Hakimi told Telefoot, in quotes cited by Diario AS.

“I’ve really enjoyed my time there and played lots of games there. If Real Madrid want me to go back, I’ll go back. And if not, I will need to write the next chapter at another great club.”

The player told Cadena Ser in February: “Returning to Madrid is what my contract says, but anything can happen in June and we will see what happens in the summer.

“In my head, I have to want to be playing and keep growing where I am given first-team opportunities, like has been the case here in Germany.

“I want to showcase the player that I am and do what I enjoy doing the most – playing football.”

In January, Marca reported Bayern Munich have approached Madrid over the player and it is said that the German champions valued his versatility.

Hakimi, 21, has already amassed 22 caps for Morocco, including all three group matches at the 2018 World Cup. 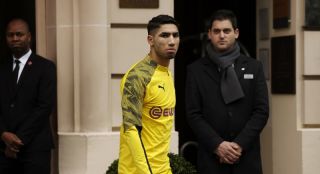 The full-back had represented the Bundesliga title challengers 33 times last season and was largely very impressive before being ruled out for the remainder of the campaign in March.

He has once again return to action this season and has appeared in 36 games since the summer including a starring performance in November’s 3-2 win over Inter in the Champions League – where he netted twice.