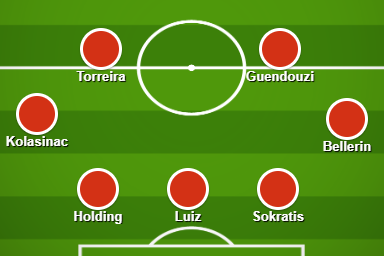 After fielding a back-three against Vitoria for the first time since May, Unai Emery is expected to stick with the same system for Arsenal’s trip to Leicester City.

The Gunners lined up with a new-look defence in the Europa League on Wednesday having used the formation to success last season.

The formation is one which could get the best out of David Luiz, who thrived in a back-three at Chelsea, while Rob Holding is a natural left-sided centre-back.

Ahead of the central pair, both Hector Bellerin and Sead Kolasinac are at their most effective when deployed as wing-backs.

After being stripped of the captaincy, Granit Xhaka is again unlikely to play after being left out of matchday squads since October 27. His return is now expected to be after the upcoming international break after two games for Switzerland under his belt.

Further forward Mesut Ozil should be restored as the No10 after missing Wednesday’s match in Portugal, while Alexandre Lacazette and Pierre-Emerick Aubameyang are set to lead the line.