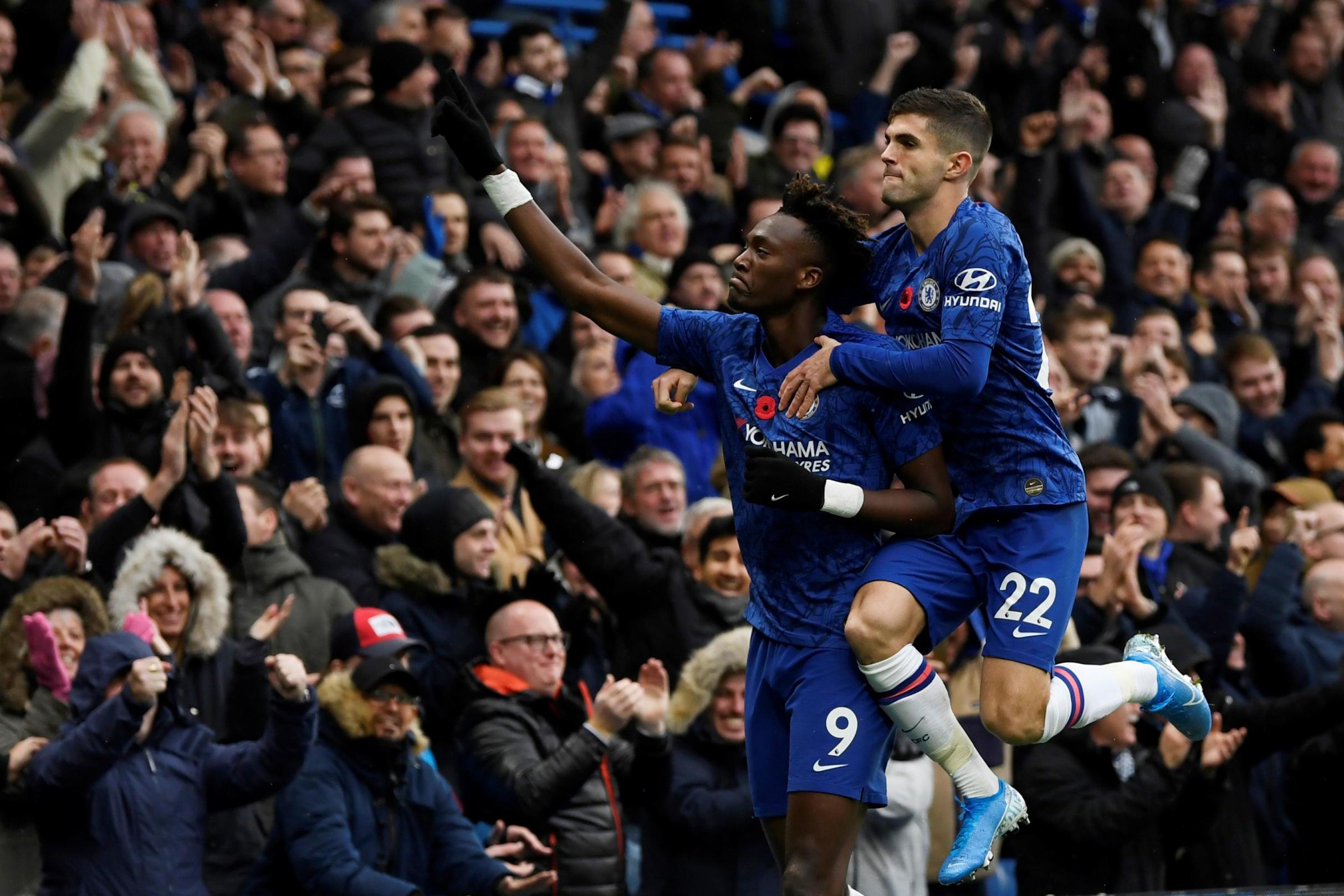 Tammy Abraham and Christian Pulisic both notched for the Blues in a rainy lunchtime London derby to help Lampard avoid falling victim to the dreaded manager of the month curse in his team’s final match before the final international break of 2019.

The result means that Chelsea temporarily rise above Leicester and Manchester City into second place – five points behind leaders Liverpool – before that duo face Arsenal and Liverpool respectively.

Chelsea made three changes from the memorable eight-goal Champions League draw against Ajax, with Reece James handed his first Premier League start in place of Cesar Azpilicueta, N’Golo Kante deputising for the suspended Jorginho on his first outing since early October and Emerson coming in for Marcos Alonso at left-back.

Mason Mount was declared fit to start despite being forced off with an ankle injury in midweek.

Palace boss Roy Hodgson made one alteration to the team beaten by Leicester in his 300th Premier League match as a manager, restoring the fit-again Andros Townsend to the starting XI at the expense of Jeffrey Schlupp.

An energetic Chelsea were immediately on the front foot and zipping the ball around with pace, yet Christian Pulisic was unable to lift the ball over Palace goalkeeper Vicente Guaita from close range after some dizzying quick feet from the American international.

Willian fizzed a curling free-kick narrowly wide of the post and also received the first of a flurry of first-half yellow cards shown by referee Mike Dean, whose effect on the pace of the game evidently frustrated Frank Lampard.

Palace – who lost Joel Ward to a hamstring injury before the interval – were defending stoutly despite giving up 68% of the possession, but failed to pose much of a threat on the break and did not have a shot on goal in a sleepy first half.

Their only sniff came after a woeful roll-out from Kepa Arrizabalaga put Kurt Zouma in a spot of bother, but the French defender was able to win a free-kick under pressure from Wilfried Zaha.

Guaita was called into action again on the stroke of half-time,pushing away James’ powerful low cross before Cahill made a superb last-ditch block to thwart Willian.

Chelsea were rightly refused a penalty straight after the restart after a miscontrolled ball from Pulisic skipped up onto the hand of Martin Kelly, but they broke the deadlock shortly afterwards.

Kovacic drifted across and played the ball to Willian, who teed up Abraham with a lovely flick.

One-on-one with Guaita, the England striker then opened up his body and calmly picked out the far corner with a controlled low effort from close range.

Chelsea took confidence from that opening goal and Pulisic saw a rasping effort tipped over and Abraham blazed wide.

Palace began to wake up thereafter as Zaha looked to test young James, but there best chance fell to centre-back James Tomkins, who steered his header from a free-kick wide after being left unmarked in the box.

The hosts wrapped up victory with just over 10 minutes left, with Christian Pulisic nodding in after Willian’s shot had looped up off Cahill.

Substitute McCarthy stung the hands of Kepa before Chelsea pressed for a late third, with Callum Hudson-Odoi firing wide on the run and Michy Batshuayi seeing a shot diverted over the bar.