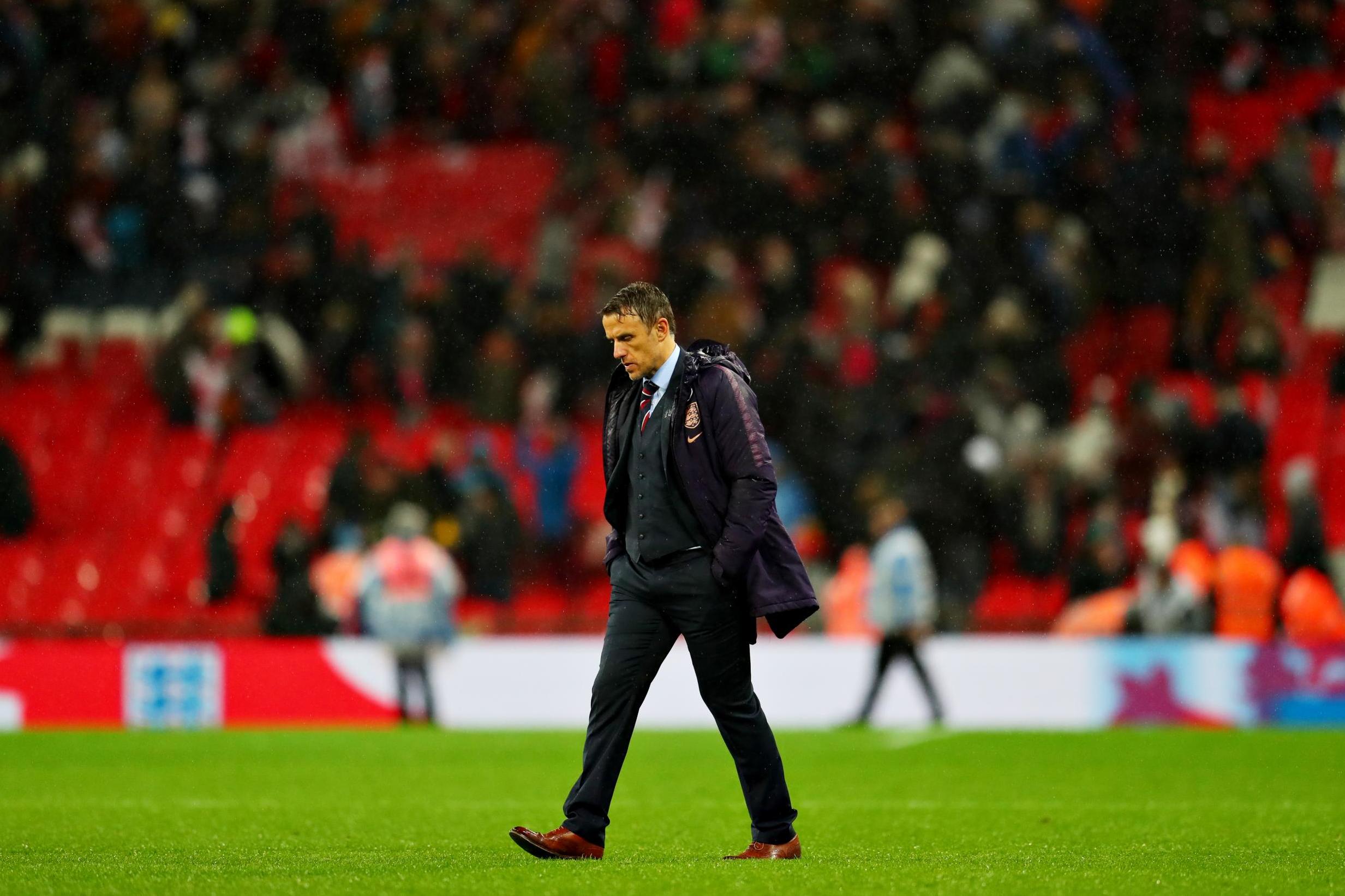 The FA will consider Phil Neville’s position as England Women’s manager if the Lionesses fail to beat the Czech Republic on Tuesday, after he was warned to tone down his positive rhetoric.

Ahead of their final fixture of 2019, Neville’s side have won just once in seven matches since the World Cup quarter-final victory over Norway in June, with Saturday’s 2-1 defeat to ­Germany — in front of a record crowd for an England Women’s game of 77,768 at Wembley — their latest reverse.

Neville has retained the backing of the FA and there have so far been no internal conversations about the 42-year-old’s job, with the message remaining ‘business as usual’.

But sources admit the pressure on Neville will inevitably mount if England fail to beat the Czechs, who are ranked a lowly 28th in the world, in Tuesday’s friendly in Ceske Budejovice, with FA chiefs likely to discuss his position in the event of another failure.

Sacking Neville, who has a contract until after the European Championship on home soil in 2021, remains an extreme option, however, particularly with planning well under way for the former Manchester United defender to lead England at the SheBelieves Cup in March and Team GB at the Olympics.

Neville has pointedly tried to improve England’s style by implementing a modern passing game, but they finished fourth in France this summer, having won the third-place play-off in Canada four years earlier under his predecessor, Mark Sampson.

Speaking yesterday, Neville insisted: “The support I’ve had [from the FA] from day one has been unwavering. They know the plan of where we’re going, they know what we have to do together, they know what’s required from now until SheBelieves and then to the April camp, and then obviously on to the Olympics.

“It’s up to myself as a manager and up to this group of players to start performing and delivering, and repaying the faith that they’re showing in us.”

The manager’s public rhetoric has remained overwhelmingly positive during England’s post-tournament slump and he has been warned by FA chiefs that his messages, which are aimed primarily at his players rather than the public, have often given the wrong impression.

His assertion in September that ­England “should thank their lucky stars” he is in charge because he has “a vision no one else does” was viewed as arrogant by some at the FA, while he claimed the performances in the 2-1 defeat to Brazil and fortuitous 1-0 win over Portugal were “outstanding” last month.

Neville pointedly struck a humbler note at Monday’s pre-match briefing, saying: “I’ve not performed as a manager, the players haven’t performed as players and we take full responsibility for that. And ultimately the buck stops with me. I need to be better as a manager to get more out of these players.”

Neville’s hopes of turning the tide tonight were dealt a blow yesterday morning, when Alex Greenwood (ankle) and Jodie Taylor (back) withdrew from the squad, along with rested pair Ellen White and Steph Houghton. Captain Houghton and striker White, who finished joint top-scorer at the World Cup with six goals, have been among Neville’s most important players since his appointment in January 2018.