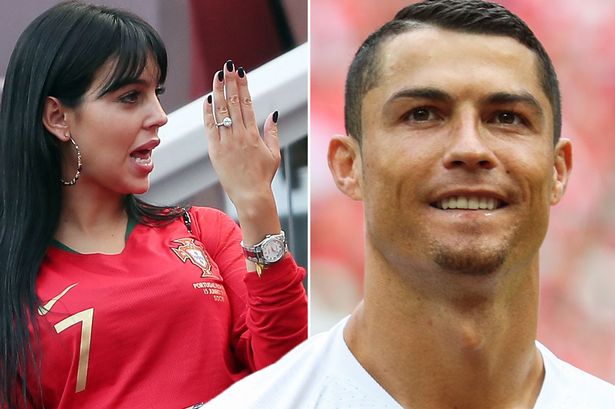 The 26-year-old uploaded a snap wearing a huge dazzling ring and one hand over her stomach.

The model has previously denied the couple are engaged but her latest Instagram post seems to suggest otherwise.

In the first snap, the Spaniard is in a lift and has her hand over her stomach alongside the caption: “Buenos Dias.”

And the second on her Instagram story shared to her 18.2million followers was a close-up of the enormous ring on her wedding ring finger alongside a Chanel handbag.

Ronaldo, 35, spent the lockdown in his native Madeira but is now back in Italy ready for action.

But focus is also on his partner who appeared to hint at pregnancy again just four days ago with a photo captioned: “Baby girl.”

Serie A bosses are hopeful of a return to the pitch on June 13.

And Ronaldo was seen arriving at Juventus’s training base in a black Jeep Grand Cherokee on Tuesday to report back for duty.

He did so rocking a new hairstyle, after Rodriguez spent the day “pampering” him and practicing her hairdressing skills last month.

Rodriguez got her electric razor out at the start of April while they were still in Madeira and ran it up the back of the Juventus star’s head.

He did his famous “Siiiiiu” goal celebration yell and gave a thumbs-up as Georgina insisted: “Just relax.”

Italy’s hairdressers re-opened on Monday after a ten-week lockdown – but Cristiano obviously won’t be on the customer list anytime soon if the couple’s social media posts are anything to go by.
with braids (this model knows how to stay still).”

Ronaldo also shared a picture of himself and his new barnet, giving two thumbs up at the Juventus training ground.