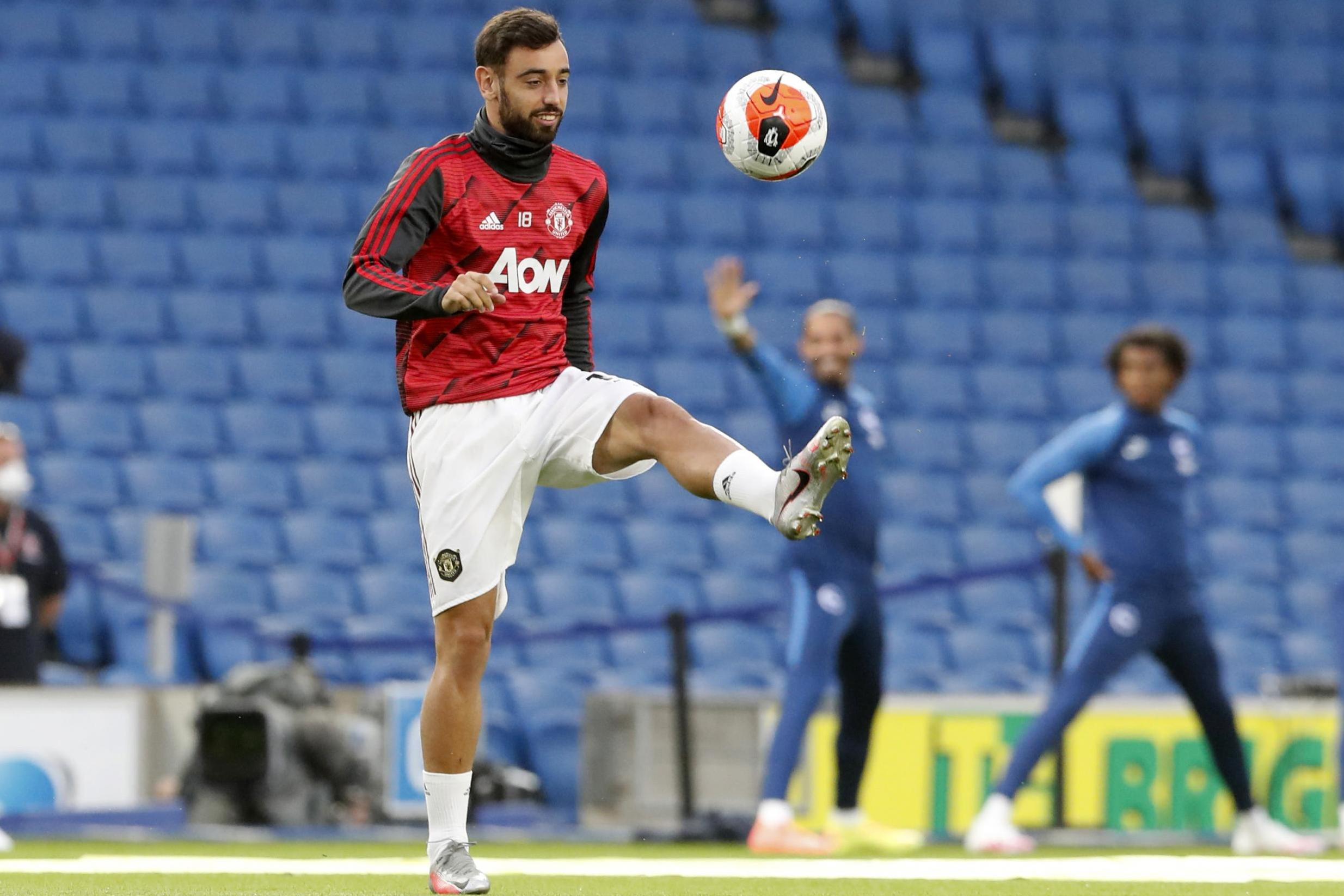 Victory for Ole Gunnar Solskjaer’s side tonight will them leapfrog Wolves into fifth place in the Premier League table.

With rivals Man City facing a suspension from European, finishing fifth could guarantee United a place in next season’s Champions League.

With kick-off at 8:15pm BST, James Robson will bring you all the action and analysis tonight.

4mins: A dangerous looking cross from Fernandes seems destined to find Martial in the six-yard box – but Duffy clears.

1min: Right from the start we can see that understanding between Martial and Rashford with some nice link up play.
It was fascinating to hear Solskjaer trying to keep them on their toes though beforehand.

He insists he will continue to look for a to class striker to provide competition for places.

KICK OFF! We’re under way.

Not long to go until kick-off now…

The teams are out at the Amex!

So, Solskjaer reverts to a strong starting XI – and by the looks of it, he is going to try and take the game to Brighton in the same manner by which the Red Devils brushed aside Sheffield United 3-0.

The United squad has arrived at the Amex, and we’re expected confirmed lineups in just under 20 minutes…

Solskjaer has no fresh injury concerns. The Norwegian made eight changes for Saturday’s FA Cup quarter-final win at Norwich and looks set to make a similar number of alterations after the match went to extra-time.

Axel Tuanzebe and Phil Jones remain absent for United, who will surely not call upon Angel Gomes after Solskjaer said the teenage midfielder looks set to leave when his contract expires on Tuesday.

The Seagulls could be without Adam Webster. The defender was forced off in last week’s 0-0 draw with Leicester due to a hamstring problem and will be assessed before the United fixture.

Tariq Lamptey impressed on his Seagulls debut in the same game and is fit to feature despite requiring stitches in a facial wound suffered during the match.

“We just have to focus on one game at a time, win this one so we can go into the next one feeling more confident.

“But also push on because complacency, that kicks you somewhere you don’t want to get kicked in football, and any game is a difficult one.”

Ole Gunnar Solskjaer believes Anthony Martial, Marcus Rashford and Mason Greenwood can still be “so much better”, with the United manager open to further strengthening his attack.

The trio have stepped up after Solskjaer allowed Alexis Sanchez and Romelu Lukaku to depart for Inter Milan last summer, but the former striker’s happiness comes with a hunger for them to kick on again.

“Romelu’s a very good goalscorer – he’ll score goals in any team that he plays in,” the United boss said. “It was time now for him to move on and pursue other dreams.

“For us, as a group, it was time to allow our forwards to feel that confidence and feel that almost demand of playing and being demanded that you play every game, two, three, four games, five, six, seven games on the bounce and perform.

“Because in the end that’s how you get to another level, a different level. I think all three that we have talked about have had a good development this season – but they can be so much better.

“All three, I’m still waiting to see them blossom because there’s parts of their game that they still need to improve on.”

So, with kick-off scheduled for 8:15pm, we will have team news at around 7:15pm this evening.

Expect United to revert to a strong starting XI…

United have secured promising results since the season restarted: Ole Gunnar Solskjaer’s side drew 1-1 at Tottenham before crushing Sheffield United 3-0 to keep their Premier League campaign on track, and then picked up a 2-1 FA Cup win at Norwich despite a much-changed side putting in a below-par performance.

However, that is exactly the type of result that this United side needs to start getting if they are to seriously challenge for major honours next season – and the Red Devils need a win on the south coast.

A resurgent Wolves have leapfrogged United into fifth – a position which will ensure Champions League qualification if Man City’s FFP Uefa ban stands – and Solskjaer’s men must win at Brighton to retake control of the race.

Birmingham wonderkid Jude Bellingham could play a key role in Manchester United’s negotiations for Jadon Sancho, according to Sky Sports.

Bellingham, 17, is set to choose between Dortmund and Manchester United in the next few weeks. With United pushing hard to sign Sancho, it raises the possibility of them allowing Dortmund a free run at Bellingham as part of negotiations over Sancho.

Officials at Old Trafford feel Dortmund’s asking price of more than £100m for Sancho does not fairly reflect the economic climate.

Manchester United are adamant they won’t part with more than £70million to land Jadon Sancho this summer.

Sancho is keen to join United but the clubs are at odds over his valuation in the current economic climate.

Dortmund remain adamant that Sancho will not be sold below their asking price of more than £100m.

How to watch Brighton vs Manchester United

TV channel: The match will be shown live on Sky Sports’ Premier League and Main Event channels, and is available via Now TV with a day pass for £9.99, or a three-month pass on offer for £25.

How we expect Manchester United to line up

The England international is yet to score since the restart after recovering from a back injury.

He was guilty of missing two glorious chances in the 3-0 win against Sheffield United last week – but still set up two of the goals in Anthony Martial’s hat-trick.

That has been enough to encourage Solskjaer – but the United manager is convinced Rashford will soon add to the 22 goals he’s scored for club and country this season.

“Of course Marcus has been out for a while, but I think he’s looked sharp,” said Solskjaer. “He came on and looked sharp against Norwich.

“Against Sheffield United he missed one or two chances, but the goals he created are what we’re focusing on and he’s on his way to the best season ever.

“I’m looking forward to him getting more minutes and he’ll definitely score a goal soon.”

Rashford is likely to start alongside Martial and Mason Greenwood when United face Brighton tonight.

Paul Pogba should also get his second start since recovering from an ankle operation.

United are on 14-game unbeaten run, but go into that game in sixth place and five points behind Chelsea in fourth.

Solskjaer added: “I think there are many teams in that battle for third fourth – Leicester, Chelsea, us, Wolves doing really well. Tottenham, Arsenal and Sheffield United want to put a run together and put a challenge in there.

“It’s exciting for fans. We’ve been waiting for football that matters, we want fans in the stadiums, but we can sit back and watch exciting games.

“The players are working really hard and want to do as well as they can and for me as a team we’re trying to implement our ideas. Talk about 14 games – we can talk about the next one, go into the next game knowing you’ve won the previous game and it’s a good place to be in.”

Solskjaer added: “I think every year you’re in the Champions League is a great experience. For the players it’s a step forward. For us it’s what we’re striving to do – winning trophies and we need to focus on one game at a time.

“There are so many teams that want that place. We can’t get distracted about looking too far ahead.”

How to watch Brighton vs Manchester United

TV channel: The match will be shown live on Sky Sports’ Premier League and Main Event channels, and is available via Now TV with a day pass for £9.99, or a three-month pass on offer for £25.

Brighton have picked up two excellent results since the restart to boost their survival hopes, beating Arsenal at home before securing a point at Leicester.

United will have to be wary, particularly given the manner in which the Seagulls fought back from behind to beat the Gunners – but Solskjaer will be confident of a win if his side take the game to their opponents as they did to Sheffield United.

The two sides have met five times in the Premier League, with United winning three times and Brighton twice.

The Red Devils beat the Seagulls 3-1 at Old Trafford earlier this season, but the teams’ last meeting at the Amex – back in August 2018 – ended 3-2 to Brighton.