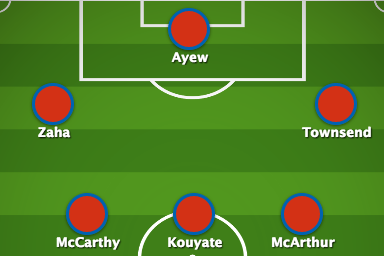 Roy Hodgson has confirmed that Patrick van Aanholt will require an operation and as yet does not have any date for a potential return to action as Crystal Palace prepare to face Wolves.

The Dutch left-back was stretchered off after dislocating his shoulder against Manchester United on Thursday night and faces a long stretch on the sidelines.

Palace youngster Tyrick Mitchell, who came on to replace Van Aanholt at Selhurst Park, could be in line for a full Premier League debut against Wolves on Monday night, though Hodgson could ask midfielder Jairo Riedewald to fill in as he did earlier in the season.

“[His shoulder] is dislocated and he’s had it assessed,” Hodgson said of Van Aanholt. “He’ll need an operation and that will keep him out for the rest of the season.

“We’ll have to see how it goes in the pre-season. There’s no timescale as yet for when he’s back.”

The Eagles, on a run of six straight defeats which don’t quite reflect their performances, could also be without captain Luka Milivojevic for another tough test against Wolves after he picked up a knee problem in training.

“Luka Milivojevic has been having problems with his knee so that’s something we’ll have to assess tomorrow [Monday],” said Hodgson.

“He joined the first part of training today but felt the knee. We’ll assess him tomorrow.”