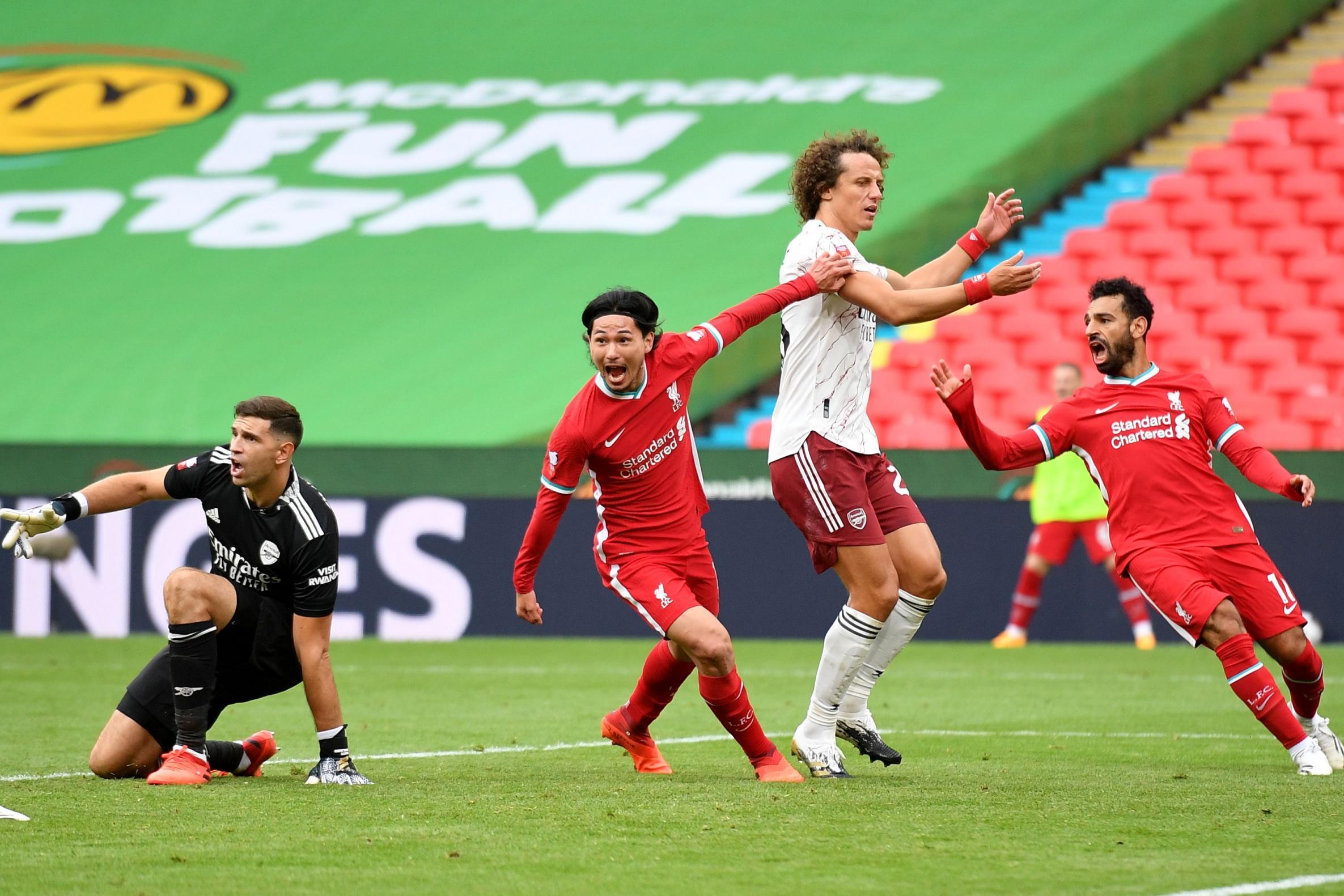 Less than a month after the 2019/20 domestic season drew to a close, the curtain raises on a new campaign today as Arsenal and Liverpool collide in the Community Shield at Wembley Stadium.

Premier League champions Liverpool are here for the second successive year following a 2019 defeat by Man City, while Mikel Arteta’s Gunners have less than a week of training under their belts.

Liverpool started brightly, but Pierre-Emerick Aubayemang’s superb opening goal gave Arsenal a deserved 1-0 lead by half-time – and it could have been more had Eddie Nketiah taken his chances.

Takumi Minamino levelled after the break, and neither side could find a winner in normal time – which meant a penalty shootout…

Five out of five! Deliciously wrapped home and the Gunners have done it.

The youngster Curtis Davies keeps Liverpool in it. I don’t need to tell you who’s got the chance to win it for Arsenal…

A good afternoon for Minamino continues – he crashes home.

Arsenal in front. Cedric slots his into the corner.

Missed it! That might be Rhian Brewster’s first kick and he’s clipped the bar!

Cool as you like. Maitland-Niles strolls up and eyeballs Alisson before clipping into the corner.

Another corker, whipped home by Fabinho.

Mo Salah steps up… and sends Martinez the wrong way.

Simon Collings is at Wembley

Arteta gets the whole Arsenal squad, including subs, into a tight huddle as he gives a rallying speech. Time for someone to be a hero.

90+2 mins: Rhian Brewster is on for Gini Wijnaldum, presumably to take a penalty.

90 mins: Three minutes to be added…

86 mins: Huge chance! The substitutes have injected a bit of life into Arsenal and Joe Willock could win it with a header from ten yards but he nods wide.

82 mins: Arsenal look tired, and a triple change is made as Reiss Nelson, Joe Willock and Sad Kolasinac come on fro Tierney, Saka and Nketiah.

81 mins: Another big save from Martinez!

Mane chests past the desperate challenge of Tierney and is in but takes a slightly heavy touch and Martinez is again out to deny him at his feet.

79 mins: A reminder that if this does finish 1-1, it’ll be straight to penalties, no extra time.

It’s been a poor Liverpool performance so far but that goal could completely change things. The champions need to build on this momentum after finally piercing an obstinate Arsenal backline that had comfortably dealt with everything thrown at it up – a flurry of crosses, mainly – until that point.

And what an important moment that could prove to be for Minamino, who has endured a frustrating start at Anfield but has had some rather unfortunate near misses in front of goal before now.

​It has been coming! A little bit of good fortune about the way the ball ricochets into Minamino’s path but he makes no mistake in tucking home his first goal for the club.

Arsenal vs Liverpool is scheduled for a 4:30pm BST kick-off this afternoon.

The match will be played behind closed doors at Wembley with no fans due to be present due to government guidelines regarding coronavirus.

TV channel: The match will be televised live on BT Sport 1 and BT Sport Ultimate, with coverage starting from 4pm.

Arsenal’s FA Cup triumph at the beginning of August further cemented their status as Wembley specialists. The Gunners also beat Liverpool in the last meeting between the two sides, with blunders from Van Dijk and Alisson Becker ending Liverpool’s hopes of equalling or surpassing Manchester City’s record Premier League points haul in July.

The Community Shield’s reputation as a glorified friendly rather than an ultra-competitive final has only increased over recent years, and that is likely to be the case more than ever here with both managers eager not to overburden their key stars with a busy campaign following hot on the heels of the last.

Still, it should be an enjoyable occasion nevertheless, with Liverpool just shading it to claim their first success in this fixture since 2006, when Peter Crouch and John Arne Riise both netted in a 2-1 win over Chelsea.

These two giants of English football have met 229 times across all competitions over the years, with Liverpool boasting 10 more wins, 89 to 79.

There have been 61 draws.

Although they lost at the Emirates in July, Klopp’s men did brush aside Arsenal 3-1 at Anfield last August before also triumphing on penalties two months later following a 10-goal Carabao Cup fourth-round thriller on Merseyside.