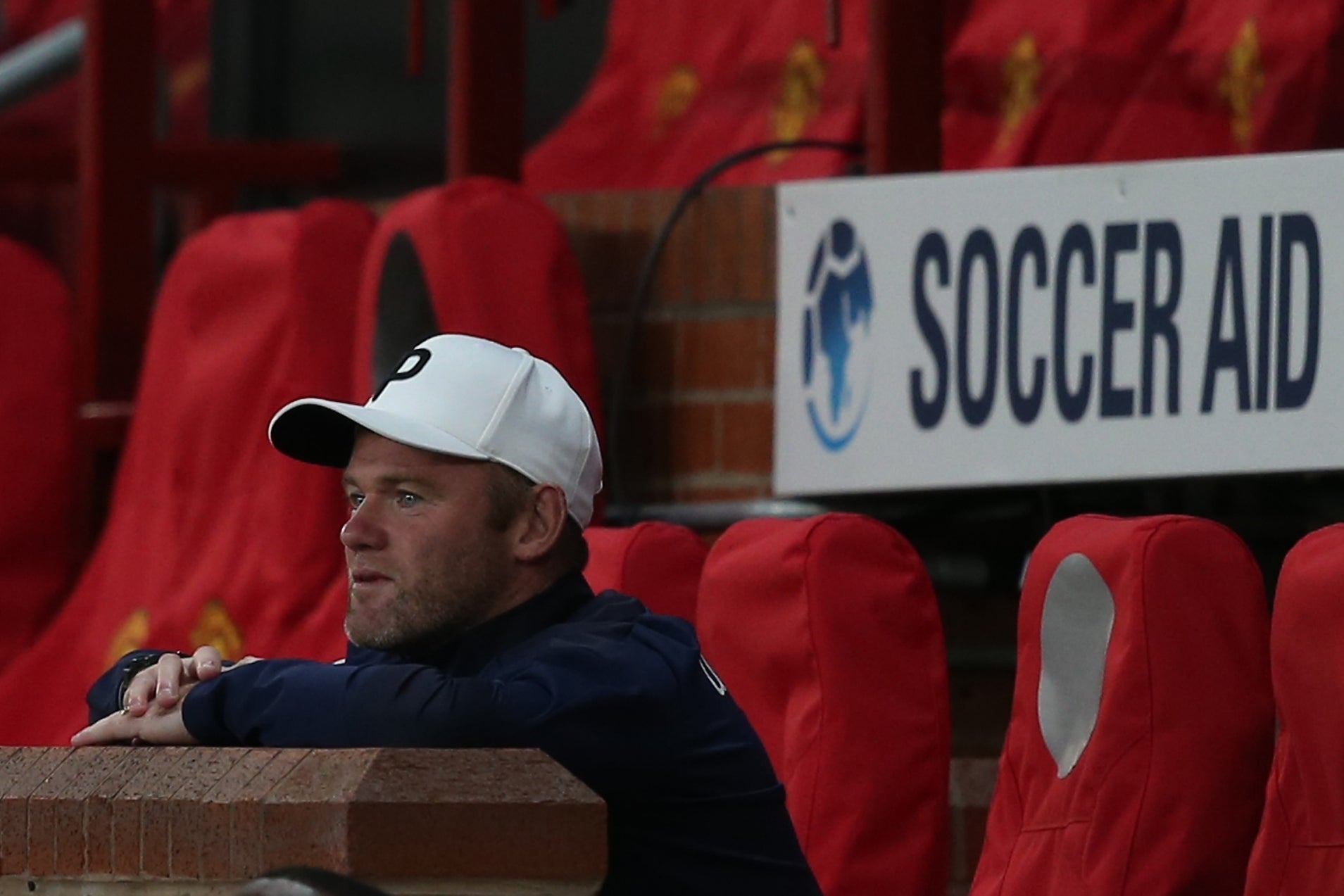 Soccer Aid returns tonight, originally rescheduled from June due to the coronavirus pandemic, as footballers and celebrities raise money for Unicef.

It’s England vs Rest of the World at Old Trafford, with Wayne Rooney returning to his old stomping ground and taking his place in the manager’s dugout to take charge of the host team.

Harry Redknapp will take charge of the visitors, and has the likes of Patrice Evra, Darren Fletcher, Robbie Keane and Claude Makelele at his disposal.

HALF-TIME: England 0-0 Rest of the World

That’s the first 45 done. Not a lot from England, with the opponents looking the most likely.

46min: Evra has just sent Mack to the shops with an outrageous nutmeg!

That was, genuinely, something very special. He really does love this game.

44min: Terry goes through Kem with a tough, though fair, challenge. The Love Island star has impressed on the right wing.

40min: Right so, Pizzorno has had to go off as ROW didn’t have at least two female players on the team, which is a rule.

Someone could be in trouble.

For ROW, Love Island’s Kem is now on.

34min: These England subs have worked – well done Rooney – with Filly very lively on the wing.

John Terry just ran the full length on the pitch, only to slip at the crucial moment.

The full-back shapes to cross but disguises a low effort towards the near post, which spins narrowly wide.

29min: Another sub for England, as Filly replaces Jones.

25min: Half a chance for ROW from the corner, but Kennedy’s snap shot is hacked clear.

We’ve had a drinks break, which is fair enough.

Mark Wright and John Terry exchanging words on the way back onto the pitch.

21min: Best chance of the game so far and it falls to Lynch.

Evra is again on the prowl further back and spots the freestyler’s run into the area and finds him, but Wes Brown matches him stride for stride to block the effort.

19min: Essien has not got his shooting boots on today.

The impressive Lynch has the left wing all to himself before cutting back for the Chelsea legend, who’s first-time effort is very high and very wide.

17min: Grimes pounces on a defensive error as the ball fizzes into the area, but James is off his line quickly to smother.

Chunkz is coming on, rubbing his palms together in anticipation.

11min: England break through Wright as Davis runs through treacle to catch up with play.

A ball is whipped in well, low and from the left flank, but ROW clear.

9min: It’s fair to say that Tom Davis is more Berbatov than Mbappe.

6min: First half-chance of the game and it falls to ROW.

Evra again involved, working it on his favoured left, before rolling the ball to Lynch for a pop, but England close down the ball well.

2min: Evra, who is starting at right-back, does well to force through the midfield to force a free kick around 30 yards out.

Essien steps over the ball… but his effort is, quite frankly, woeful.

We’re under way after the players and match officials take a knee.

The teams are out

But first we are treated to a poem from the great Tony Walsh.

TV channel: The match will be broadcast on ITV, with coverage starting at 6.30pm.

Flying Eagles Have No Reason To Fail At AAG In Morocco