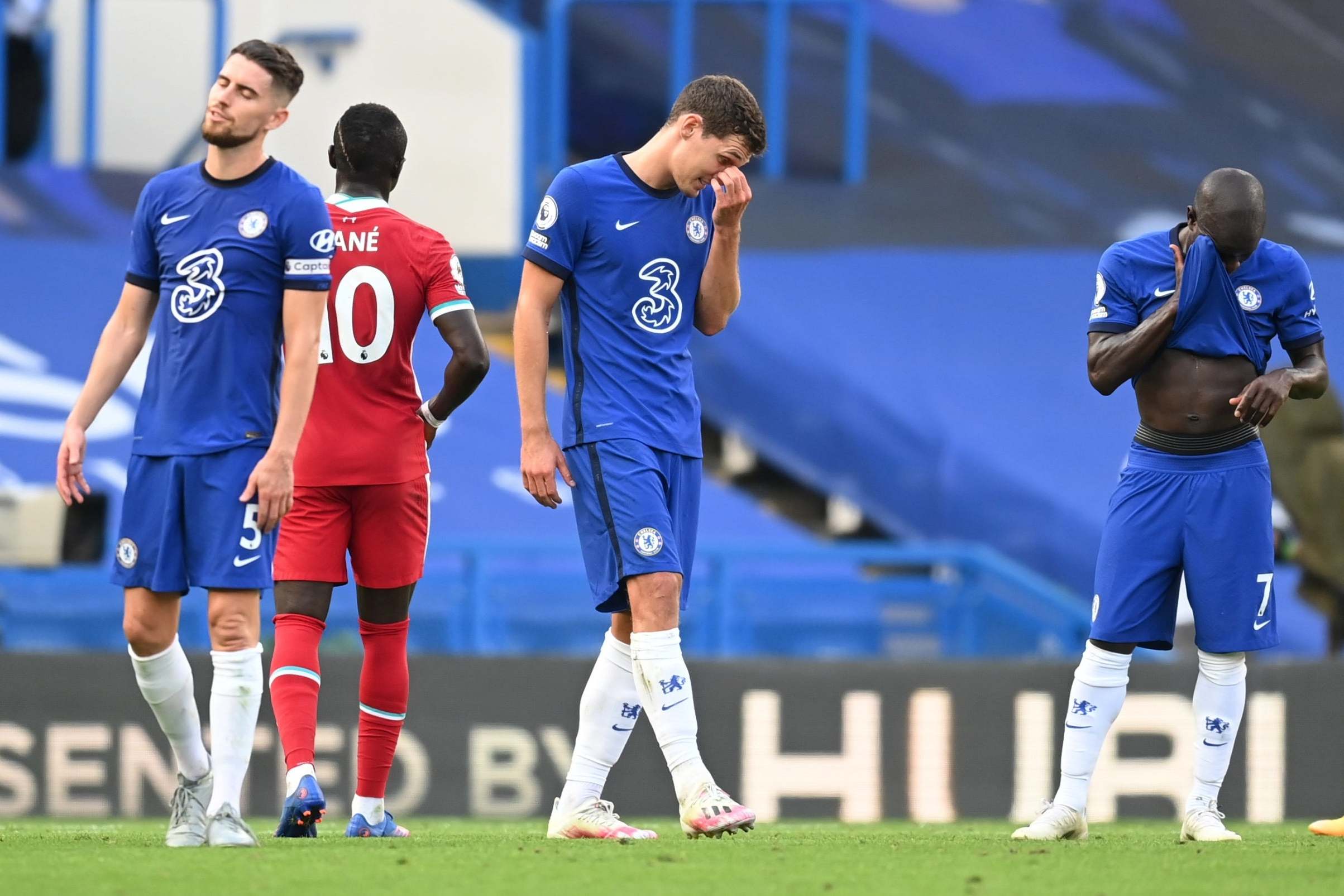 Welcome to the Evening Standard’s live coverage of the Premier League champions’ first big test of the season at Stamford Bridge.

A few eyebrow-raising defensive mishaps almost saw the Reds slip up at home to Leeds last time out, while Chelsea – fresh from spending north of £200m – looked suspect at Brighton.

Victory today for either team will be a huge statement in the title race.

Follow along with Jack Rosser, David Lynch and Malik Ouzia below!

46 mins: The word from the Liverpool camp is that Jordan Henderson has a tight groin.

Chelsea are going to bring on Fikayo Tomori at the break after that red card, with Kai Havertz the man sacrificed.

Thiago Alcantara is indeed on at the interval, too. Jordan Henderson is the man making way, so you’d think it might be injury-related.

Thiago Alcantara has been going through some rigorous warm-ups at half-time. Looks like an early debut.

We’ve seen some stinkers from VAR this weekend but that looks to be an example of the technology genuinely helping referees. The yellow card first produced by Paul Tierney looked lenient and he is right to upgrade it to a red on review. Chelsea were already struggling and that isn’t going to make their task any easier.

That is a huge blow for Chelsea after such an impressive first half. The back four and midfielders have been holding Liverpool at bay superbly so far. That task is now going to be a whole lot harder.

Yep, thought so. Christensen’s a goner. Not sure Mane would’ve got there ahead of Kepa but it was a challenge that made sure he didn’t without any attempt to play the ball.

44 mins: My, oh my. Jordan Henderson pings a terrific ball over the top and Sadio Mane is onto it. Christensen’s caught the wrong side and just rugby tackles him as Kepa flies out to clear.

For now, the colour of the card is yellow but VAR is taking a look…

Chelsea have a free-kick in a great position on the left and he whips a terrific ball across the face of goal but hardly anyone in blue has bothered attacking it.

Lampard will be pleased with how things are going so far. Liverpool’s press is tireless and suffocating but they’re working around it well from the back, while Werner is proving a threat.

They’re restricting Liverpool going forward rather well. Werner and Havertz could perhaps do with a bit more support when they get the chance to go forward.

Mo Salah kills the ball brilliantly as Liverpool recycle from a half-cleared corner and he drills across the face of goal but no one can apply the finish.

32 mins: Chance! Timo Werner pops up in the middle and tries to play Kante in behind but it bounces back to him off Fabinho and he sets off. This time he’s away from his man and tries to steer into the bottom corner but his shot drifts just wide.

31 mins: Chelsea look pretty solid at the back at the moment, though they are struggling to get any sort of foothold going the other way.

Mo Salah tries to unlock the door with a dinked pass in behind but Christensen is alert to the danger again.

26 mins: Thiago Alcantara is out for a little job and shares a hug with Spanish teammate Cesar Azpilicueta,

Chelsea are having to work hard but they’re doing well so far. Werner is starting to find the pockets of space and getting the chance to run at Fabinho. The makeshift Liverpool defender is handling him well so far but given a few more goes you’d fancy Werner, with all his pace, to get the better of Fabinho.

You’d imagine Jurgen Klopp is pretty happy with the way things are going for his team so far at Stamford Bridge.

Liverpool have dominated possession since the first whistle sounded and created a few half chances, while Chelsea are struggling to string any meaningful moves together. Still, the visitors must be careful not to switch off after what has been a comfortable opening 15 minutes – Timo Werner’s pace means a it will only take one incisive pass for Frank Lampard’s men to get in on goal.

20 mins: Excellent from Fabinho. Kovacic makes a great driving run through midfield and eventually Werner is released on the left. He drives inside, has Fabinho one-on-one but the Brazilian stands his ground and makes a great tackle.

17 mins: Chelsea’s first real attack of note. Werner and Havertz exchange passes nicely before the latter picks out Mount in the centre and he in turn lays wide to Kante.

The Frenchman should probably take a touch and hit it but he delays and os eventually crowded out.

14 mins: Oh Kepa. Frank Lampard will be having kittens as the Spaniard comes haring out to the far corner of the box but is beaten to the ball on the byline by Salah.

The Egyptian squares for Firmino, who would have a tap in were it not for a brilliant bit of last ditch defending by Christensen.

TV channel: The match will be televised on Sky Sports Main Event and Sky Sports Premier League, with coverage starting from 4pm.

The match is also available to watch through Now TV. Prices and subscription details can be found here.