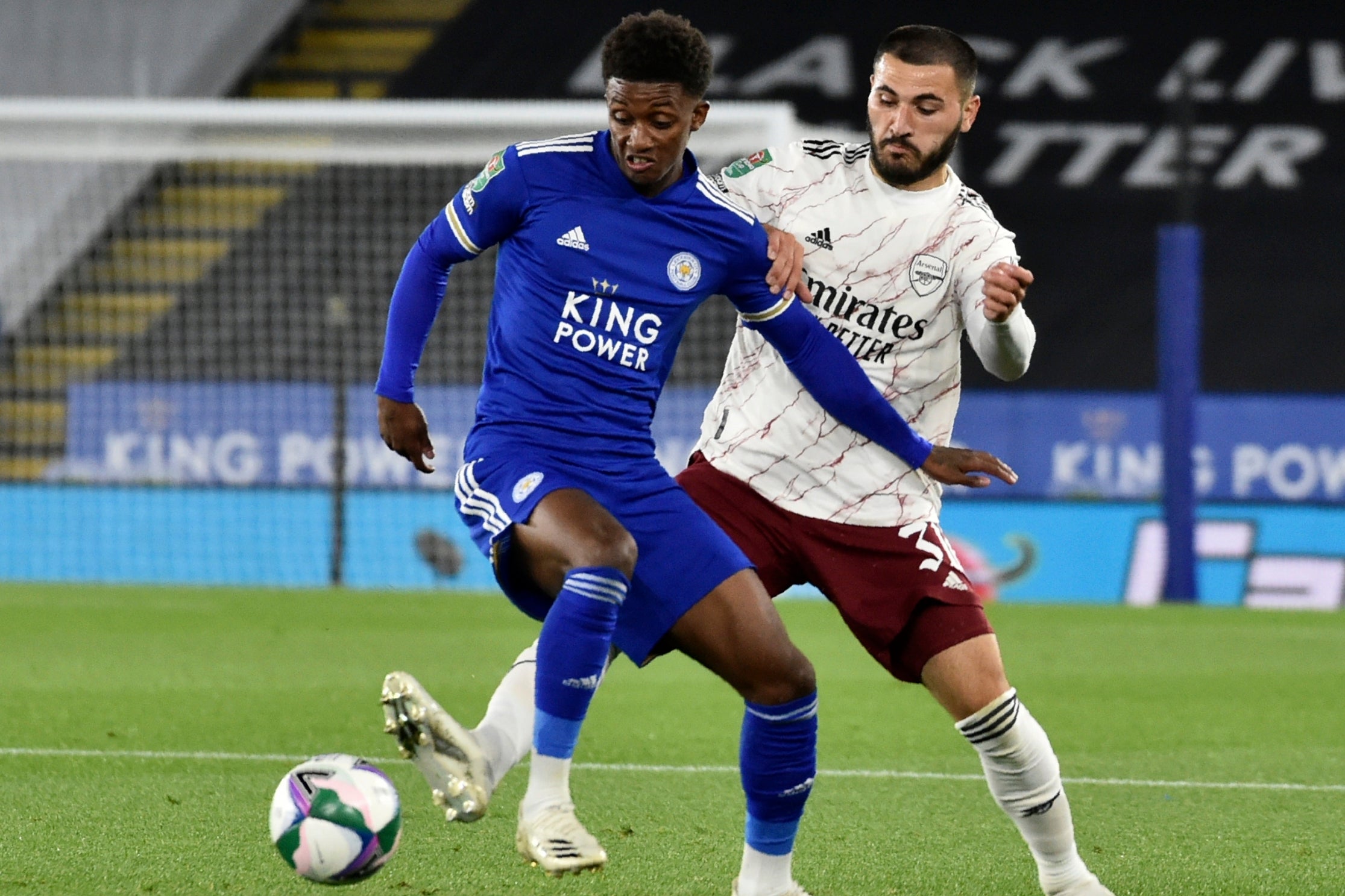 The Gunners pay a visit to the King Power Stadium for the headline clash on a busy night of Carabao Cup third-round action.

Mikel Arteta’s men are full of confidence after starting the new Premier League season with back-to-back wins over Fulham and West Ham.

They now face a Leicester side that have also begun the 2020-21 campaign in impressive fashion, scoring seven times in total in successive victories against West Brom and Burnley.

42 mins: Leicester coming alive at the end of the first half. Choudhury wins the ball back high up, allowing Albrighton to cross for Maddison who heads over.

39 mins: A huge let off for Arsenal! Maddison slides through four Gunners players, drops the shoulder and shapes one around Leno only to see it come back off the post and the keeper gather. A lovely solo effort.

37 mins: We’re playing again and Luiz has been given the all clear to carry on.

35 mins: Slight scare here as Leno leaps to claim a cross but wipes out Luiz in the process. The Arsenal defender hits the deck immediately and, lying flat on his back, is receiving treatment.

31 mins: Nelson is given some instruction from the bench as to where to stand at the corner and the flick on lands at his feet. The forward can’t get his effort on target however.

29 mins: Another good chance for the Gunners as Nelson looks to whip another effort from the left hand side but again he’s denied by Ward who palms away.

27 mins: Arsenal players screaming for a penalty after Saka was brought down by Amartey in the Leicester box but they’re getting nothing from the officials.

24 mins: Leicester finding their feet again a little now, Gray takes the ball off Iheanacho before cutting in past Holding and firing just over.

20 mins: All Arsenal now and another great chance as Saka manages to skip past Albrighton down the left before his cross flashes across the Leicester goal, Nketiah and Willock not able to get on the end of it.

17 mins: Some lovely football from Arsenal around the Leicester box leads to Pepe being found by Willock in space down the right, he looks to cut back in which give s Fuchs time to slide and turn it behind for a corner.

13 mins: Early booking for Elneny after the Gunners midfielder clips Gray as he looks to burst through the middle.

12 mins: The fast start has died down a little now with both sides enjoying short spells of possession, Saka and Nelson looking a good combination for Arsenal down the left.

6 mins: Fast start here as Leno is called into action after Iheanacho is played in one-on-one behind the Arsenal back three. Leno manages to get out the the ball before Holding then just pokes the ball away from Maddison in the Arsenal box.

4 mins: Fine stop from Ward in the Leicester goal! Nelson charges in from the right and fires to the far corner, Ward diving to his left and tipping over. That would have been some goal.

2 mins: Iheanacho looking to make his mark early on here, a big header from Morgan and the former Man City man swivels and volleys first time but drags it across Leno’s goal.

We’re up and running at the King Power.

It looks like David Luiz will captain the side in the absence of Pierre-Emerick Aubameyang who has been given the night off, along with new boy Gabriel Magalhaes.

William Saliba and Alex Runarsson are both only on the bench tonight as they wait for the chance to make their debuts.

It’s a strong bench, too, with the likes of Ceballos, Willian and Lacazette among Arteta’s options should he need them.

So Mikel Arteta makes seven changes to the side that beat West Ham on Saturday, with Bernd Leno, Sead Kolasinac, Rob Holding and Bukayo Saka the men to keep their places.

It looks like three at the back, with Kolasinac as a left centre-back and Saka at left wing-back, but I supposed it could be a straight back four, with Saka higher up the pitch. We’ll see.

Leicester vs Arsenal is scheduled for a 7.45pm BST kick-off on Wednesday, September 23.

This match will be played behind closed doors at the King Power Stadium with no fans due to be present due to government guidelines regarding coronavirus.

Mikel Arteta is expected to make a number of changes to the side that beat West Ham last time out.

The Spaniard could be set to hand debuts to Runar Alex Runarsson, who joined Arsenal on Monday, and William Saliba, who is being slowly integrated into first-team action.

After his Hammers heroics, Eddie Nketiah is expected to lead the line, with Reiss Nelson and Nicolas Pepe also likely to have their chance to impress.

In defence, Cedric Soares will be hoping to make his first appearance of the season, while Joe Willock is likely to get a start in central midfield.

Though this is an extremely difficult tie to call, Arsenal have been impressive in the way they’ve managed to get the job done of late.

They were perhaps less than fantastic against West Ham last time out, before substitute Nketiah nicked a winner five minutes from time.

Expect a tight affair – one which could go either way – but I think Arsenal will just take it.