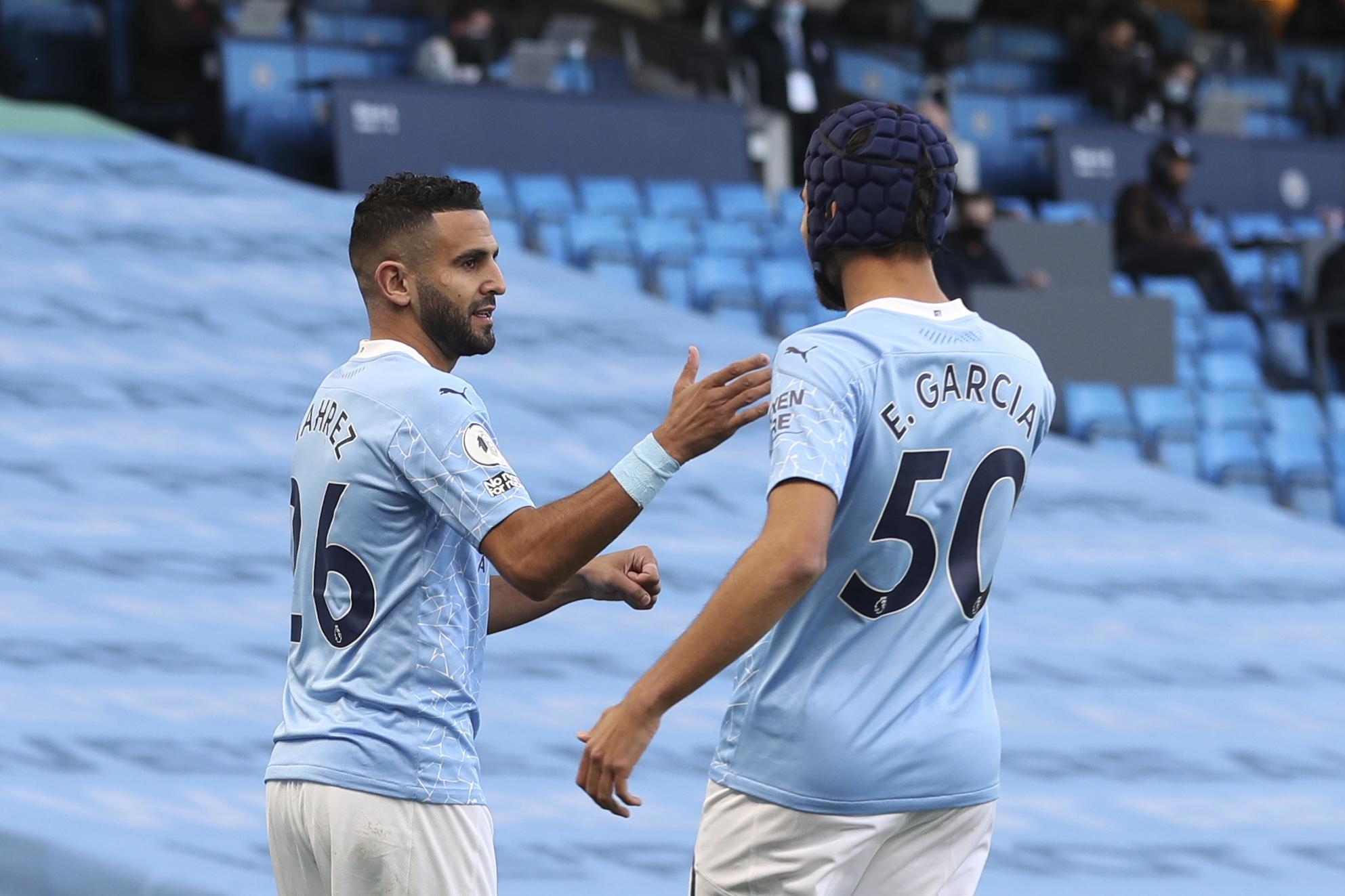 Manchester City will look to continue their perfect start to the season with back-to-back Premier League wins against Leicester this afternoon.

Pep Guardiola fielded a much-changed side as they saw off a spirited Bournemouth side to progress to the Carabao Cup fourth round on Thursday.

Last season’s runners up also got off to a good start in the Premier League, beating Wolves 3-1 away in their opening game of the season.

With kick-off at 4:30pm BST, follow the game with James Robson at the Etihad!

45 mins: Soyuncu finds Justin down the left after a buccaneering run forward. Tieleman’s corner is headed behind for another, but he won’t have time to take it. The referee blows for half-time.

42 mins: The defensive cracks are starting to open more and more from a City perspective. Harvey Barns is put through down the left once more but Garcia does well to recover to divert it off the attacker and out for a goal kick.

41 mins: Brilliant defending by Soyuncu. He shows his strength to hold off a sprinting Sterling who looked to be bearing down on goal.

James Robson at the Etihad

I’m not sure you could call it rope-a-dope, but Leicester have been coming into this game more and more. Barnes has caused City problems with his runs and on a couple of occasions Leicester had promising breaks that came to nothing. It was a sloppy penalty to concede by Walker, but Vardy forced him into a decision.

Vardy makes no mistake from the spot. He smashes it high into the top corner – nothing Ederson can do with that one. Game on.

What a turn of events we have here! Kyle Walker brings down Jamie Vardy in the box and leaves the referee with no option but to blow the whistle.

35 mins: City have the ball in the back of the net… but it’s disallowed!

Kevin De Bruyne’s set-piece deliveries are causing Leicester all sorts of problems. This time it’s Rodri he finds, whose header floats perfectly into the bottom corner. The flag goes up, however, and the goal is waved off.

33 mins: Brilliant play by City. Walker finds De Bruyne down the right-hand side, before the midfielder drills a low cross into the box, which is booted clear.

Foden and Sterling were perhaps guilty of being caught on their heels there.

28 mins: Leicester have really grown into the match now, enjoying a spell of possession in the City half. However, perhaps the telling stat is that City are 5-0 up in attempts.

Well, that will give the away side confidence if nothing else. They show great pace as the break on the counter, the ball eventually falling to left-back Justin, who gets his pass to Vardy all wrong. Chance.

De Bruyne whips in a teasing free-kick which Fernandinho heads straight at Schmeichel with just the keeper to beat. They had to score.

23 mins: And it gets worse for the Foxes. City break from the corner with De Bruyne. The Belgian is dragged down by Tielemans, who gets his name in the book for his troubles.

22 mins: Leicester go short with the corner before Justin swings a wasteful cross into the arms of a grateful Ederson.

21 mins: Leicester offer their first threat of the game as Albrighton finds Barnes on the left. He shows Garcia too much of the ball, however, and the defender sweeps it behind for a corner.

James Robson at the Etihad

This has been more like a practice match than a Premier League tie. City are in complete control and just camped in Leicester’s half.

Leicester have offered next to nothing going forward so far. They are obviously a threat on the break, but there’s been little sign of them being able to spring any kind of attack.

18 mins: And it’s not just possession City are enjoying, they’re making good use of it too. Mahrez plays Sterling in with a cleverly disguised ball, but his effort is weak and Schmiechel saves.

17 mins: Rather extraordinarily, Manchester City have enjoyed 81 per cent of the possession so far. Leicester are struggling to get hold of the ball and are yet to mount an attack.

13 mins: The home side continue to press and probe, as Rodri wins the ball outside the Leicester box, before firing a right-footed effort high above the bar.

10 mins: Mahrez sends a through ball behind the Leicester defence looking for Sterling. And for a second, it appears as if the England international is through, but he tripped Evans and the whistle is blown.

Manchester City vs Leicester is scheduled for a 4.30pm BST kick-off on Sunday, September 27.

This match will be played behind closed doors at Etihad Stadium with no fans due to be present due to government guidelines regarding coronavirus.

TV channel: The match will be shown live on Sky Sports’ Premier League and Main Event channels, and is available via Now TV

Live stream: Sky Sports subscribers can stream the match online via SkyGo and the SkyGo app.

Manchester City go into this game as undoubted favourites but a Leicester side who have started well will certainly give them a stern test.

Guardiola’s side were not at their best against Wolves but secured the crucial three points having entered with a six-point deficit having started the season a week late.

Though Leicester have amassed two league wins in as many games, I expect a fitter City to put on a show as they continue their early title challenge.

Manchester City and Leicester are certainly no strangers having met 120 times in their history.

It’s the home side who enter the fixture with the better record, having won on 61 occasions, as opposed to Leicester’s 30 wins, alongside 29 draws.

City have won three times on the bounce against Leicester, including a 3-1 victory at the Etihad last season.