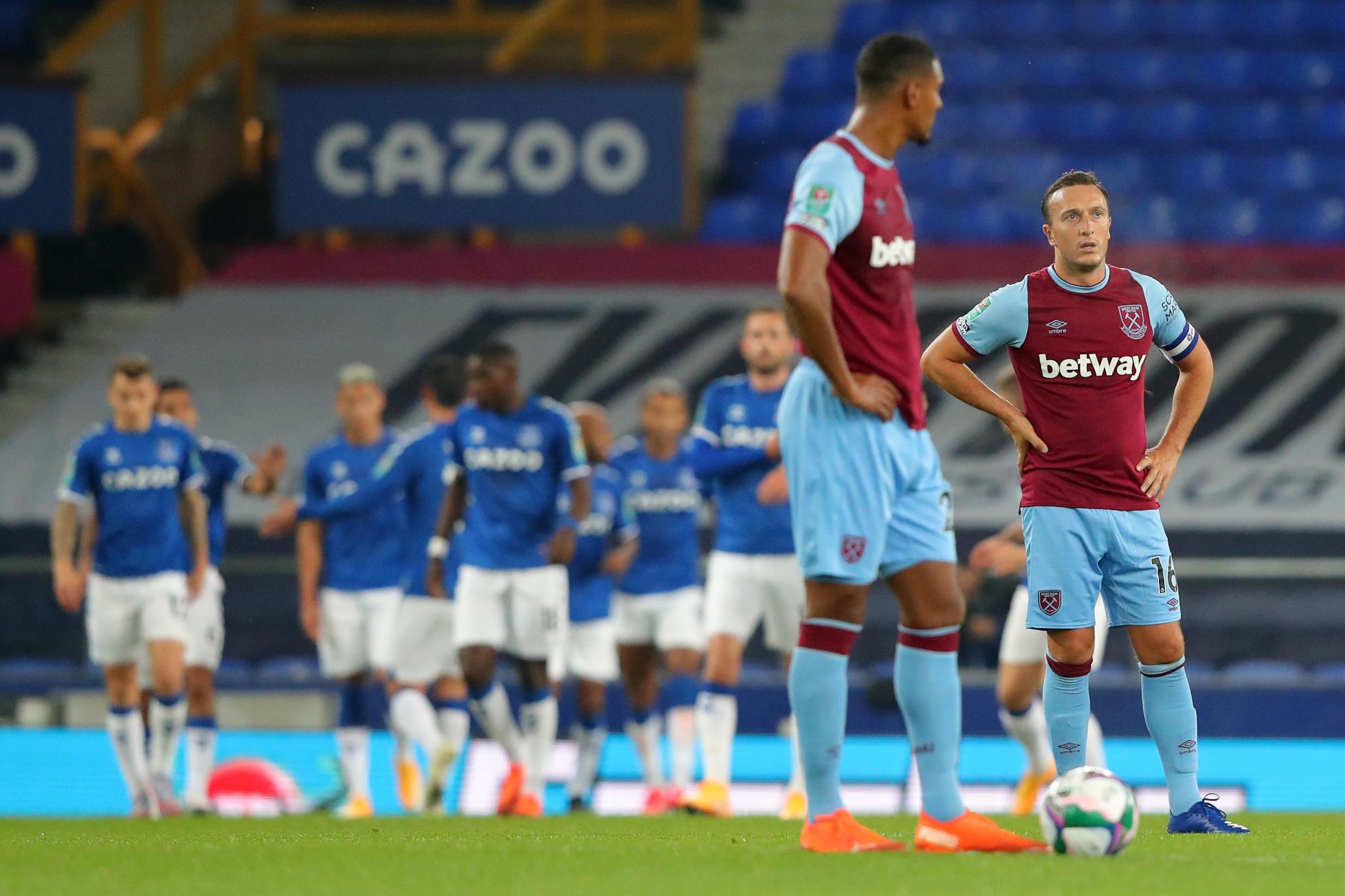 West Ham have been knocked out of the Carabao Cup following a 4-1 defeat at Everton.

A Dominic Calvert-Lewin hat-trick on top of Richarlison’s deflected goal saw the Hammers drop out of the competition on meeting Premier League opposition for the first time.

David Moyes, working his last game from home in self-isolation, decided against sticking with the back three which had brought progress against Arsenal and success in the win over Wolves. Instead, resting the legs of Angelo Ogbonna, Declan Rice dropped into a back four who looked scarcely protected from Everton’s attacking trio by Mark Noble and Robert Snodgrass.

It took just over ten minutes for the Toffees to find a way through, Michael Keane under very little pressure on halfway, lifting the ball over the top of the Hammers back four and into the path of Calvert-Lewin, who controlled wonderfully and poked home his sixth goal of the season and further his case to be included in Gareth Southgate’s England squad tomorrow.

The hosts went close to adding a second not long after when Darren Randolph was fortunate to tip Richarlison’s effort over the bar after he had cut through West Ham with ease. The Brazilian had a goal ruled out for a close offside minutes later.

From there West Ham steadied things somewhat but could still not create clear cut chances. They were improving with every minute that went by, however, with Manuel Lanzini heading just wide in the final minutes before the break.

They may not have wanted the break to come given the improvement, but they didn’t show it. Snodgrass pulled the Hammers level just 26 seconds into the second half when he whipped a wonderful curled effort from left to right through a number of bodies and past Jordan Pickford into the far corner.

Whereas the Hammers had taken most of the half to hit back, their hosts appeared almost insulted they’d even considered equalising. Immediately James Rodriguez sprung to life in midfield looking to get things moving before Richarlison slipped through the back line and struck the near post with a driven effort.

The former Watford man had deserved a goal, but needed a helping hand to regain the lead. On the counter, he drove down the left before cutting in and looking for the far corner. The effort struck the back of Rice and left Randolph wrong-footed.

The Hammers responded well as Everton’s players dropped like flies, both Richarlison and Allan forced off injured. Sebastien Haller drew a stop from Pickford with a bicycle kick and the pressure for a leveller was growing, only for Everton to kick them in the teeth.

Alex Iwobi, on for Richarlison, saw his effort cannon back off the far post, but Calvert-Lewin was waiting in the middle to tap home before anyone could stop him. His second goal was poacher’s instinct, but his third was pure class. The scoreline was perhaps harsh on the Hammers, but Calvert-Lewin ruthlessly exposed their back four in slipping away to pick up Gylfi Sigurddson’s ball through and finishing clinically beyond Randolph.

Timo Werner transfer latest: What we know so far as Chelsea...