A giant set of Olympic rings returned to Tokyo’s waterfront on Tuesday after maintenance, with officials hoping the symbol will help build enthusiasm for the coronavirus-postponed Games.

Promising vaccine trials have boosted Tokyo’s hopes of holding the Olympics, now scheduled to open July 23, 2021 after the pandemic forced the unprecedented decision to delay.

The 69-ton interlocking rings were installed in Tokyo’s Odaiba bay area at the start of the year as the city began the final countdown to the Games, but were towed away in August for maintenance and inspections.

They returned Tuesday with a fresh coat of paint and plans to light them up at night.

“We are working very hard so that we can hold an Olympic Games in which people will feel safe,” Tokyo city government official Atsushi Yanashimizu told reporters.

“With the installation of the Olympic symbol, we would like more people to feel that the event is approaching soon and to feel excited about it.”

A poll in July showed that just one in four people in Japan wanted to see the Games held in 2021, with most backing either a further delay or a cancellation.

There are also reportedly concerns among sponsors, with organisers tightlipped on how many will extend their contracts.

Olympic and Japanese officials have said they remain committed to holding the Games next year, and International Olympic Committee head Thomas Bach said in Tokyo last month he was “very, very confident” that spectators will be able to attend. 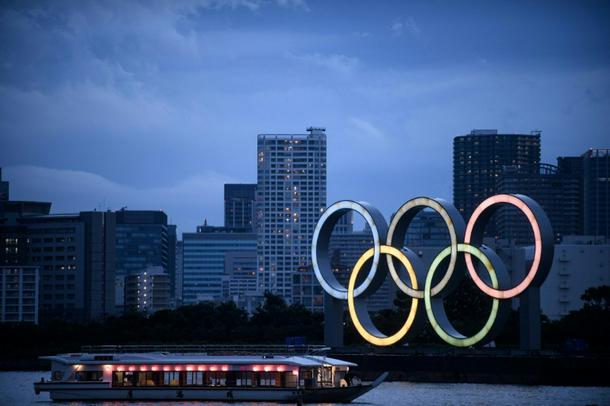 The rings will stay in place until the end of the Olympics, and will then be replaced by the Paralympics symbol in mid-August.

“We would like many people to come here and see it and feel the momentum, while being cautious about virus prevention” said Yanashimizu.