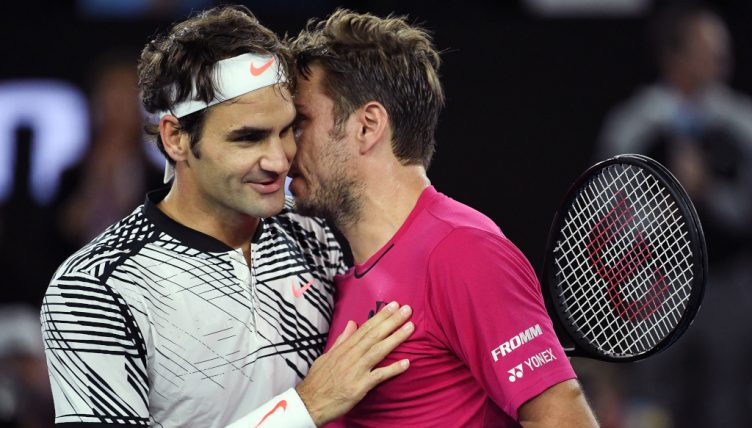 Stan Wawrinka has nailed his colours to the mast in terms of the greatest player of all time (GOAT), saying Roger Federer is “the best player ever so far”.

Many believe Federer, Rafael Nadal and Novak Djokovic will go down as all-time greats, but there is a quite a discussion about who will be the overall GOAT once they hang up their rackets.

Three-time Grand Slam winner Wawrinka was asked about the Big Three during an Instagram Live session with Chris Evert and didn’t hesitate to say fellow Swiss Federer is the “best”, but he did add “so far”.

“He’s the best player ever so far. He’s been winning everything, beating everybody. He’s better than the other players and better than me,” he told Chris Evert via Instagram Live.

“His game is a completely different style. He puts you under pressure all the time, he’s so aggressive, changes [pace] a lot. For my style of play, that’s tougher than someone who keeps [hitting] the same ball.”

Wawrinka was also full of praise for Nadal, who sits on 19 Grand Slams, and described how tough it is to play against the King of Clay.

“I have difficulties to return the ball well because of the spin he hits and the lefty serve,” he said. “He doesn’t have the best serve, but he makes it difficult for me and always puts me directly under pressure.

“On clay, it’s impossible. Forget it.”

Wawrinka feels his power game has paid off when playing against reigning world No 1 and 17-time Grand Slam winner Djokovic.

“Novak is the one in the Big Three that I like to play the most, even if I’ve lost to him many times. I play the best against him and have been lucky to peak against him in Grand Slams,” he said.

“I feel like I can keep my power with him for three, four or five hours. Those three times I beat him, I kept playing my game.

“[But] even after beating Rafa or Novak, they’re still way better than me. They’re still in a different category than me. I beat them one time here or there, but I know it’s a different league.”

‘What a great guy’ – Roger Federer expecting a battle against...